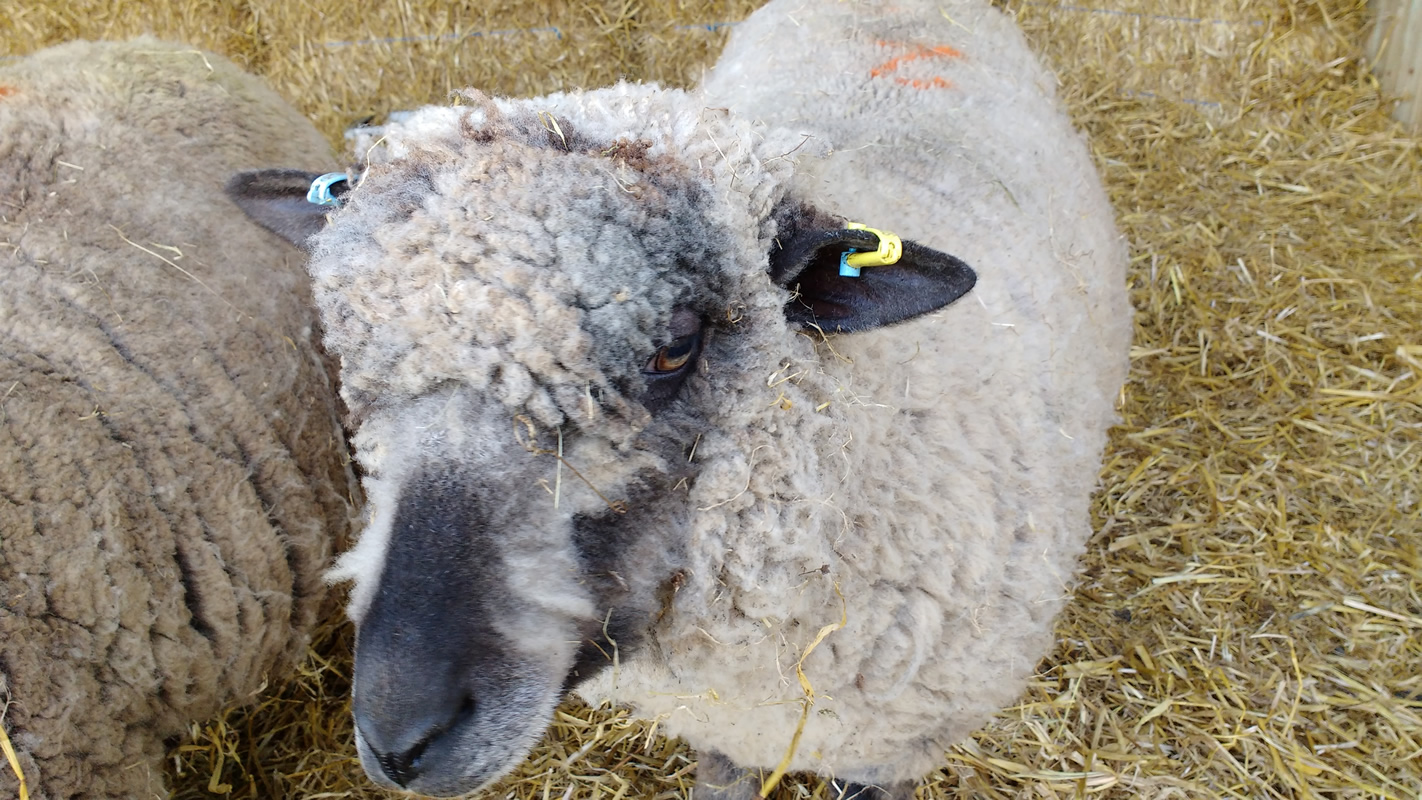 When we decided to move last summer, we spent a lot of time discussing whether we could lamb or not.  Aside from ensuring the welfare of the sheep, there were all sort of logistical considerations to overcome.  In the end, we decided it would be best to skip a year.  We were disappointed but at the same time, philosophical as we knew it would be for the best.

Then, just before we were about to move, we spotted a post in the Ryeland Flock Book Society facebook page – for sale, coloured ryeland ewes in lamb.  They were not cheap, but it was a chance to lamb.  And they were in Yorkshire, not close, but not too far away from Auchenstroan either.  We decided to get 3.  We duly paid a deposit and arranged to collect them after we had moved.  They are not due till late April so we had plenty of time.

The day before collection, Nicole hitched the trailer to Landy and set off to Harbro for lambing supplies.  Of course, they asked her to reverse into the shed, a maneouvre that, by all accounts, didn’t go quite to plan.  However, back at Auchenstroan, undaunted, Nicole drove back and forth with the trailer in order to move all our hay out of the lambing shed.  By the end of it, she was a dab hand at trailer driving.

So, the Friday following our move, after our marathon journeys up the motorways, we headed off with dogs and trailer to Yorkshire.  It was a dreich, windy day and not that pleasant on the A66 as we crossed the Pennines.  The A1(M) was a bit busy too, but eventually, we found ourselves at the Millbridge Farm.  A nice place with all sorts of animals, sheep, pigs, goats, turkeys, chickens, all milling about.

Of course, the first thing he said was “reverse your trailer up here”.  Basically, through gate, round the corner, past some farm machinery, up a narrowing lane avoiding a hay stack and up to a smallish gate.  I looked at Nicole aware of her new found mastery of reversing trailers.  She just smiled and said “good luck” or words to that effect.  Well, unbelievably, I managed it.  It seems we are both becoming more adept at maneuvering trailers.

Anyway, we met all his coloured ryelands and picked our three.  We have a triplet, a double and a single.  We loaded them up, dealt with the paperwork and off we headed, back to Auchenstroan.  The weather was even more dreich and windy on the way back and a bit nerve racking up in the hills.  Nevertheless, we made it back, Nicole driving the second half giving me a much needed rest.

And the girls arrived safe and sound and were coaxed into their temporary home, the lambing shed.  And they are quite content.  We are giving them plenty of attention and handling and they are starting to enjoy it.  Ursi, the eldest, is already quite precocious, Vi started out very shy, but now approaches us happily as does Vera who started out most perturbed by the dogs, but has now realised they pose no threat.  And lambing is on for this year – yippee! 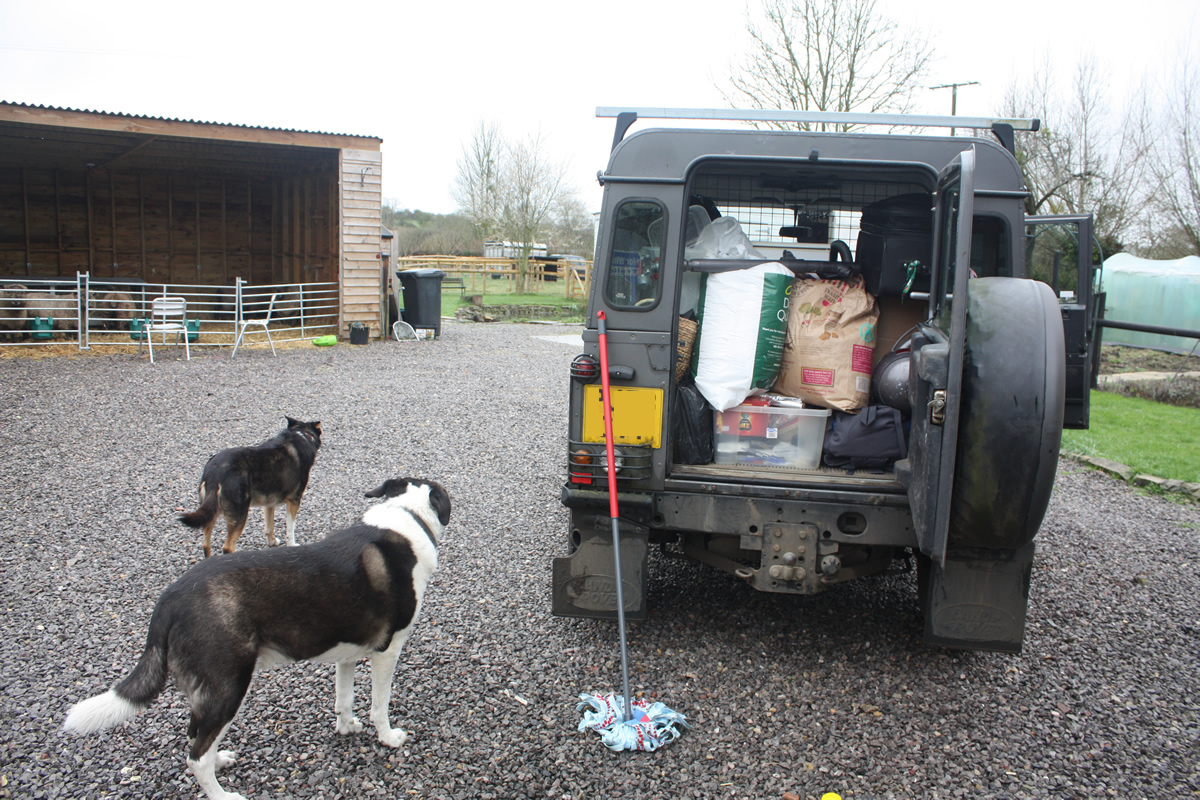 After weeks of waiting and planning, it was time for the move.  This was actually split into two moves, the first moving the animals and the second all our house stuff.  I had got my qualification enabling me to move the sheep that distance.  We have too few to get hauliers interested and we also liked the idea of moving them ourselves.

So, I hired a larger trailer to ensure the girls would be comfortable and we set up our own trailer to move the two boys.  Our plan was to travel overnight so as to avoid the worst of the traffic.  It is also a bit cooler at night and hopefully the sheep would sleep most of the way.  I don’t think either of us were really looking forward to this drive, Somerset to Scotland.  This was particularly true of Nicole who, only a few years ago, struggled even to drive on a motorway (let alone hundreds of miles up one – with a trailer).

We packed up all the animal feeds, spare water and a number of emergency items.  Just in case!  Our worst nightmare was breaking down and going over the 8 hour limit.  But we’d done what we could, the trailer and both the cars serviced.  Also, the trailer hire people (Boulter Mead) were great, they hired me a trailer which would suit my freelander (which has a pulling limit of 1.9 tons).  The Landy Defender would have no trouble with our 8ft trailer and its two passengers.

We had brought the sheep into the shed a couple of days before and given them an anti worm medication as directed by our vet.  We held them in quarantine in the shed.  They seemed pretty relaxed about it all.

Around 9pm, we got started.  First we loaded the chickens.  They had pride of place on my front passenger seat, albeit in a box.  Then we loaded the two boys.  Months of constant handling and halter training paid off big time as they were  safely tucked up in minutes.

Then we loaded the girls two at a time, again using the halter.  This was not as easy as it sounds as once we had some girls in, then when the next two were brought to the trailer, those in thought it a good idea to try and get out!  Still, it wasn’t long before they were all tucked up too (sheep nuts are just too tempting for them).  They were split into two bays of 5 for their own comfort.

Soon, we were off.  In convoy, we headed across Somerset towards the M5.  Of course, the first motorway sign told us the M5 was closed further up.  In fact, the M5 was closed and also the M6 in two places.  The diversions were not too bad, just follow the lorries!  That said, the diversion that took us through Birmingham was not much fun.  I spent much time checking my mirrors to make sure I didn’t lose Nicole at a roundabout or traffic lights.  Nicole stuck to me like glue.  And the diversion signs were almost non-existent.

However, there were no traffic jams and, despite the closures and diversions, we made good progress.  I had to stop twice for fuel as my car was just drinking the stuff.  We just about managed 55mph so most of the lorries were overtaking us.  But, we got here, just as dawn was rising.  I parked the trailer in the field leaving myself a tricky reverse to attempt later.  Nicole parked on the track just outside the gate.

We led the two boys up into their new field.  Having been used to, at most, 3/4 of an acre, they now have about 5 acres to themselves.  Even now, they are still exploring it a little at a time.  Then out popped the girls, quite happy and started immediately tucking into the fresh grass.  They too were led to their new pasture, a hilly field with rocks, fresh water via a stream and views of the Galloway Hills.

Then, we released the hens who just instantly loved their new surroundings.  Two days later, they were merged with the resident flock and under the watchful eye of the cockerel, they settled in and made new friends.

Then, after a couple of nights rest, I drove back down to take the trailer back.  I drove overnight and it was a hard drive.  I got to Bridgwater about 6:30am, slept for an hour, had a cup of tea and handed the trailer back when they opened at 8.  Then, back to West End Barn to finish the packing.

Everything had gone really well up till now.

First, the removal lorry was delayed due to a wheel problem.  Then, when it did arrive, it slipped off the drive and nearly into the pond.  It was too soft to dig out.  Things were not looking good.  Luckily I knew a man with a tractor.  To be honest, I knew a few of the farmers, so I started ringing round.

I got lucky.  One had just got back and he came straight round.  I have to say, I could not believe how easily the tractor pulled the lorry out.  It was over in seconds.  To say we were all relieved would be an understatement.  The guys worked really hard to catch up.  They didn’t get it all done on the Monday, so we walked down to the pub for a beer and a decent feed, then finished it in the morning. By midday they were gone.

I had a lot of cleaning to do!

By mid afternoon, I was on my way.  I was really lucky with the traffic and was reunited with Mrs D later that evening.

Next day, the lorry arrived and we unloaded it.  Again, the removals guys worked really hard.  By 6:30pm we were done.

The move was finished, well almost, the tractor and gypsy caravan are not here, but those are other stories… 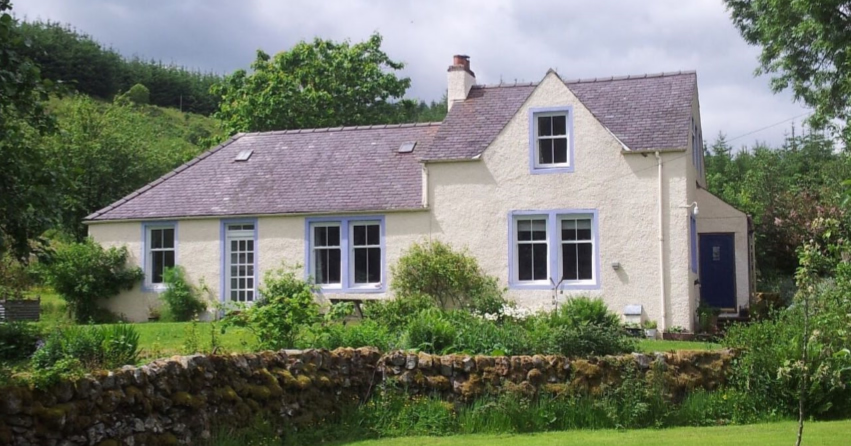 Well, it has been a while since we have posted anything here.  There are numerous reasons, all too boring to get into.  Nevertheless, we have been very busy indeed.

Over the summer our lambs grew and developed unique personalities.  Most moved on to new homes.  Woodpecker Larry, our first, headed off to breed with a small flock in Somerset.  Warlock, the cutie pie was snapped up by a lovely couple in Wales and he too should be close to being a dad now.  We kept Wart and Wallace and hope to breed or swap them for breeding.  Plus our girls, some went to a home nearby, some went just a bit further and some now have a lovely life in Devon.

But we kept Witchy and she has grown into a precocious young lady.  It’s so great to see, especially given her precarious start in life (Witchy’s story).

However, our time at West End Barn draws to a close.  We have purchased 27 acres of Scottish countryside in Dumfriesshire.  As well as 5 massive fields, we have woodland, a small loch, rivers, walks – it’s just perfect.

And we can’t wait to introduce all of our animals to their new home.

We drive up this week, driving overnight to avoid the traffic.  I have done my qualifications for moving sheep that distance and sorted out all of the paperwork.  We’ll be going in convoy as we have to keep our rams and ewes separate (for obvious reasons).  It’ll be a long drive (we’ve already done it once as a dry run), but it will be worth it.  We have outgrown our patch here and the sheep will really enjoy the bigger fields.  Plus it’s all a bit hilly so they should get a bit fitter.

And while we couldn’t lamb them this year (as we didn’t know when the move would happen), we do have a surprise in store, so watch this space.

And finally, I am looking forward to getting back to my homeland and may even try a bit of that kilted yoga lark 🙂

Our new site will be at www.auchenstroan.com.

Category: Tales from the Barn
For Sale from our Shop
Categories