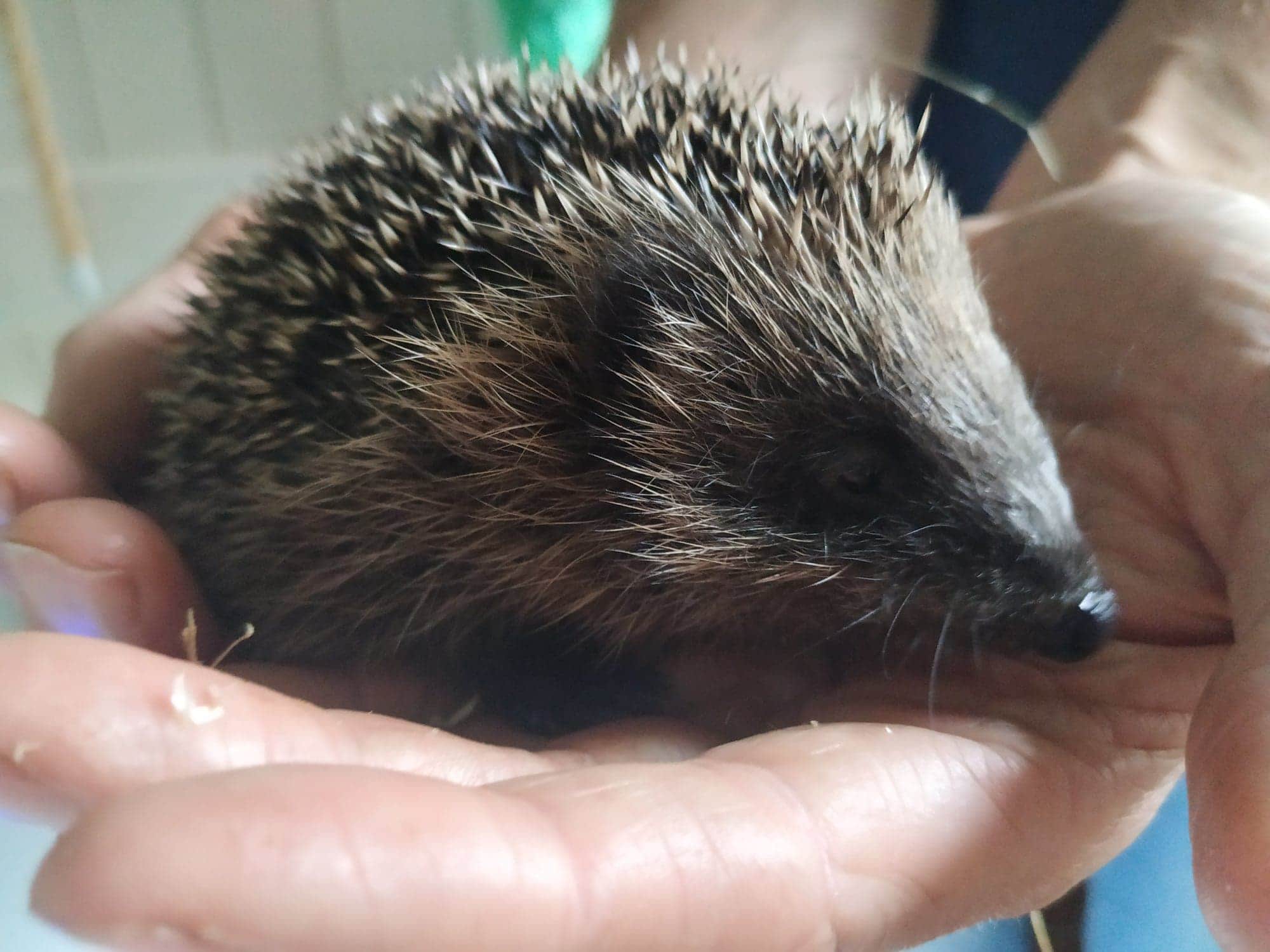 Last autumn, I found a small hedgehog which we overwintered (see Hoggy Released).  This can happen a lot, late litters mean they just don’t have time to put on enough weight to hibernate.  Without help, they wouldn’t make it through the winter.

What’s a bit more unusual is to find one needing help in the summer.  A few days ago, just as I was settling down for the evening, I got a phone call from a neighbouring farm.  They had spotted a hedgehog in one of their fields and were worried about it.  They had heard about us overwintering hedgehogs so we had sprung into their minds as knowledgeable.

I pulled my boots back on and set off, grumbling slightly to myself if I am to be honest.  I was expecting to find nothing but as I arrived at the spot they had described, I found a tiny hedgehog just sitting there.  All grumbles evaporated in an instant as I scooped it up into my hand.  It must have got separated from its mother and I think it had been there for hours.  It had done well to survive as the field was small and full of sheep and so it had been at risk of being accidentally trodden on.  It was tiny, but fully formed. By that, I meant it had adult prickles.  That was a good sign, it was likely no longer reliant on its mother’s milk.

It was so small it fit snugly into one hand as I ferried it safely back to the house.  It was perfectly calm all the way, just sitting there quite happily.

On getting back, we weighed it and it was a mere 125g, tiny indeed.  We also inspected it for ticks and fleas and found none, another good sign.

Now, having had Hoggy over the winter, this time we had everything we needed.  I left Tiggy (which is what we named him) with Nicole and fetched the hedgehog rescue kit.  I set it all up in the pantry displacing the homebrew.

That done, I prepared some food.  We had a cupboard full of dogfood so no problems there.  I set out about 100g of food, mixed in a little water and added some dried calcium worms.

As I was placing him in his new accommodation, I was suggesting to Nicole we might need to get a pipette and hand feed him.  She started unwrapping one but before she’d finished, Tiggy had located the food and was tucking right in.  That was a great sign.  Once he’d eaten, we helped him find the bed all filled with fresh hay.

That night he ate just over 80g of food and put on a mighty 44g.  He must have been really hungry.  After, 4 nights , he now weighs 200g, so good progess indeed.  He has settled in well and has begun trashing his run, typical hedgehog behaviour (they like to dig).  Another good sign.

At this rate, he should be ready for release late August.