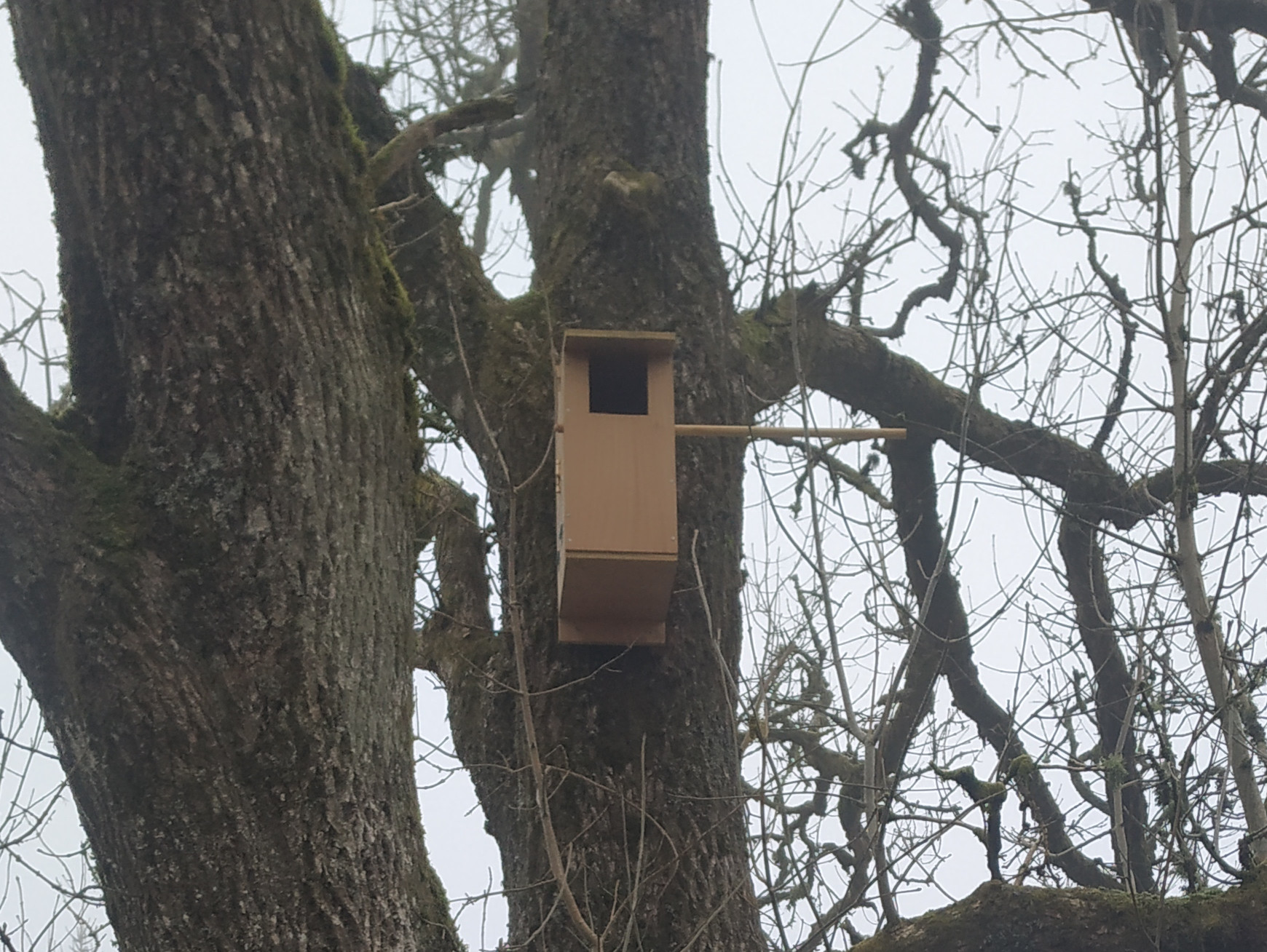 Pretty much every night we hear tawny owls at some point. Recently, they have been hooting all around us as we take the dogs out for their evening stroll. For some time, I have been telling myself I should put up an owl box.

Back when the weather was warmer and the ground not white, I actually constructed one. I looked at a few designs and settled on the one provided by the RSPB. Well, I am a fellow of the RSPB so it seemed only right. Plus I liked the roosting bar. It didn’t take long to make and, with three coats of wood preserver applied to the outside, it was ready. I put it in the shed where it sat patiently as the weeks went by. I kept telling myself to get it in place sooner rather than later as the owls would need time to get used to it. Leaving it to the spring would be too late.

Last Sunday, I grabbed the bull by the horns, or the ladder by the rungs, and got ready to put it up. I had found the perfect spot, on a large tree trunk at the edge of some woodland. It’s also quite close to the house so easy to monitor, but not too close (tawny owls can be a little territorial in the breeding season). Of course, I couldn’t get the ladder in place, it being heavy and the tree unobliging. Thankfully, our neighbour was on hand to help. Ladder set, I forced my dislike of heights to one side and scurried up. Perched carefully on the top rung but two, I apologised to the tree and put in a nail as gently as I could.

I scurried back down, picked up the box and, a little more gingerly, headed back up. I should point out that the ladder was kind of leaning a little to the right beyond which was a steep slope down to a river. It was also frosty and slippy. These thoughts were at the forefront of my mind as the tree did everything it could to block my progress by snagging the owl box in its branches. Taking deep breaths, I negotiated the three dimensional puzzle posed by random twigs and the long owl roosting bar. It was tempting to lean back, but…

Anyway, that was the easy part. The hard part was getting the owl box in place, i.e. trying to hook it over the nail. Cue much random manoeuvring of said box with increasingly burning arms and interesting vocabulary. Finally, more by luck than design, it popped into place. I secured it, then made my back to terra firma to admire my handiwork.

Now, it’s wait and see, but hopefully it will be used by owls next spring.