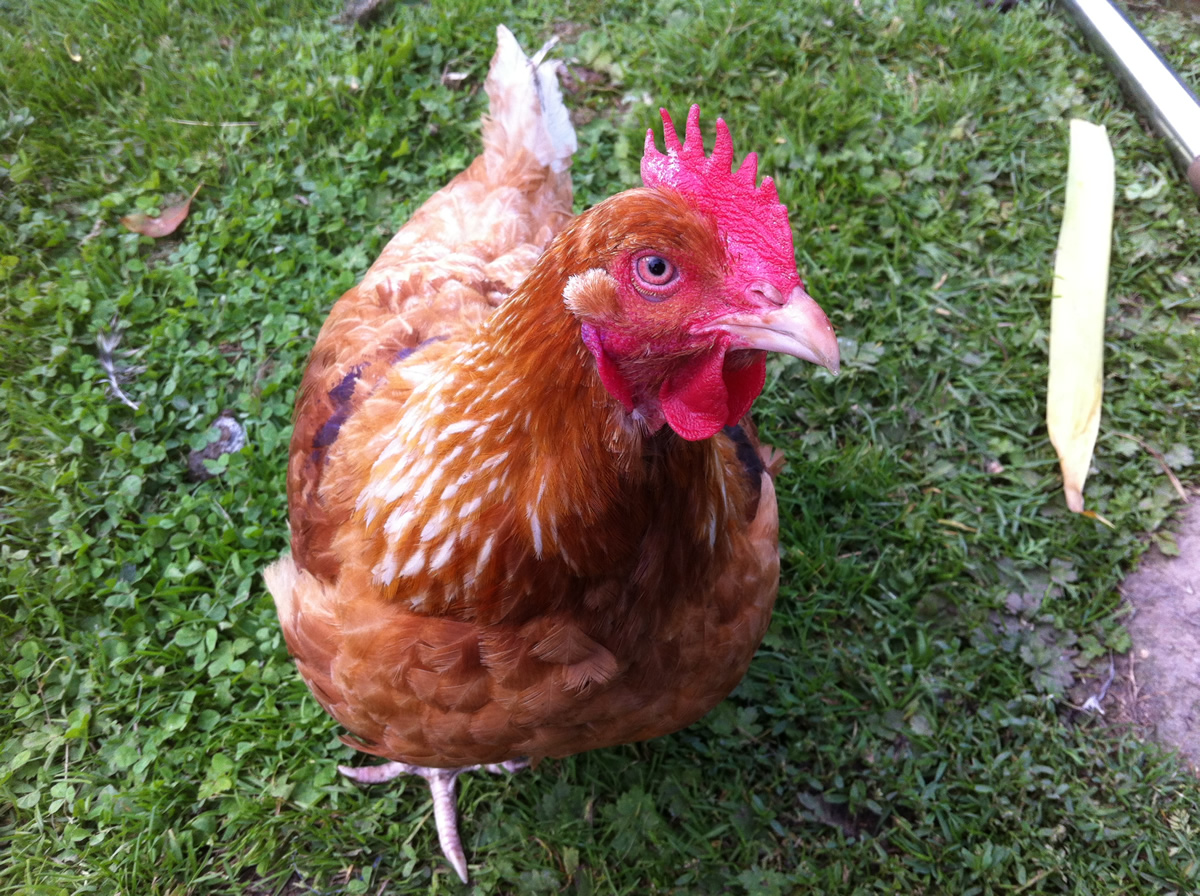 In June, we got 4 ex-battery hens to complement our flock.  We also wanted more eggs and with one hen getting on a bit and one with chicks, we were down to two laying hens.  We have had ex battery hens before (we got 5 when we moved here) and it is great to give them a taste of the outside having spent their lives imprisoned indoors.

Of course, merging hens is never easy. But we have quite good facilities, about 20 square metres of foxproof runs divided into 3.  We can create one mega run of 18 square meters, but we keep the small run separate for emergencies.

We put the 4 ex batteries newbies into a run with the one survivor from the last batch of ex batts.  She wasn’t impressed, but with odds of 4 to 1, and the chance of company again, she soon settled.  We’d had to separate her because, after an illness, she became a target for the other hens.  She soon established herself as top of this little flock, though.  All in all, they seemed really chilled and enjoyed stretching out into the sun.

Meanwhile, next door, the 2 chicks were growing well and Hattie was proving herself an excellent mother.  I always feel it’s easier to keep the chickens in with the other hens as it saves having to merge them in later.

The setup allowed the two flocks to get to know each other but with a fence inbetween them.  As you may know, hens are not very welcoming to newcomers and will try to kill them.  So the ex batts need time to build their strength up.

Now, none of the hens were getting out.  The grey hens couldn’t come out as the chicks would have been easy targets for birds of prey and cats.  The ex batts needed to settle in.

Then, the trouble started.  One hen (Daisy) got a bit over-enthusiastic about establishing her place as number 2.  She drew blood from Little Red. Emergency!!  Hens and blood, bad mix.  They are birds of prey and once they have drawn blood, they will keep going.  It can turn into hen cannibalism.

So we removed Little Red, treated her wounds, and put her in the small run.  So far so good.  Only, then Daisy turned her attention on the next in line and so Alby was suddenly bleeding.  So Alby was removed, treated, and put in with Little Red.  Only then Little Red turned on Alby.  So finally, Daisy was isolated and the other two returned to the main run.

That was OK, but could only be a short term solution. If we kept Daisy apart too long, it would be hard to merge her back in.

So, we let them all out to free range (the newbies that is, the original flock remained in the run due to the danger to the chicks).  That helped a bit, but poor old Little Red kept getting pecked.  We treated her, sprayed her with purple dye and hoped for the best.  We separated Daisy while they were in the runs (they are only allowed out when one of us is here – foxes – we can let our big guard dog out with them to keep them safe). It worked, with the stimulation of being out, Daisy became less aggressive.

Peace, at last, only…  red mites!!!  Dealing with the other issues, we’d taken our eye off the ball and now had to treat a red mite infestation.  Thanks goodness for Smite and plastic, easy to clean hen houses.  All were stripped down, sprayed, cleaned and then dusted with anti-red mite powder.

Then, Hattie, mother of the chicks, went ape and started bullying the other adult hens, big time.  The cockerel just seemed to let her (don’t believe what you read about cockerels keeping the peace).  She drew blood!

So, a careful operation, totally unplanned, was put into place and somehow, with the minimum of fuss, Hattie and her two chicks were placed in the small run and Daisy returned to the main run.

The good news is that we can now let the original flock (minus Hattie) out so they will be very pleased.

And this weekend, we may go for the big merge.  Watch this space!!!