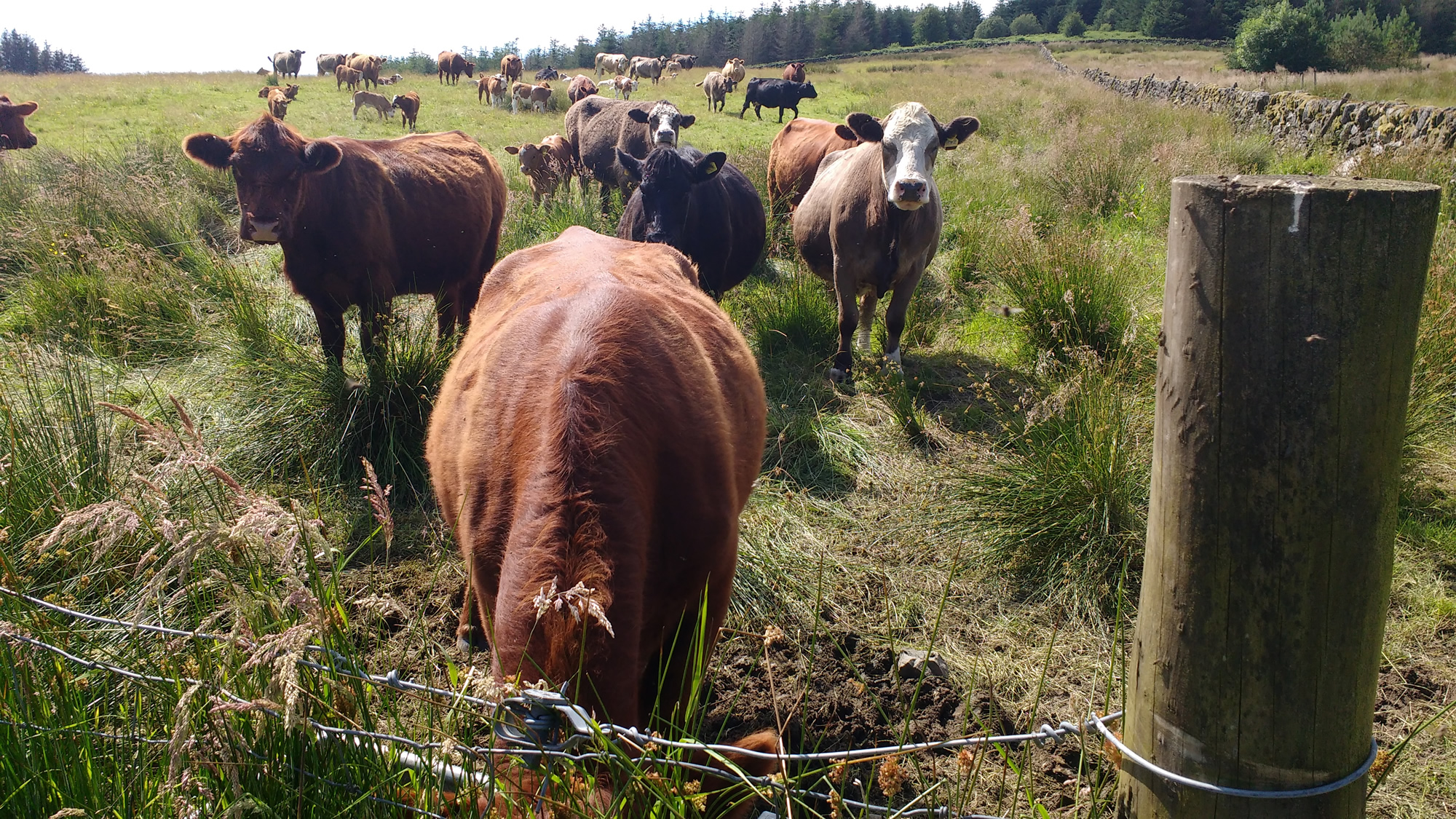 As previously mentioned, we borrowed some cows from a neighbouring farm (cows return to Auchenstroan).  With them nicely settled in, I headed off to Edinburgh to meet a flamenco guitar master (for some guidance) and then a beer with friends.  All excellent.

I returned Saturday morning to a water emergency.  With the weather being warm, the cows had drained all our livestock water tanks.  Also, the burns that feed our tanks had dried up.  Nicole had taken some water over but the quad bike cannot tow that much and it’s also very slow to fill a bower from a tap.

So, it was out with the tractor, hook up the 600 litre bowser and set the pump up in the river.  We are on spring water here and during the summer filling a 600 litre bowser would empty our water tank (shared by our close neighbours).  So, it’s best to pump it up from the river.  One of my neighbours helped for which I was very grateful.  I also filled two 20 litre water carriers while I was at it.

Once full, the bowser was towed to the tank and connected so the tank could be filled.  While that was happening (it takes two hours for the bowser to drain through the standard hose connector), I went to fill the trough with the 20 litre carriers.  At first, the cows were not sure what I was up to, but as I started pouring water into their trough, they formed an orderly queue headed by the brown cow pictured.

Once I had poured the two containers in, she dipped her head and drained the lot.  This could be a long day, I thought.  If you’re wondering why the troughs were not filling automatically, they were, but just not quickly enough.  The have a ballcock valve much like that found in a standard toilet.  The water flows in, but like an old tap.

Anyway, I zipped back and forth with the quad fetching water while the bowser offloaded into the tank.  On the second visit, the bull was at the front of the queue.  His head was almost as wide as the water trough.  He watched me with mildly suspicious eyes while I poured the water in.  His head was in straight after the first container, so I just poured the second one in next to his head.  He drained the lot and, sated, he wandered off.  It took about 4 trips before the queue started to thin out and 6 to get the trough back to full.  It also took three bowser fulls to fill up the tank (around 1800 litres).  Once done, I thought that was that.

Sunday morning is my turn to check the animals.  I found the cows had made the executive decision to move field trampling a fence in the process.  Not much could be done, so we opened up more space for them and they seemed quite happy.  And they still had water.

Monday morning, all the water was gone, again.  They had managed to move a trough off its stand and so tilt it and drain the entire system.  I inspected all the troughs followed closely by a number of cows.  All empty.

Tractor out, pump on, refill…

Only this time, there was no water coming down.  In a mild panic I worked my way up disassembling each connection.  No water, but I could find nothing wrong with the system.

I gave up – we asked the farmer to take them back a day early as it was hot and they needed water.

Now, we have had trouble with this tank but I thought it was repaired.  In fact, the tank had appeared to be holding water again, so I had filled in the repair trench (before it collapsed).  I dug it all out again, but everything was fine.  And then the water started to flow into the troughs.  It turned out to be a small hump in the pipeline which the water level had to get above to start flowing.  Panic stations were all for nothing.  Only now, one of the connections was leaking.

Thankfully, I have a box of pipe connectors so I was able to repair it.  The pipe had shifted a bit so I had to put in a piece to lengthen the pipe so it would reach the connector properly.  By the end of the day, I had refilled the tank, repaired all the pipework and the troughs were all full again.  This time, only sheep would be drinking.