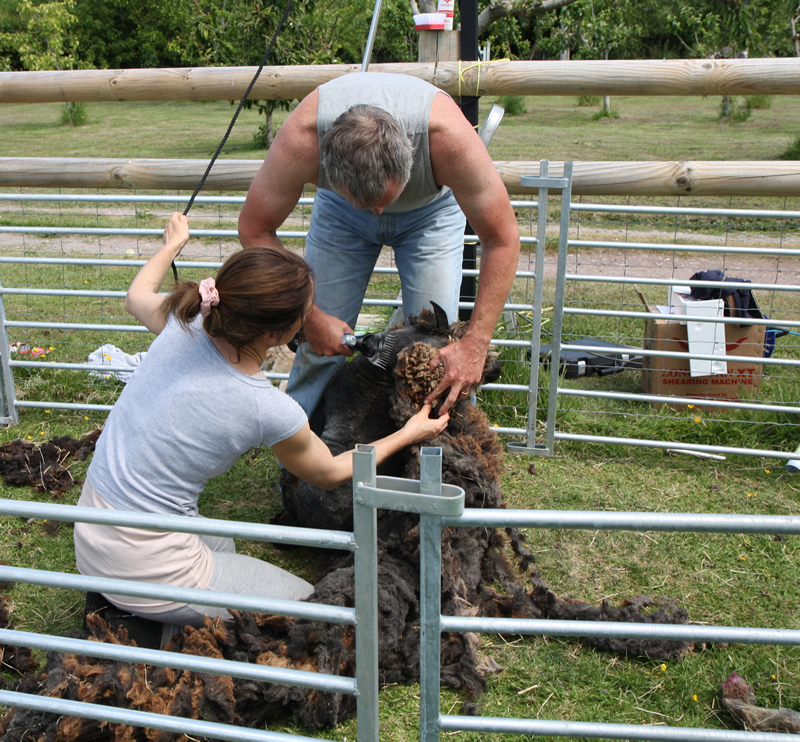 On a warm and sunny June day, we set out to shear our three sheep.  We set up the pens and the shearing equipment and all went smoothly.  Then we gathered the sheep into the holding pan without incident.

Now, we had decided to shear in the field rather then bring them up to the stables. The first problem was that having sat the first sheep down in the holding pen, we couldn’t drag her to the shearing station (as we had done on the course) because the ground was not smooth.  OK, we let her through, sat her down and got ready to get shearing.

Problem two, our sheep are entirely unlike the ones we worked on on the course.  Those had lovely great bare patches on the their tummies and brisket so it was easy to get started.  Ours are completely covered, from their heads to the tips of their toes.

So shearing the tummy are took a bit longer than planned.

Problem 3, there was a slight slope and so we ended up getting out of position rather too easily.  That caused some problems in manoeuvring the handpiece.

However, we worked as a team and slowly but surely we managed to shear her.  On the bright side, with it being hot and having new equipment, the handpiece did glide smoothly through the wool.

But, those tricky legs and the head were not easy, mainly as we were taking great care not to hurt her.

Now, we got nearly, very nearly to finishing the first sheep when disaster struck – the drive shaft broke.  The actual driveshaft ( the bit that spins) sheared.  That wasn’t the sort of shearing we had had in mind.

So we had to finish off with the hand clippers and abandon the shearing for the day.  Tomorrow, on the phone to order a new one.

And next time, we’ll take a bit more care on getting the positioning right as we suspect we put a little too much pressure on the bendy bit (don’t know the techie term for it).

So we now have one sheared sheep and two still covered in wool.