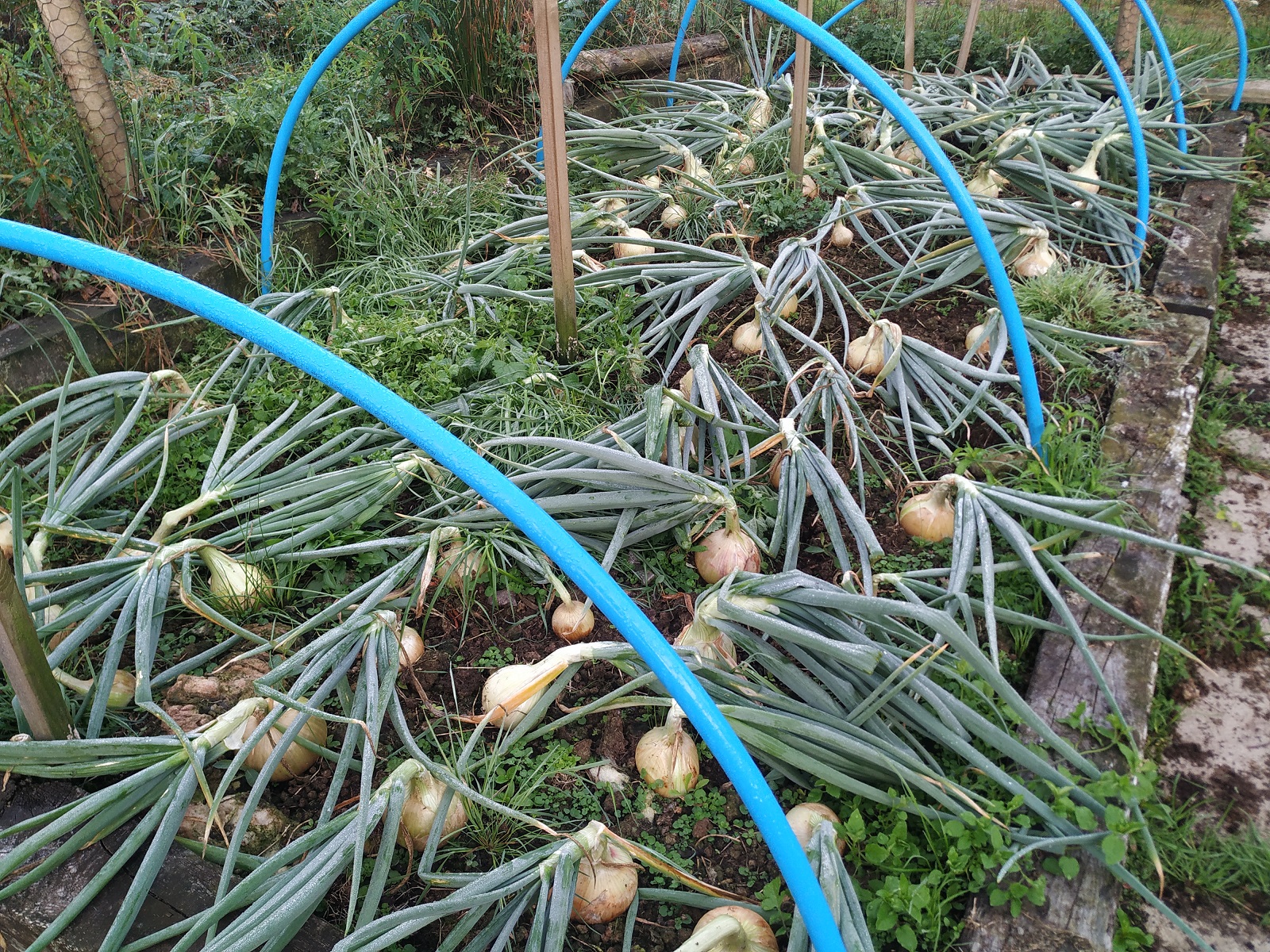 It has been a good year for the veggies. The new polytunnel produced plenty of salad and tomatoes are ripening thick and fast. Outdoors, everything we planted has grown well. We’re not sure if it is down to the amazing, hot summer or all our preparation, probably a bit of both. The soil, this year, has certainly been the best we’ve had, courtesy of a large annual covering with mulch.

As a rule, we try to grow vegetables that are harvested when needed. This includes carrots which remain quite happy in their purpose built box, turnips that will survive outdoors through the winter and beetroot which can also be left in the ground till needed (hungry mice notwithstanding). Summer crops such as spinach and chard are picked as and when needed.

Two vegetable that do need harvesting are the onions and the cabbage. The onions are huge this year, some the size of grapefruits, and we are delighted with that. We have been waiting for the leaves to bend over as they reach maturity signalling they are ready to harvest. All those that had done so were harvested a week or so ago. The rest I gave a helping hand by bending the leaves (as shown in the above picture).

The harvested onions have their roots trimmed (carefully avoiding nestling worms) and are dried on the Auchenstroan designed and patented onion drying rack (a pallet raised on two chairs).

Once dry, they are strung in the traditional way and hung ready for use. We reckon we’ll have at least 10 onion strings this year which is pretty good going.

Once harvested, the preparation for next year starts with a layer of cardboard to suppress the weeds. It’s called the ‘no dig’ method and I’m fine with that, believe you me.

Once the cardboard is laid, I’ll cover it in mulch, a mixture of composted sheep poo and home made garden compost. It will be laid 10-15cm thick, the thicker the better as the soil really benefits from it.

The cabbage has grown well and today I harvested the first, it was the size of a football and weighed over 3Kg. There’s not much you can do with cabbage other than eat it or make coleslaw, so we are, for the first time, making sauerkraut. The first batch was prepared today. The cabbage was chopped, shredded in our tiny vegetable shredding machine and then mixed with salt and herbs in a bucket. It all went to plan and I was amazed at how much it all shrinks as the salt does its work.

The feeling pleased with myself lasted only till I realised it needs about 6 weeks of fermentation to get the best flavour. Having only two suitable buckets and around 10 cabbages presented a conundrum. So, this week kas now been designated sauerkraut week and I will spend the days shredding cabbages and building up one large bucket of fermenting sauerkraut.

At the same time, I’ll be keeping an eye on the tomatoes and making sauce or soup as and when I have to. Also needing watching are the apples, it was this time last year that cider vinegar production got underway.

While all that is going on, Nicole has been harvesting blackberries, pulling out nettles and cutting back brambles. And, of course, we’re both working, Nicole making rugs and me editing my book (now that it’s back from the editor) and also working on my dry stone dyke course.