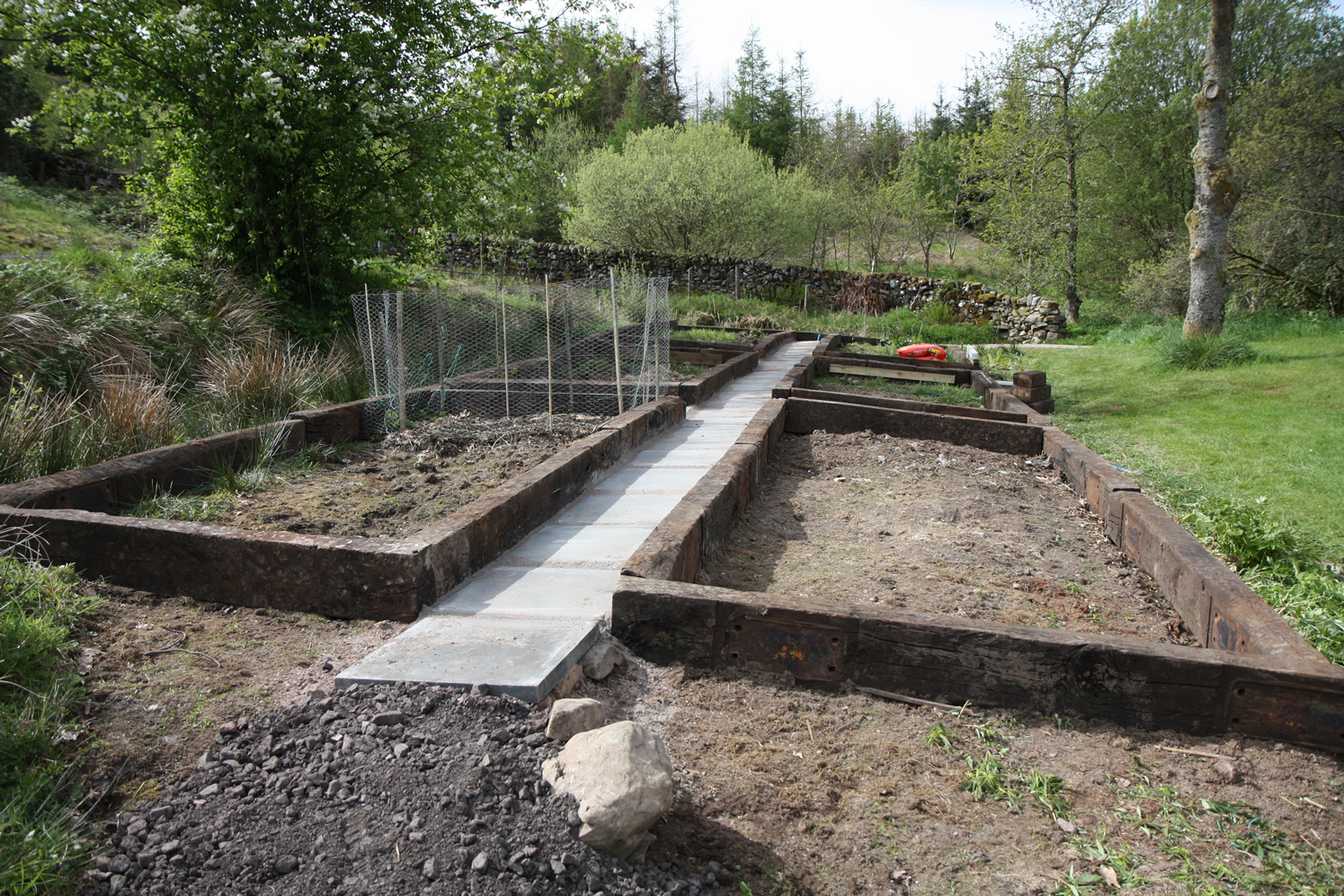 “After lambing” we said to each other, “it will get easier”.  To be honest it has been a long winter with little respite.  Having livestock is a 7 day a week responsibility and we sometimes think we have taken on too much.  So, after lambing we thought we’d start to scale back a bit.  And most of the infrastructure is now in place, perhaps we would be less busy.  Maybe we could even plan a weekend away.

We could border it with sleepers, one of us suggested.  Sounds like a plan.  I did a small plan on paper and soon after, 36 sleepers were duly delivered.  We had to sell some farm machinery to pay for them.  Well, we had already decided making hay was to stressful so the hay bob went.  And we’d never used the post stomper or fertiliser spreader so they went too.

One fine Saturday morning, I headed down with the tractor to start moving them.  I could get two into the front loader.  Now, I don’t know if any of you have ever tried to move a railway sleeper.  They weigh nearly 100Kg!  By the end of the day, I’d managed to move 12 of which a grand total of 4 had found their final resting place.  Talking of resting places, at this point I was to be found lying on the grass, knackered.

On the Sunday, I managed to get 5 more in position.  This is not a job for one person I concluded.

And that was one of my better decisions because, in two days we had it all laid including the concrete slabs making up the path.  And I even had the strength to lift a beer afterwards.

In the meantime, Nicole had completely weeded the existing patch including ripping out carpets laid as weed barriers that had rotted and failed to stop any weeds.

We are delighted with the results.  Just have to fence it off to keep chickens, rabbits and dogs out and then we can start planting.  The fence posts are in but a delivery company let us down and pret

ended two attempted deliveries of the chicken wire we’d ordered.  They’d never been anywhere near us – don’t you just hate that?  (DX in case you’re wondering).

Oh, and never, ever, buy a Gardman rose arch.  Made that mistake – it’s in the bin and that’s two hours of my life I won’t get back.  Now we have two bought solid steel arches to frame the two gateways into the veggie area.  More photos when they arrived.