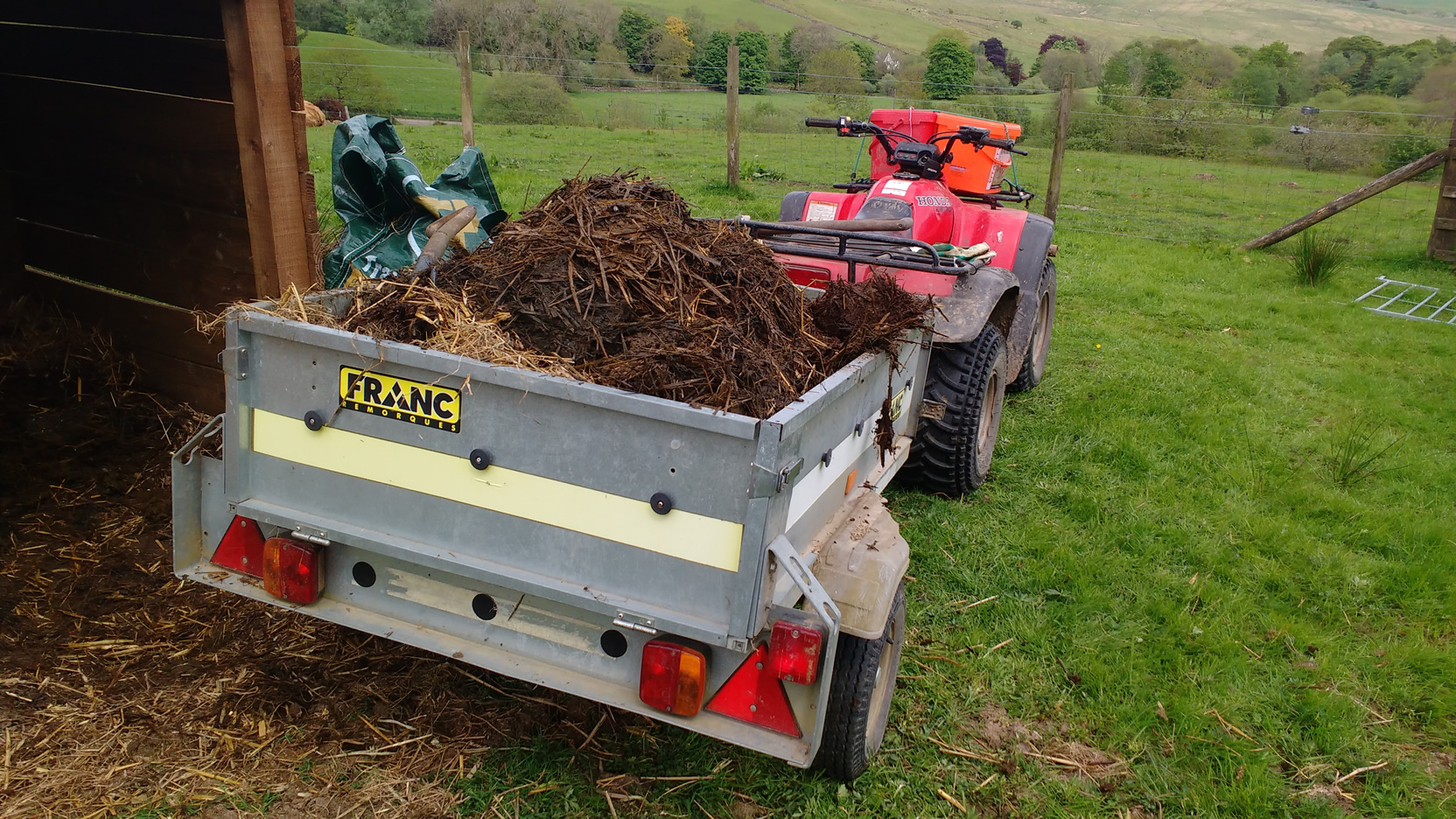 Having got our veggie patch built, our thoughts turned to mulch.  We have compost bins but, to be honest, by the time it has all rotted down it doesn’t go that far.  Happily, our sheep provided the answer.

Last year I built them a field shelter.  It is heavily used by the sheep, especially when it rains, snows or even when it’s sunny for the shade.  Well, it seems to pretty much have been raining since last June and we certainly had plenty of snow over the winter.  So, Brookside (as we call the field shelter) has been well used in the last year.

Now, sheep, while great, do have one or two not so pleasant habits.  One of these is the tendency to poo wherever they happen to be.  Even when sleeping.  I sometimes wonder whether they even bother to wake up.  In fact, you can tell where the sheep have slept because there is a gentle imprint in the grass and a pile of poo.

This is fine outside where sun and rain and even the dogs, who are partial to a bit of sheep poo, do their bit to dispose of it.  But in Brookside, the poo tended to linger.  So, Nicole dutifully lays down straw to keep things nice and clean.  However, unlike with horses, we haven’t mucked out.  Yet.

Time to muck it out and spread it on the new veggie patch we thought.  So while I was hanging the gates, Nicole headed off and duly returned with a trailer full of mulch.  We spread this.  If you have ever mulched, you will know how this went – a trailer full covers a postage stamp sized area!  After two loads, Nicole was starting to tell me how hard it was.  I went over to help (the gates having been hung).

Well, a year of poo, straw and trampling had built up a layer about a foot deep that was quite intent on staying exactly where it was.  Also, the shelter is about 5 feet high so it was bending over work and lots of banging heads.

Not one to complain (ha ha), I got stuck in on the excavation, or mining as Nicole liked to call it.  As I lobbed piles of strawey poo out through the doorway, Nicole moved it into the trailer.  Then, back over we went to spread it out.  We managed to cover two of our 6 veggie areas before seeking refuge in a bottle.  Well, we went to the pub actually where I had fish and chips and Nicole munched her way through two helpings of lasagna.

Next day, we used the tractor instead of the trailer.  We could drop the front loader much lower making it easier to load at one end.  At offload end, I could set it to wheelbarrow height which also made things much easier.  I don’t quite know how she did it, but Nicole mined the mulch out from Brookside faster than I could collect and spread it.  By the end of the day, one of the sheds (there are two) was clear and the veggie patch covered in a thick layer.  It looks great.

The only downside is that we have to do it all again in the other shed.  We are already thinking up strategies for the coming season which involve a more regular mucking out.  But, at least we are putting all this poo to good use.  It’s quite a good feeling really.  We celebrated with a take away pizza (neither us having enough energy left to cook).

And we decided to take today off :).