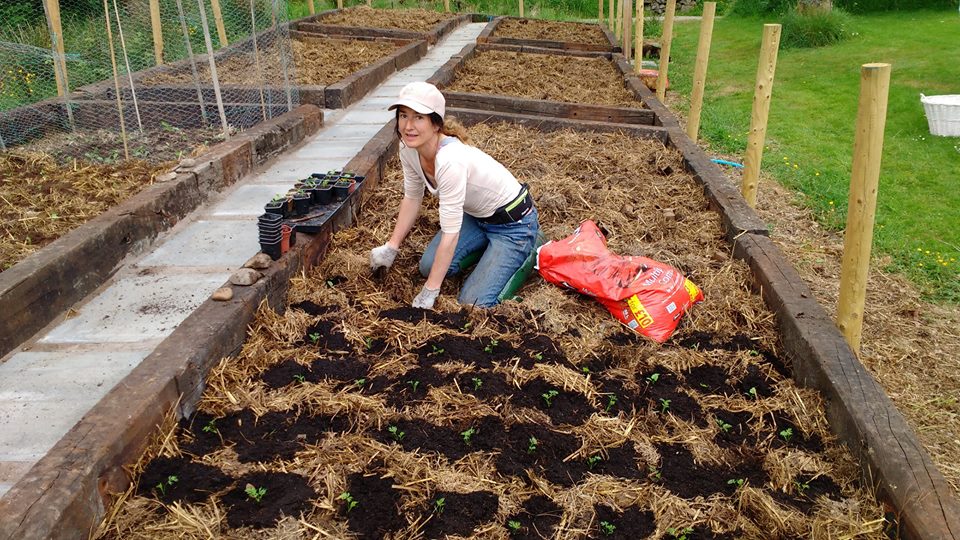 Where to start! We are finding out that owning land creates lots of work. Owning animals just adds more! We keep thinking we are getting there, but then we dream up new projects.

One example is the veggie patch already featured on this blog. It’s pretty much finished now. I added the rose arches over the gates as the final touches. No roses yet, they’ll go in in the autumn. Nicole has been busy planting it up. I keep saying I’ll help but I always seem to end up working on some other project. It’s starting to look fab with good crops of turnips, carrots, parsnips and sprouts. We’ll also have kale, courgettes and beetroot. They were sown direct and are not quite showing yet. All this planting was helped by two thunderstorms which gave everything a good soaking. More about water later.

Nicole has also been busy moving self seeded daisies out of the other veggie patch and into the borders next to the new veggie patch. So, soon, it will be surrounded with flowers. All that planting created the room for all our onions which Nicole finished planting today. We even did a bit of a landscaping (after yesterday’s storm) but the midges soon put a stop to that.

So, what have I been up to that has stopped me from helping? Well, the weather went from wet to dry overnight, and stayed dry. This is great, except that the grass growth was slow and our field water dried up, Annoyingly, the big tank we put in last year has sprung a leak somewhere and I think I am going to have to dig a hole to find it, a big hole.
Anyway, we have two rivers that are merrily running through our patch. So I suggested we extend one of the paddocks down to include a bit of river. The cows would certainly appreciate that!

So I have been off doing that, knocking in posts and fencing it all. The fencing is now all done but there are two stone dykes that need some repair where they have fallen down. If our sheep got to those, they’d be up and over in a flash. I think the cows would probably give it a miss though. So I’ll be repairing those later in the week.
It’s also infested with bracken which is poisonous to cows and sheep. So we’ll be down dealing with that too!

Talking of cows escaping, coming back from the garage one day last week (my new car had some faults needing fixing), I realised that one of the cows was the wrong side of the fence. In fact, Bluebell had taken down a bit of fencing and we reckon she’d been out for a day or two. We headed down to round her up wondering how it would go. Highland cows are pretty stubborn at the best of time. However, she was waiting by the gate. When Nicole opened it, she wandered back in of her own accord. Miracle!
In between all that, we had the sheep sheared on Thursday last. You may remember that Nicole and I did a sheep shearing course a couple of years back. Well that and the experience of shearing three sheep made us decide this was best left to the professionals. Finding shearers for small flocks can be a problem, but this year, on a recommendation, we managed to hire a top shearer.

They arrived with a professional rig on a trailer with two shearing stations and two shearers and a third person to roll up the fleeces. Our plans of leading the ewes in one at a time from the paddock evaporated in an instant. In fact, we ended up charging around and catching and rounding them up. We only just kept up with the two shearers but, of course, we then had to collect the sheared sheep and get them back. It was borderline panic for the duration, but they are all sheared, and it was a great job too. The sheep must feel so much better in this heat.

After that, we had to inoculate the lambs. Rather than rounding them up, we caught them one at a time. Nicole gave them the injection while I held them. The girls struggled like mad doing their best to headbutt me (by flipping their heads backwards). The boys, harder to catch, seemed only to shrug with vague indifference when the needle went in. Some of the lambs were very flighty – once they know you’re after them, they can move out of the way pretty quickly. Nicole’s pretty good at sneaking up behind them and catching their legs. One managed to wriggle out and tried to run past me. I’m not quite sure how I did it but a stuck an arm out and caught him and quickly had him in a hug. Which would have been great had I not, in my moment of self satisfaction, then stepped on some sheep poo ( we were on a hillside) and slid landing flat on my back. I held onto the lamb though, who was safe on my chest. We have to do it again in four weeks, perhaps we’ll pen them up. They might be a bit heavy to carry by then.

Nicole is on top of the sheep worming. We don’t blanket worm them. Nicole collects samples and we have the vet do an analysis so we know who to worm and what to treat them with. There are a few dirty sheep bottoms out there, often a sign of worms, and one of Nicole’s less exciting jobs is keeping their rear ends shaved (it’s called dagging) so that we can avoid fly strike.

In-between all that, we have been trying to comb the cows. They haven’t had much attention of late and Bluebell is not entirely sure about being combed. This is not helped by them moulting their winter coats which creates humungous knots. They are hard to get out, but amazingly satisfying when you get one.

And if that’s not enough, some of the chickens got infested with lice. So, we had to catch them and Nicole cut all the eggs off and we treated them to kill the adult lice. Sounds easy, but catching chickens is incredibly hard! You can wait till night time and get them out the chicken house – they tend to be quieter then. Bu these days, in mid June, that would be around midnight and we are fast asleep by then.

And tomorrow it’s Monday and back to the day jobs! We’re still waiting for that elusive day off! I haven’t even had time to take pictures of our sheared sheep or new paddock, but I’ll try and get some tomorrow and add them.