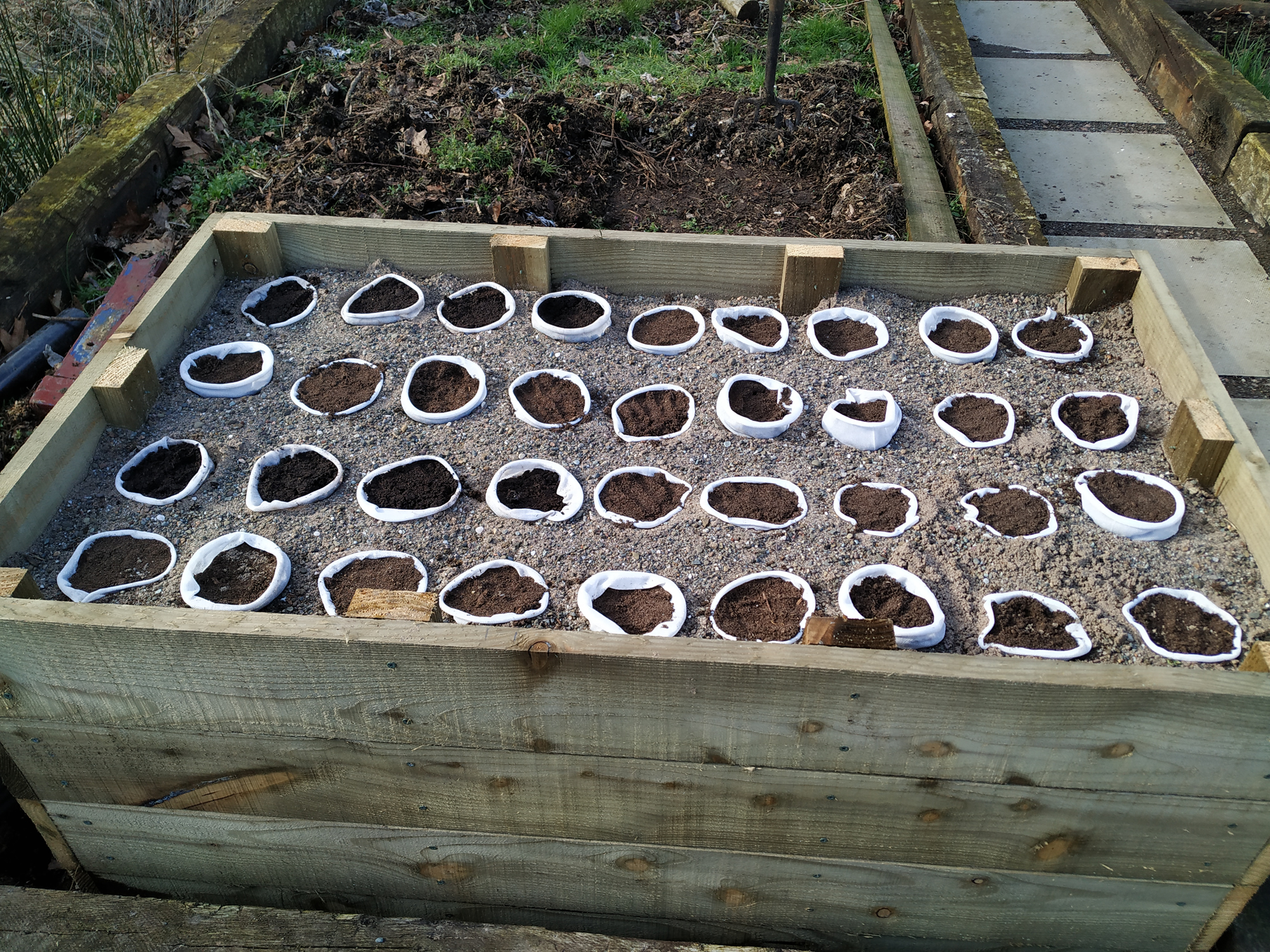 We try to grow as many of the vegetables we eat as we can.  However, in the last couple of years, we have been engaged in a battle of wills with numerous pests.  We have managed to outwit the birds and the butterflies with netting, but the slugs still do a significant amount of damage.

Last year, we had to keep replanting.  While the kale grew strong enough to cope with some slug damage, the rest of the crops that managed to get beyond seedlings fared badly.  In the end, we rescue a few beetroot, a reasonable crop of turnips and some badly mauled carrots.  There had to be a better way.

I had seen, on the TV, a programme about allotments in which carrots were grown in tubes.  Nicole did some research and found that while this was possible, they could easily overheat on sunny days.  The most promising solution was to build a box, fill it with sand and then bore out vertical tubes with a drainpipe.  These tubes could be filled with compost.  Undersoil slugs and snails would not be able to get through the sand thus the carrots should be safe.  The sand would also retain moisture and stay cool on hot days.

The box itself was fairly straightforward to construct (see stopping slugs and snails).  However, boring out the sand tubes was a bit more tricky.  It was quite hard to get the sand to stay in the tube. Sometimes it worked, sometimes half of the sand fell out back into the tube. It turned into quite an art getting the tube the right depth. One trick was to push the drainpipe in and then pack the sand down inside the pipe.  It took time.

Our addition to the design was to make “socks” into which the compost could go.  By doing this, we could pull out the old compost each year and replace it with new compost.  That’s the plan anyway.  We used the sleeves that you can by for underground drainage pipes.  These sleeves are built to let water through but not silt – perfect.  They will also act as an additional slug barrier.

By putting the sock into a piece of drainpipe, filling it, placing the drainpipe (and compost) into the hole, the pipe could be slid out leaving the compost tube in place.  This process worked well but was time consuming.  It took hours to do all 36 tubes.

We haven’t planted the actual carrots yet – the weather is a bit frosty right now.  We reckon they’ll be planted mid to late April.

Once planted, we’ll tie some carrot netting around the top to keep the more intrepid slugs and snails at bay.  Once the carrots are growing, it will be fine to remove the netting.  I’ll post updates as the year pans out so that you can follow the progress. Who knows, you may even be inspired to try this approach too.