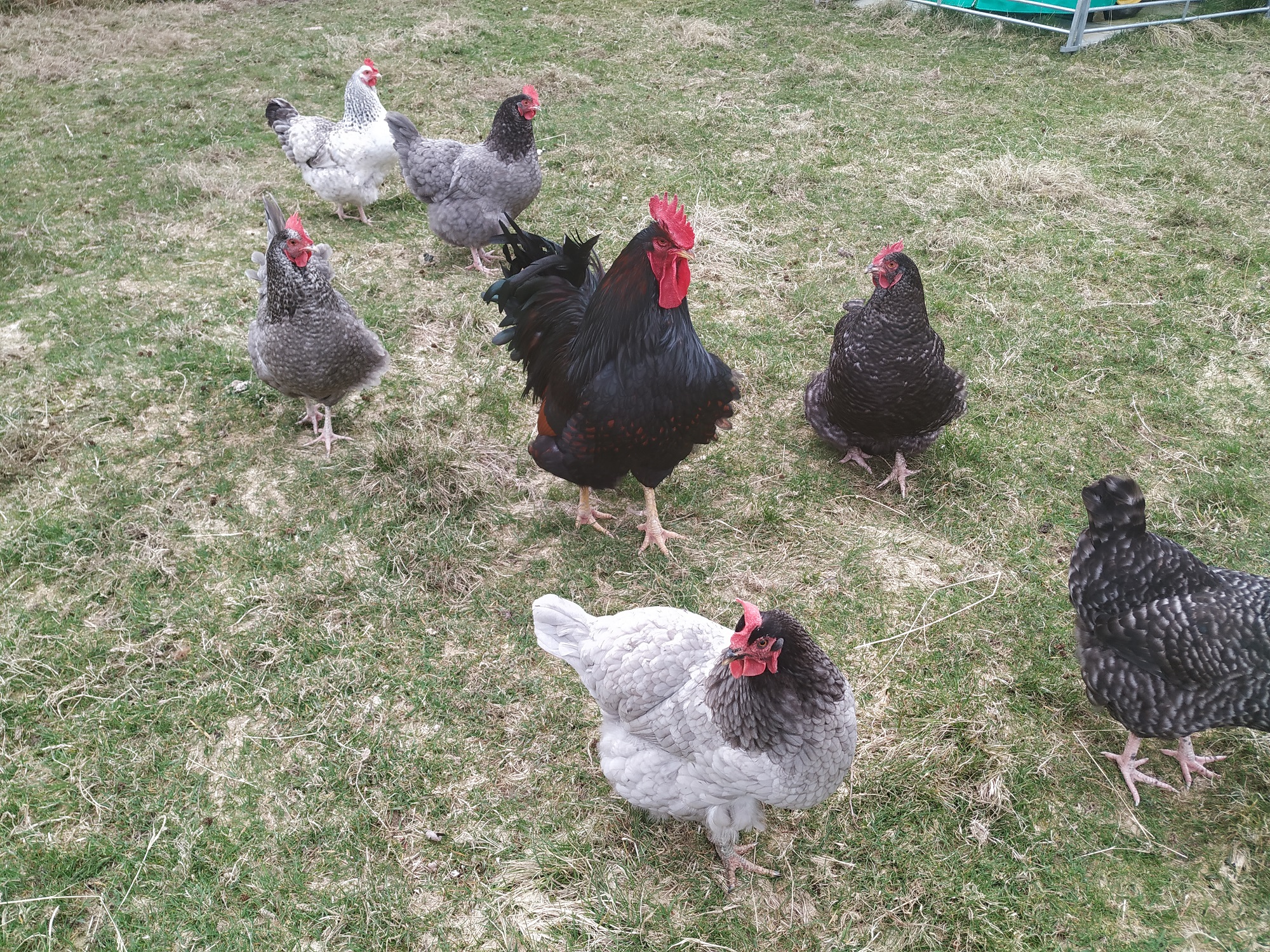 Our chickens have a large area in which they can roam freely.  They share it with the sheep as the sheeps’ winter hay and main shelter are located in this paddock.  At one end, there is a gate open to the fields.  While this has been open for months, the hens rarely venture out.  Occasionally, they have been seen just the other side but, as a rule, they are happy in their paddock.

That said, today the Cherokee the cockerel decided to go hill walking.  He tried to take the hens with him but only two would go, Mrs Mills Junior (MMJ) and Tina Sparkle.  The rest decided to stay put.

Off the three went, up the path, over the track and up the hill.  They followed the line of the fence right to the top where they found a gate.  Well, an open gate is a temptation for most animals and these intrepid three passed through gleefully.  They had a lovely time scratching around until one thought it might be a good idea to head back.

Down they came only to find that they had come down the wrong side of the fence.  The gate was long forgotten.  The three gathered together in the corner of the field looking wistfully at their paddock.  However, a 3ft high stock fence stood in their way.  Despite have wings and the capability to fly, this fence was deemed impassible.  So, they set off along the lower fence of this hill field looking for a way through.  When that failed, the worked their way back to the corner.

“I know what do”, said Cherokee , and headed up the hill.  Only it was not the gate he sought, but a vantage point.  “Cock-a-doodle” he exclaimed at the top of his voice.  Tina and MMJ looked at each other with world weary expressions.

However, this “cock-a-doodle-do” was, in fact, heard by myself as I set off to walk the dogs.  Not realising it was a cry for help, I simply congratulated Cherokee for his derring do as I walked past.

Nevertheless, knowing animals’ propensity for getting trapped in field corners, I decided to keep an eye on them.  Even our dogs can’t figure out what do when they find themselves in that same corner.  In fact, only the sheep seem to have the ability to work out how to get around via gates.

I alerted Mrs D and she thought it might be a good idea to lead them back.  Off she set with some corn to lead them through the gate.  The intrepid trio started to follow but, about half way up the hill, they decided they were going the wrong way and turned back down.   They did not realise they were being rescued.  MMJ lost patience and, without thinking, flew over the higher fence which was topped with barbed wire into the garden area. Observing this from the kitchen window, I headed out and picked up some tools and some wood.  It was time to build an emergency exit.  On the way, I shepherded MMJ back into the run via a handy gate.  Not a cluck of thanks, mind you.

Arriving at the field corner, I knocked together a chicken door and installed it in the corner of the fence.  Now, all they had to do was walk through.

But no, Cherokee decided that standing in front of it was far better.  I headed off to make lunch.  Mrs D tried to coax them through to no avail.  In the end, she returned for a more tempting snack than corn – mealworms.  That worked, Tina was straight through but Cherokee took his time before following.

By now the other hens had spotted possible tasty treats being dispensed and were on their way up.  Thankfully, Mrs D led them all back to their run and all were able to relax.

Hopefully on future hen walks, they will be able to make use of the hen door.