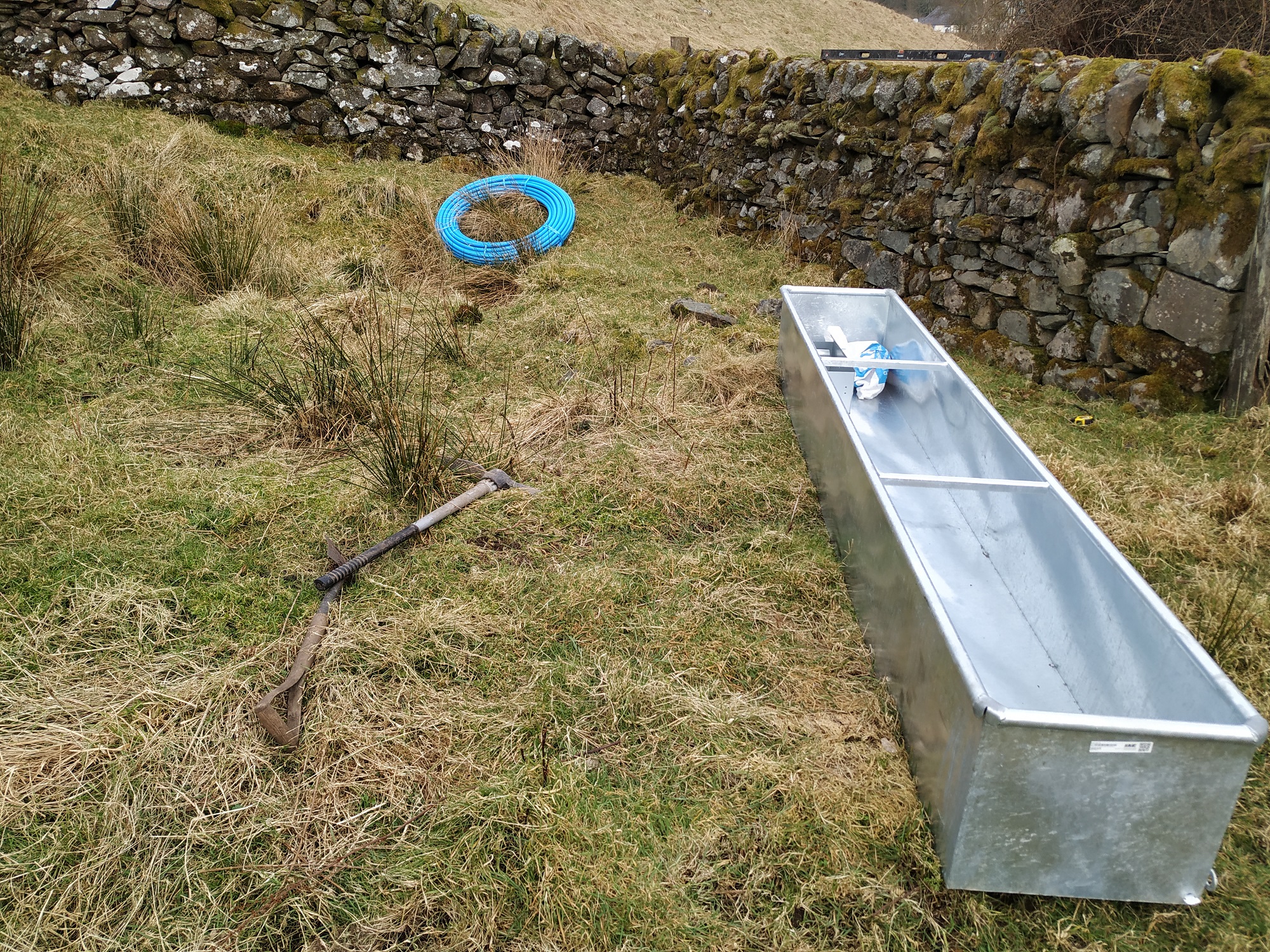 Once a year, we borrow some cows from a neighbouring farm.  We do these because they are good for the pasture.  They eat out the long grass making it accessible to the sheep and their poos are highly nutritious from the grass.

Last year they managed to empty our entire field water supply twice in two days (see cows drink us dry).  Since moving here, we have installed two underground tanks that collect water from hill streams and two water butts that collect rainwater from the field shelters.  These feed a network of troughs, one per field.  In total, it the system held about 2,500 litres of water.

“If we are going to get cows again,” I said to Mrs D, “do you think we should we install a large water trough for them?”

I set about locating and ordering one.  I found a large, galvanised steel trough that holds 545 litres.  Just the job; I ordered it.

Then COVID-19 hit and delivery was slightly delayed.  However, hats of to McVeigh Parker, it arrived Tuesday afternoon.  After the relentless wet weather we have been having, it has been pretty dry of late.  It only takes a couple of weeks without rain and the springs that feed the underground tanks dry up.  I had to get cracking.

First thing Wednesday morning, I was hard at work.  I had to level the ground where the tank would go.  This is never easy.  Also, this trough weighed around 70kg so I wanted to be moving it around as little as possible.  With pick-axe and spade, I hacked away at the ground.  Spirit levels were at the ready.  I got it to what seemed level and put the spirit levels on it.  Well, miracles never cease, it was level.  I put the trough in place and it was level.  I couldn’t believe it!

With the trough in place, it was a fairly straightforward job to unroll the pipe up the hill and connect it to the supply.  Just a bit of adjustment to the connectors to ensure no drips and all was ready.  I turned on the water (I fit isolation valves on all the troughs) and the water poured in.  However, it stopped at about three quarters full.

Off I trotted to inspect the tank – no water was flowing in.  Thankfully, there was a amall puddle at the intake point, the problem was the filter had become a bit blocked.  I cleaned it up and water started to flow in again, albeit slowly.

Next day, I checked and the trough was full.  The tank was only half full so I checked the inflow again.  Clogged up again – this time I replaced the filter (just a plastic mesh) and left it to it.

Today, the tank was full and the spring was dry.  I had installed the trough just in time to ensure a full water supply – now over 3,000 litres in capacity.  It’s a good feeling to know we have plenty of water for the animals should the weather stay dry.