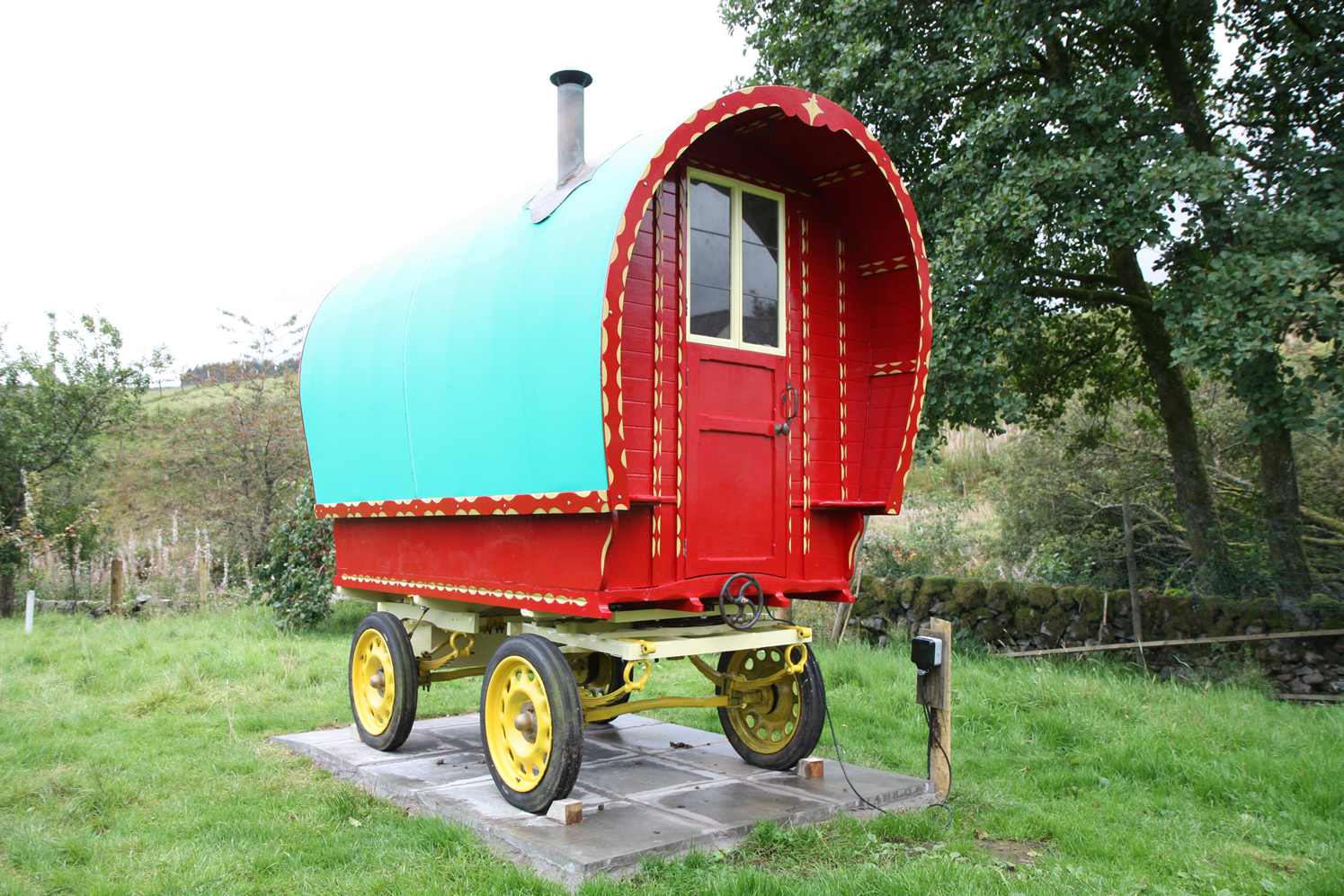 In the summer of 2013 when we moved to Somerset, Nicole was talking about getting a bow top gypsy caravan.  At first, I was planning to build one (no idea how, would have figured it out somehow) but, as chance would have it, I passed one that was for sale at the side of the road.

A quick phone call to Nicole first, then we agreed to buy it.  As we were getting married soon after, some of our kind relatives chipped in to make it into a wedding present.

In the spring of 2017, we moved to Scotland.  The caravan was already showing some signs of wear and tear and I had effected some temporary repairs to some of the paintwork.  Anyway, we had it transported to Scotland (a nightmare is it happened as the first courier, found via Shiply, simply took the caravan and disappeared – Shiply couldn’t have cared less – we had to track it down ourselves and ask a friend in Somerset to go and “nick” it back).  Anyway, I digress, the caravan finally reached Scotland in the summer of 2017.

I don’t know if you remember, but that was quite a wet summer.  Followed buy a wet autumn.  Followed by a harsh winter of rain, sleet and snow.  The caravan was struggling in the elements.  The paint was peeling off in a number of places and the canvas was ripped along the side.  It was also getting a bit damp and mouldy inside.

I had been looking for a large shed in which to put it and work on it, but that was proving tricky.  Then, without warning, we had a heatwave.

We took advantage and got to work.  All the woodwork was sanded back – that took a while, even with power sanders.

Then a coat of exterior primer was added followed by some bright red Dulux weathershield.  As you may have noticed, we also decided on a new colour scheme.

As the painting progressed, Nicole got inside and sorted out the interior.  There were some marks, damage in transit, plus the afore-mentioned mould. All of that was cleaned away leaving it looking sparkly clean.  Nicole has grand plans for the soft furnishings.

Fortunately, the weather held out and excellent progress was made.

All in all, it took 5 or six weeks to get all the painting done.  Weathershield takes quite a long time to dry, even in the sun, so that delayed things a bit.

The undercarriage was also a bit fiddly, a mix of wood and metal.  Fortunately, I managed to get yellow paints for metal and wood that looked pretty similar.

But, finally, all the base paintwork was done and some of the decoration added.

Nicole had sourced some stencils so we could add interesting artwork to the panels, but before we could get that done, the hot summer ended.  So we have put that back till next year.

We also have had new shafts made (as you may have noticed they are missing from the pictures).  The original shafts were broken in transit, mainly because rain had got through the paint and softened the wood underneath.  The new shafts are in the shed awaiting painting.

Finally, I added an electricity supply so we now have a heater in it through the winter.  That should help keep it dry and mould free.  Having read “The Stopping Places” by Damian Le Bas, we were inspired to build a base so as to help keep it dry underneath.  We also bought a made to measure winter cover for it, but a succession of early winter storms soon shredded that and it is awaiting repair.