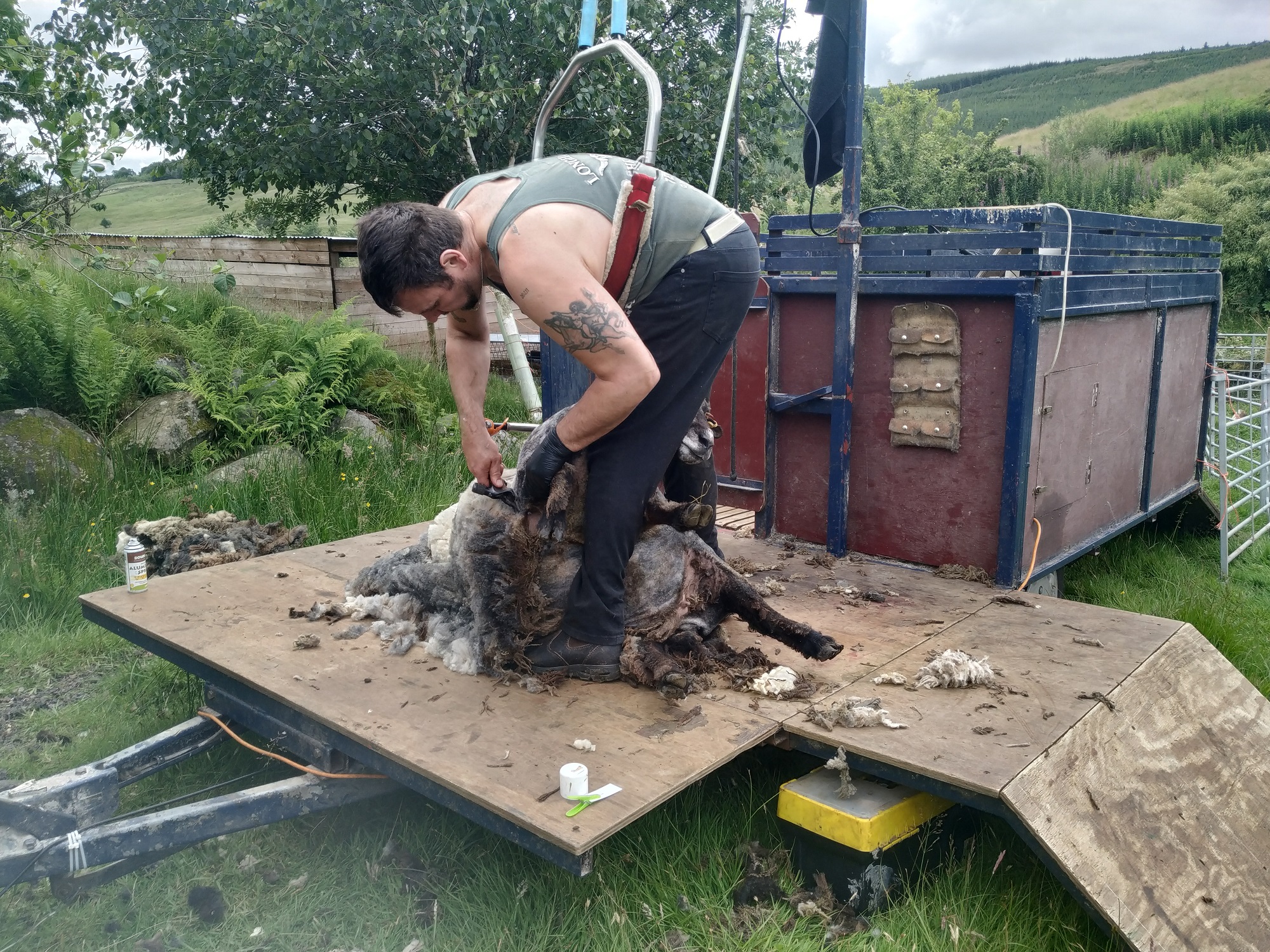 This story is a bit late, I meant to post it last week but everything to do with shearing this year has been delayed so it’s no wonder my little blog story is too!

Each year we have our flock sheared.  Our breed of sheep (Coloured Ryelands), are particularly woolly, they’re a “wool breed” which means they were bred back in the olden days, helped along by the monks of Herefordshire, to produce wool which was then used predominantly for making fine garments.  Ryeland wool was shipped all over Europe and sold for high prices.  Queen Victoria reputedly even had stockings made from Ryeland wool!  It was very sought after and Ryeland sheep were kept very busy.

Sadly, nowadays there is very little demand for wool, least of all Ryeland wool ☹ It is a very sad fact because if you’ve ever stroked a Ryeland sheep you will see why their wool is so special.  First of all, the Ryeland looks like a teddy bear, they are woolly all over, legs, tummies and faces.  Their wool is very dense and springy and as it grows they start to look much tubbier than they actually are.  Here is a picture of Yssi taken in early spring, she could easily be mistaken for a barrel!

So back to shearing, in Scotland shearing traditionally takes place in June, about 6 weeks later than in England.  This is because of the northern climate, the summer takes a bit longer to kick in up here.  Sheep are shorn as soon as summer makes an entrance, it has to be “post frost” for obvious reasons, and also sheep are sheared traditionally on hot, sunny days as the wool needs to be dry before it can come off.  As you can imagine, this can be a tricky to organise when you’re at the mercy of an Atlantic weather system in Bonny Scotland!

This year we contacted our shearer as we’ve always done, in May and he said he’d come in June and let us know the date nearer the time.  So we carried on with life.  May turned out to be one of the hottest on record and Adrian and I were tempted to bring shearing forward, but lambing still goes on in May and we didn’t want to disrupt Jim’s schedule.  Shepherds have a packed calendar, particularly in the spring with lambing and shearing happening in close succession.

Now, we check on our sheep twice a day, but decided to step it up to three times in the run up to “the big still to be confirmed shearing day”.  Hot weather brings out the flies, and mucky, woolly bottoms plus flies equals a potentially fatal condition; fly strike.  Every few days we took some of the flock into a pen and dagged their bottoms.  All the spring grass was having an effect, especially on the younger ones whose digestive systems were still “firming up” so there was plenty of dagging!  We also ran our eyes over the flock and checked for any odd behaviour which might indicate a maggot problem.  Even despite the dagging, maggots can be crafty and hide in nooks and crannies.  A sheep who’s been “struck” by the blowfly will behave oddly, they will jump at their own shadows and try and run away from themselves.  Sometimes their behaviour change is more subtle so you need to use your intuition as well.   As we were soon to find out.

We also needed to check for any sheep getting stuck on their backs unable to right themselves, all that wool is very heavy after a year’s growth, and sometimes a sheep can roll over and get stuck like a beetle, unable to get up with the weight of their fleece, which can get even heavier if it gets wet.  This happened to Yarr quite recently, click here to read about his pickle:  So these checks were really important for the sheep’s welfare, and also for Adrian and I to be able to sleep at night, otherwise we’d worry non-stop.

May came and went and we were starting to feel run ragged, we’d added another job to our sheep tasks; mucking out the shelter.  The sheep had taken to camping out in their “summer house” pretty much for most of the day.  They really love their shelter, it provides shade and somewhere to get away from the flies, however on the flip side, it can get mucky very quickly.  Unlike pigs, sheep do their business wherever they happen to be, so you could be going round with the pooper scooper and they’d be filling it up as fast as you’d be emptying it!  We’d then sprinkle lemon scented wood shavings down which is great because the lemon scent keeps the flies away, and the shavings provide a lovely soft carpet for the sheep to relax on.

We got into the first week of June and by now texts were going back and forth between myself and Jim to get a shearing date in the diary.  We would be done in between his bigger flocks, much like a small building job is fitted in around bigger building jobs.   By now we’d already found Yarr stuck on his back, and two cases of flystrike.  First Yssi, then Yogi.  One morning I’d gone to muck out the shelter and do my checks when I noticed Yssi sitting a bit strangely, she was sitting up, almost like a dog, her bottom on the ground with her front legs straight out in front of her.  I watched her get up and follow the rest of the flock out while I mucked out and she seemed fine but I thought I’d bring her into the pen anyway.  I straddled her backwards and parted the wool on her backside, my heart sank, there were at least 3 or 4 clusters of tiny wriggling maggots, deep in her wool.  I phoned Adrian who was in the kitchen making breakie, and asked him to bring shears, cotton wool and cider vinegar diluted in water.  We don’t routinely spray our flock so had no chemicals to hand.  I intended to pick the maggots out and clean her up with the vinegar solution.  I would also shave her backside to give the maggots nowhere to hide.

Yssi was a trouper, she let us do all this to her and we pretty much got rid of all the maggots.  Just to be sure though we whizzed over and got some flystrike solution from the local agricultural store and gave her bottom another once over.  While we were doing this, we noticed Yogi stamping her feet and looking a bit wild eyed.  Oh oh, we both said, lucky we had our vet kit to hand, we brought Yogi in, lifted her tail, and sure enough there was a tiny patch of maggots there, wriggling around.  They were clustered around a “problem area” on her bottom.  A few weeks back I’d found a little patch of infected skin under some damp wool.  I’d shaved it clean and her bottom had healed, however those blowflies had obviously found a tiny bit of skin which was still broken and decided to lay her eggs there.  Great place for a fly, not so great for poor old Yogi!!

We upped our bottom patrol and started mucking out the shelter twice a day, morning and evening.  The weather was still unbearably hot but now it was wet as well with summer storms and heavy downpours.  Jim had intended to come twice but had to cancel due to the rain.  Then he cancelled again because he slashed his arm open and had to be rushed to hospital to get stitched up.  It’s a dangerous job shearing, especially when you’re tired from running from farm to farm between storm showers trying to fit everyone in.

At the end of June there was a week’s reprieve a dry spell once more and we had another date from Jim.  At the allotted time of 5pm we brought the sheep down to the orchard near the house where there’s a power supply and another shelter for them to wait in until Jim arrived.  We were ready and waiting.  We waited, and waited, and waited.

At 7.30pm we could wait no more, I climbed a hill and texted Jim, I didn’t want to hassle him, but the sheep had been penned up a long time and needed to get out.  We needed to know what time he would be coming.  A reply came back, “sorry, two of the team have heat stroke, can’t come this evening”.  Our hopes crashed, we were so upset, we felt sorry for Jim as he was having a hard time, but our flock desperately needed shearing, it was becoming a welfare issue.  Their thick coats needed to come off, we couldn’t wait any longer!

At this point I hear you ask, why don’t you shear them yourselves?  Well, that is a good question, and the answer is, we learnt to shear when we first got sheep, and we sheared our first flock (albeit only 3!)  It took us a long time and the sheep came out looking rather oddly shaped!  The trouble is, you need to put in lots of mileage to get good, and you need to be good to be able to shear, you can’t be “just OK”.  If you’re not good, you can badly injure your sheep, or stress the animal by holding it in position for too long, they can die of stress quite easily.  To cut a long story short, we don’t have enough sheep to practise on and just doing it once a year isn’t enough to get good at shearing.  So having done the course and sheared our lot once, we made the decision to call in the experts.

The next day we sent out an SOS on twitter and rang everyone we knew who had sheep and got numbers of other shearers.  We couldn’t afford to wait any longer, and much as we understood that we’d be done eventually, we didn’t want to wait any more.  We also felt it would be better to have a small flock shearer, we love the way Jim shears, I called him Mr No Nicks, he’s a great shearer, but he’s a big flock boy, and we realised we needed someone who specialised in small flocks that could prioritise us and not fit us in around other bigger farms.

After some frantic phone calls, one or two had the same problem as Jim, they were working through backlogs due to the wet weather so couldn’t help us, we then somehow we ended up with three shearers!! Just like busses!

We settled on one recommended by smallholders in a village not far away and at long last, a new date was set, and this time, nothing went wrong, PHEW!!!

The new shearer, Guy, did a brilliant job along with his partner Dee who helped me collect the fleeces and allocate name tags to them to be later made into rugs and cushions.

We have already booked Guy for next year, we are so happy we found him and I think our flock are pretty happy too 😊