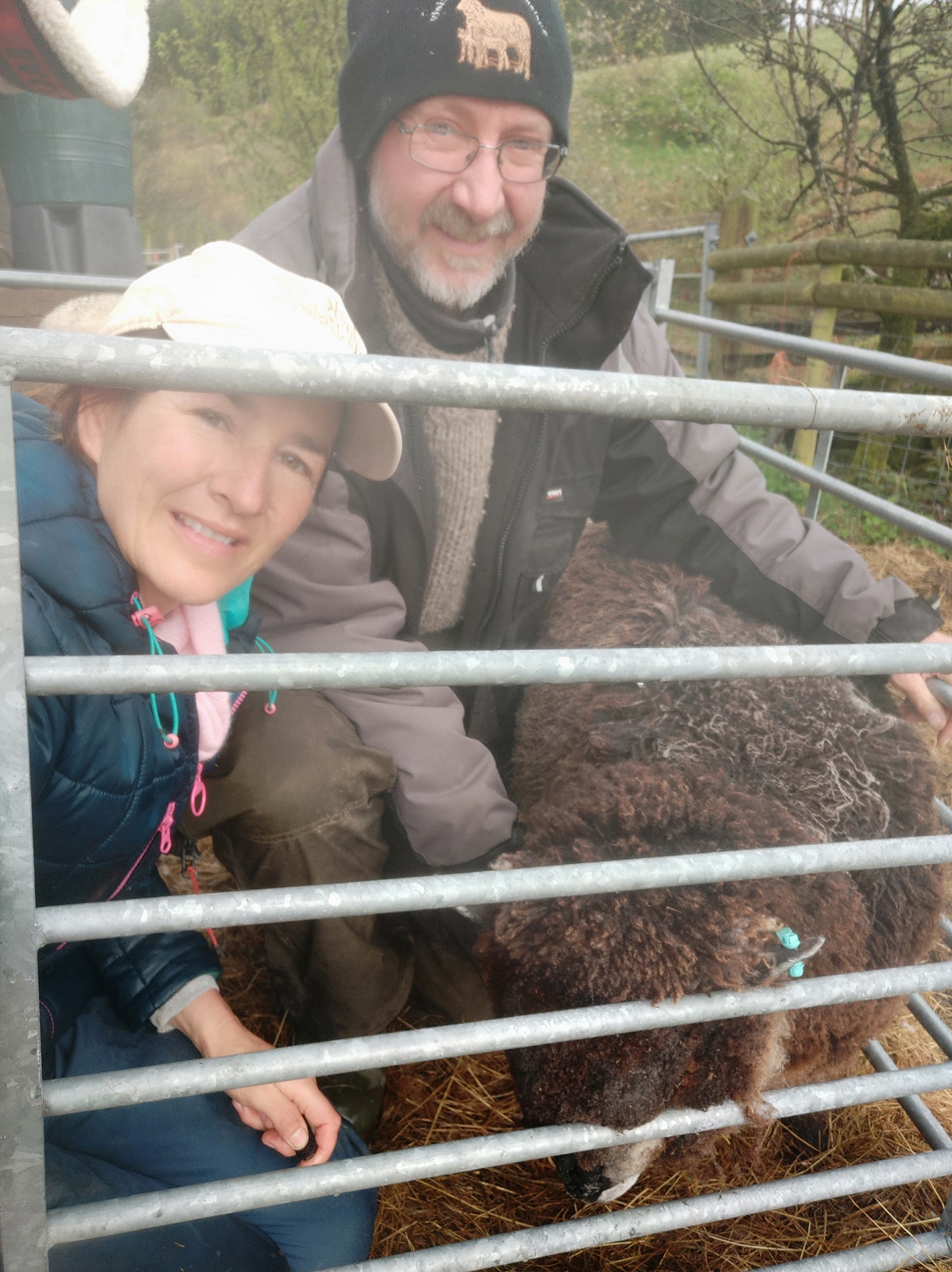 A few years ago Adrian and I were a normal couple who had summer holidays and long weekends off, lazy Sundays and spontaneous trips away.

And then we got sheep…

To be honest, we were a little naïve when we acquired our mini flock back in 2014.  We wanted to keep the grass down and I fancied doing something with wool.

Little did we know just how much those three innocent looking teddy bears were about to change our lives.

Our first inkling came when we went to the Mole Valley Agricultural store in Bridgewater (in Somerset where we used to live) to buy some sheep equipment.  I remember that day well, we were really excited and had a long, carefully researched shopping list containing interesting sounding farmy things like drench guns, hoof shears, hurdles and hay feeders.

After ordering the hurdles, feeders and troughs from the outside bit, we went into the shop to get the rest.  We popped hoof shears, a hoof pick, dagging shears, halters, bucket licks and nuts into our trolley.  Then we went round to the medicines aisle where we confidently selected a bottle of antiseptic spray.

On our shopping list I’d also written “wormer”, “fluke meds” and “fly spray”.  But we weren’t sure which type or brand to buy.  There was so much choice!  It felt very much like the washing powder aisle in Tesco’s which is somewhere I’d prefer to avoid if at all possible.

So off I went to find someone and to my relief I located the store Sheep Expert.  He told us he had sheep himself and was only too happy to help us.  He sat us down in a little office where there was a small round table, some chairs, and a life sized model of a sheep.  He told us all about parasites; but mainly he told us about flies.  He told us flies were the number one concern to sheep farmers and that we would need a fly spray to prevent and to deal with the dreaded Blow Fly.  He demonstrated how to spray a sheep correctly using a demo drench gun on his model sheep.

We asked him how flies can kill sheep and soon wished we hadn’t as he went into very graphic detail.  He explained that if a sheep is struck by a Blow Fly, she has only days to live.  We asked him how to tell if a sheep has been struck, at which point he said, “you have to look for The Signs”.  We asked him what these Signs were and he said the main one was the “head turn” where the sheep looks back over her shoulder.  “Wild eyes” was another one, “bottom rubbing” and “foot stamping” were other signs, and then finally “any behaviour which is out of character”.

It was at this moment, as we heaved a bottle of Crovect into our trolley we felt the first creeping tendril of Sheep Angst taking hold.  What if we didn’t spot one of The Signs? What if we didn’t apply the spray correctly?  Actually, how did we even catch our sheep in order to apply the spray?  (We’d only had our sheep a few days and were rubbish at rounding them up).

As we drove home, our excitement of a few hours earlier had pretty much disappeared along with a vast amount of money and we were both lost in our own thoughts as we rattled back along the lanes towing our trailer full of shiny new things.

Fast forward a few years and here we are, not exactly old hands and not exactly wiser – but definitely older and more experienced than those early days of sheep keeping.

Unfortunately, we discovered that the “sheep angst” that took hold of us both in the Farmers Store all those years ago doesn’t go away the longer you keep sheep, but you do find ways of managing it.

The first thing you do is get to know your flock.  By observing your sheep you start to learn how they behave and you get familiar with their individual characters.  It takes time, but it’s worth it because watching sheep is in itself is actually a lovely activity.  There’s nothing quite like lying on your back in the field surrounded by your flock, listening to them cudding in your ear and nibbling your wellies.

The other thing you do is check up on your flock regularly.  We check up on ours twice a day, more often if we’re lambing.

We’re very religious about our checks because nowadays we don’t use fly spray.  We like to be able to handle our sheep without fear of chemicals transferring onto us.  We’ve found that our scrupulous checks and regular bottom trims have paid off, in the few cases of fly strike we’ve had (two cases in four years) we have managed to deal with it very swiftly.

Apart from checking for The Signs, the checks tell you all sorts of other things, you’re mainly scanning the flock to see if anyone’s behaving out of character, you’re counting them to make sure they’re all there, and you’re making sure they’re not in pickles (lame, head stuck in fence, on back with legs in air, stuck in a hedge etc) …

The other thing that happens is, you stop going away as much.  Holidays have to be meticulously planned, you book a farm-sitter and you still worry even if your farm-sitter is brilliant as our is.  Bye go the lazy Sunday morning lie-ins, and bye go the spontaneous trips away.

On the plus side though, you gain lots of woolly friends and by being around sheep you find yourself learning unexpected things such as the art of patience and how to be calm.  You can’t be impatient or in a bad mood with sheep, they sense it and scarper.  You have to be able to compose yourself.  This is really good training for being a better human.  It sounds cliché but sheep have so much to teach us.

We’ve also found an easier way to do all those routine things which sheep need regularly such as “crutching out” (bottom trimming), face trims and hoof trimming.  We used to bring them in every three months and work through the whole flock.  This would take us hours and we’d be fit for nothing afterwards.  So this year we decided to bring in three sheep a week and rotate through the flock doing three a week on a continual basis.  We thought it would be easier on our backs, and also better for the sheep as they’d have their bottoms and faces trimmed more often and we could catch any hoof problems faster.  All in all, so far at least, we’ve found this to be a good system for us.

The other change we’ve made this year is to purchase a “backeze” sling by Longhorn.  You can see me using it in the photo.  It’s just brilliant!  It gives support to your back exactly where you need it but is also springy so you can adjust position easily.  It’s made those weekly bottom trims much easier, happy us, happy sheep!