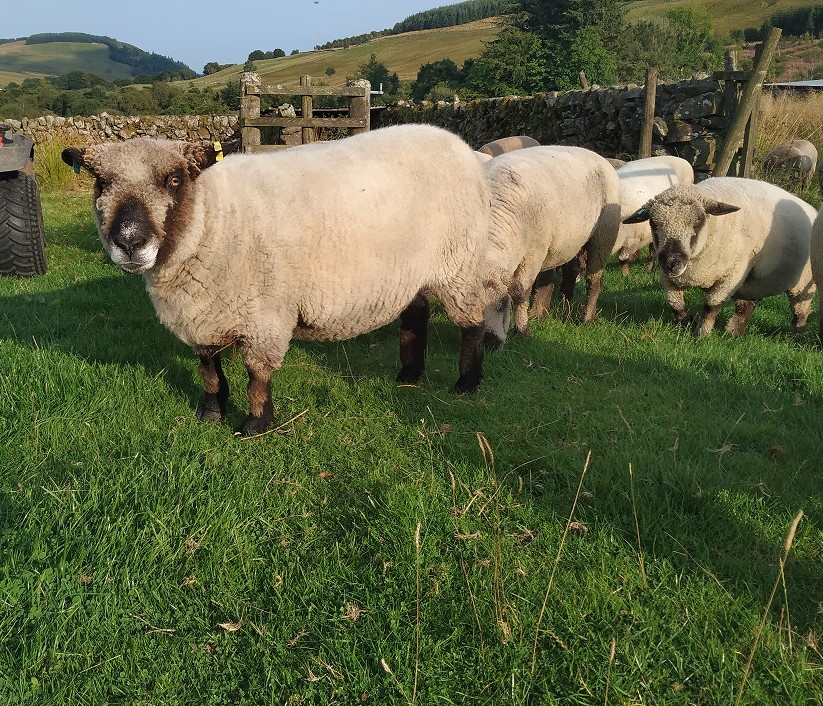 This summer has been long, hot and dry (most unusual for Scotland!)  This has been great, mostly, who doesn’t love the sunshine?  It lifts the spirits and the long evenings we have up here can be appreciated at their very best.  On a sunny day, it can stay light and bright until 10pm at night!

But as always, when you live so closely connected to the land and keep livestock, the weather plays an important part.  A long, hot summer, while being great for the spirits and for saving on housework, (no mud = less hoovering) the dry weather can also bring problems; namely, water (lack of), and flies (flystrike).

Our water supply which is a spring up on the hill ran dry in June so we’ve been topping it up from the burn.  It’s not ideal, but we can manage, we pump it up every morning from the river and are careful with our usage.  We know that soon enough, autumn will swish in with an attitude and we’ll be getting our wellies out again, the spring will fill up and we’ll wonder what all the fuss was about.

Flies also love warm weather.  The Scottish speciality – the midge, particularly so.  But while midges are annoying, coming out to party in huge swathes at dawn and dusk, getting in your eyes, your ears, your mouth and having you running back indoors to look for your “midgie net”, apart from being irritating, they are pretty harmless.

The other local hoodlum, the “cleg” is similarly irritating and seems impervious to attempts to swat it away.  If a cleg manages to bite you, (which it generally will!) you’ll know about it, but again, clegs are nothing to lose sleep over as long as you have a tube of bite cream handy.

It is the blowfly (aka the greenbottle) which gets the prize for being a level 10 pain in the backside (at least for anyone who keeps sheep!)

The blowfly is attracted to any animal which it deems suitable for laying its eggs on but is particularly partial to sheep.  It seeks out living flesh which has a hint of dampness and dung about it and unfortunately a sheep’s backside is an easy target.  In the spring, before shearing gets underway, sheep are at their woolliest.  Woolly bottoms, combined with the after-effects of grazing on lush spring grass gives the blowfly the perfect place on which to lay her eggs.

Once the eggs hatch, maggots start to emerge and feast on what is at hand, (without going into too much detail, it’s pretty gruesome), they start feeding on their host.  If left unchecked, this causes severe distress to the animal, and eventually, death.

Because of the severity of problems caused by the blowfly, most shepherds and farmers protect their flocks with “pour on” insecticide.  We don’t here on our smallholding because we have a small flock, not that many blowflies (it’s generally too breezy and fresh up here for them to be a problem), and we don’t like using chemicals.

It’s a tricky one though, because you have to weigh up the options, what is worse: reaching for the chemicals, or putting your sheep at risk of being eaten alive by maggots?

We follow the non-chemical way, which is very time consuming, we basically check our flock continually.  During the blowfly season which runs starts in April and tails off towards the end of summer, we go up to the hill three times a day and scan our sheep.  What we are looking for are “The Signs”.

What are these mysterious signs?  Well, if a sheep has been “struck”, it will start to act just ever so slightly differently.  At first the signs are really subtle, but if you know your animals, you’ll get a sense for even the smallest change in behaviour.

We’d brought our flock into the barn for their three monthly hoof trims and general MOT’s.

The summer MOT doesn’t usually include a “bottom check” (bikini line and tail trim), because the flock have only just been sheared.

However, Yssi has a particularly fluffy fleece so she gets a bottom check and trim every three months just to be on the safe side.

So, I straddled her and trimmed away her wool.  I noticed a small area of skin under some dungy wool which I’d trimmed which needed some anti-bac spray.  Sometimes damp wool near the bottom area can cause small infections on the skin as the air never gets to circulate and it’s always a bit damp around there.  So I duly sprayed her and we let her out of the pen.

As she trotted out to join the others, Adrian noticed her stamping her hind hoof and looking somewhat perturbed.  We watched her for a moment and came to the conclusion the anti-bac spray was causing her to feel temporarily itchy.

We finished the rest of the MOT’s and before letting them out to the wider pastures we decided to bring Yssi into the pen again just to make sure we hadn’t missed anything.  After another check we couldn’t see anything untoward, so we opened the gate and off they all trotted up the hill.

Three days later, I was mooching about among the flock with George, scratching Vi on her favourite tickle spot on her hoof, and idly looking around at the other sheep when I noticed Yssi stamping her hind leg again.

Now, a sheep stamping its leg is nothing strange, they frequently do this, (especially the hind legs) during the summer when there are lots of flies about.  What caught my attention was the fact that the other sheep weren’t stamping.  The other thing I thought odd was that Yssi was swishing her tail and again, none of the others were.  They were peacefully grazing.  And while Yssi was also grazing, she just didn’t seem to be as peaceful as the others.

I continued to observe her, aware that it’s easy to start adding up two and two and coming up with five.  After a few minutes I noticed her sitting down (again, nothing unusual), but what struck me was that she wasn’t chewing the cud.  She was just sitting there.  As I watched her some more I thought her eyes looked sad.

At this point I decided to bring her in and give her a really thorough inspection.  So I got some sheep nuts out of my pocket, led her into a wee pen nearby and called Adrian who was back at the house.

I wanted Adrian there so he could hold her while I had a really good look at her, all over.  I thought, from her foot stamping that something could be irritating her tummy area.

With Adrian standing at Yssi’s head to prevent her from walking off, I straddled her rear end and worked methodically, parting the wool little by little, making my way down from her tail to her hind legs.  As I got to her hind leg “armpit”, I noticed something small and white wriggling away from me.  Bingo!! I said, followed by some descriptive words.  As I parted more wool, I found three colonies of maggots, Yssi was going to need a thorough clean up.

Leaving Adrian with the patient I went back to the house for my trusty bottle of “Battles Maggot Oil”, scissors, and a big wodge of cotton wool.

Once back, I got to work on Yssi, I first trimmed away her wool so that I could see where the maggots were, then, pressing cotton wool soaked in maggot oil into the affected areas I dabbed away.  Once I’d treated the main areas and the maggots had dropped off.  I snipped away more wool from the surrounding areas and dabbed more maggot oil pretty much all over her backside and down the inside of each of her legs.

As I snipped and dabbed, we both felt Yssi start to relax, almost as if she was enjoying the experience.  As she undoubtedly was, we were removing a huge source of irritation for her!  Adrian was at her head, stopping her from moving forward.  Afterwards, he said he wasn’t even holding her, she was just happy to let me get on with what I was doing.  Probably thinking, “took you long enough humans” 😉.  Afterwards we watched Yssi trot off happily to join her friends and we went back to the house for a nice cup of tea.