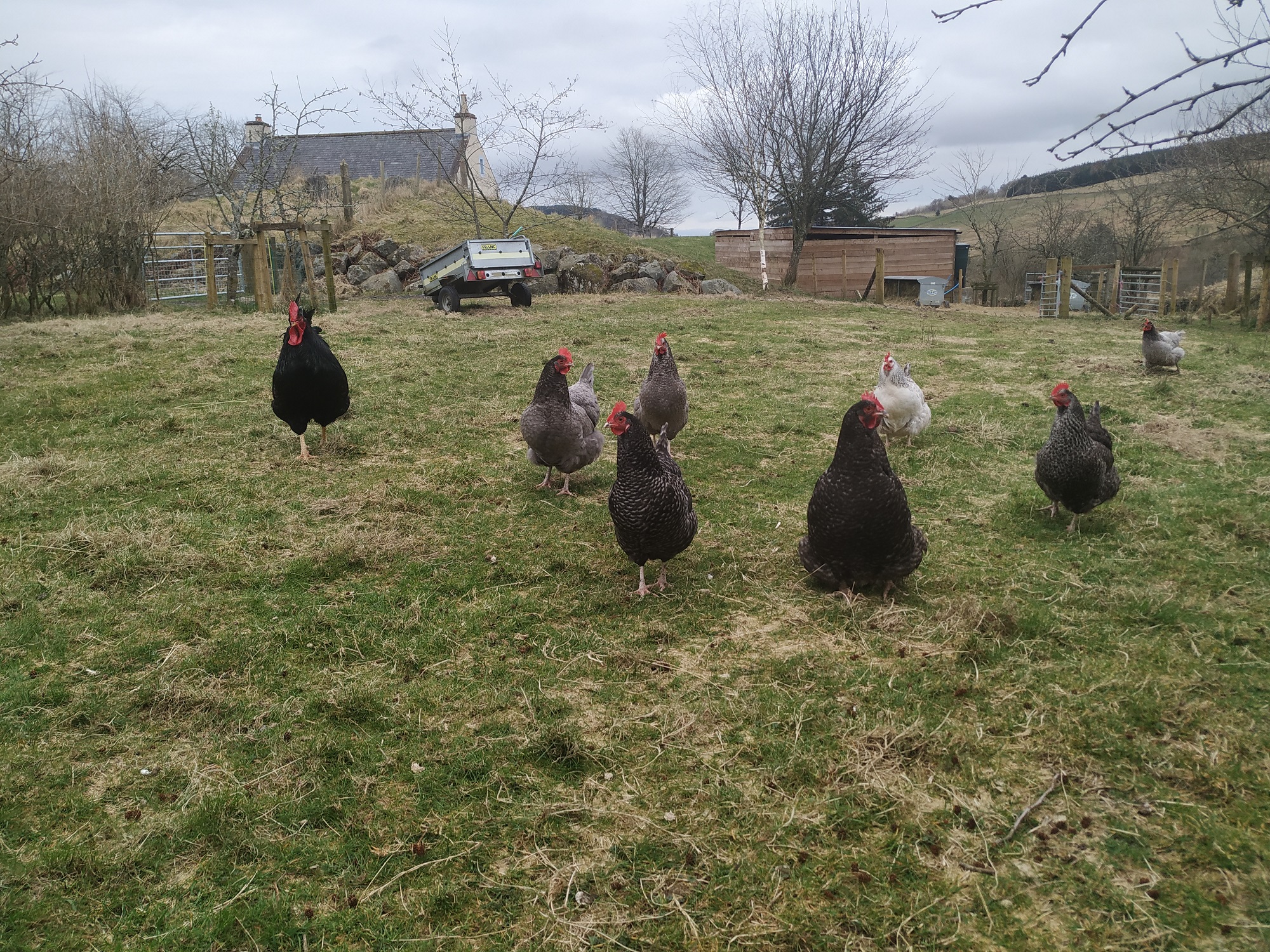 With spring fully underway, though the weather doesn’t feel like it, we are on the lookout for broody hens. Each year, one or two of our hens decides it’s time to sit on eggs. Each has their own particular approach.

Clippy likes to disappear, much like her mother did. All of a sudden, she’ll just go off the radar and we’ll be wondering where she is. We’re never quite sure and worry that some predator has taken her. Then a few days later, we’ll catch a glimpse of her sneaking towards the food dispensers, often giving the other hens a wide berth. Putting our private detective hats on, we try to follow her back without being seen. Not easy in an open field with the tiny apple trees providing the only cover. Last year, she built a nest in a newly planted woodland area, under a bramble and right up against the fence to one of the neighbouring properties. We managed to locate it and had a quick look while she was off on one of her excursions and saw thirteen eggs (again, just like her mother).

The weeks went by. Nothing. Now hens’ eggs should hatch in around 24 days, so something was wrong. In fact, not a single egg hatched but it was months before Clippy gave up. It took her a long time to rebuild her condition.

Pepper, on the other hand, decided to go broody in the Green Frog henhouse. We have three henhouses, Green Frog, Solway and Omlet so our hens have plenty of choice. Normal night time spot is Green Frog (or the bushes behind it). The favourite laying spot is one of the two nest boxes in Green Frog. That said, sometimes they switch and lately the eggs have been laid in Solway (4 available boxes). Omlet (just the one nest box) has been out of favour for a while.

So, back to Pepper. Last year she decided to go broody and make her nest in Green Frog. On the plus side, we could easily monitor her. On the down side, constant interruption. Hens do like a bit of peace and quiet when they’re sitting on eggs. However, the other hens took umbrage at being locked out of their favourite nest box and made quite a racket at laying time. Well, more than usual. In fact, they managed to dislodge Pepper more than once as we found her in the left box one, day the right box the next day, then back to the left one, and so on.

We moved her and her eggs to Solway thinking that would give her some security. But as soon as Solway opened the following dawn, she was back into Green Frog. We moved her eggs back but the nest box hopping continued. As with Clippy, none hatched. The whole experience took such a toll on Pepper that she lost a lot of weight and feathers. She was in a very poor state and we started giving her extra feed to help her recover. Predators are all always on the lookout for weak or distressed animals and a local stoat took his opportunity and snatched her. Luckily, it was witnessed by Nicole who was out in flash, in her slippers, and rescued Pepper. She made a full recovery, Pepper that is.

So, the question arose; why so many eggs and no hatchlings? Our attention turned to Cherokee. Now, Cherokee has blossomed since he moved in with us a few years back. He came from a house nearby where he’d survived a dog attack in which all his hens had died. He had subsequently been left to his own devices. We offered to take him and, over time, he’s gone from shy and tetchy to become Mr Cool as Mince. The problem is, he’s so cool he can’t really be bothered to catch the hens. He gets a sudden urge and lopes across the grass to the nearest hen, full of intent. She hears him coming, takes one look and makes herself scarce. Cherokee arrives where said hen was moments before, stops and looks around in a puzzled demeanour. Sometimes he catches them, but more often than not he gives up and goes off to find something to eat. His predecessor was far more persistent. Or, perhaps, Cherokee is just firing blanks.

We scratched our heads and came up with a possible solution.

Saturday past, Mrs Mills Junior (MMJ) went broody and settled down in Green Frog. We gave her a couple of days to make sure it wasn’t a false alarm and then moved her to Omlet. We had set Omlet up with its own private run which is predator proof. MMJ, surprisingly, had not laid any eggs, so we got the latest one, laid earlier in Solway, and put it in her new nest. Of course, MMJ was not too impressed and scurried around her new run squawking irritably, perhaps trying to find her way back to Green Frog. We gave her time to settle and next day, she was sitting on her single egg. Broodiness had trumped indignance.

Knowing this one egg may not be fertile, not wanting her to sit there all summer and wanting some new chicks, we sourced some fertile eggs from Backyard Chickens near Dalbeattie. Today, we zipped down there and collected them. We drove back with Nicole clutching the carefully packed eggs to protect them from the myriad of potholes that are a feature of roads in Dumfries and Galloway.

Getting back, we carefully opened Omlet and reached in to pick up MMJ so we could put the eggs in place. MMJ was having none of it and shot off into her run squawking as if a giant fox was right behind her. Quietly, we placed the eight eggs in her nest and retreated. Minutes later, she was back on her nest making contented noises.

Hopefully in 24 day’s time, we’ll be reporting on squeaks and baby chickens.