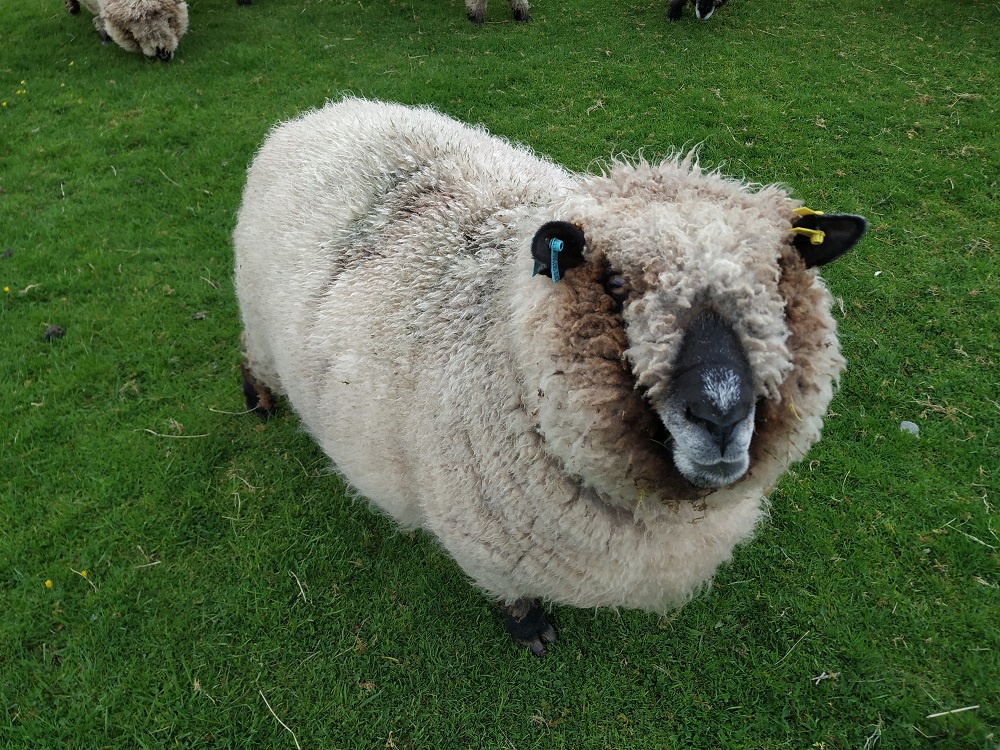 If there’s one thing sheep are good at, aside from scoffing copious amounts of grass, it’s getting into pickles. These include activities such as getting your head stuck in a fence (more common in the younger members of the flock), going into panic when you realise the rest of the flock have wandered off and left you behind, getting wrapped up in brambles, getting over walls and fences into neighbouring fields, and so on. Also, the tups are quite adept at removing gates from hinges in order to meet the ladies.

Some pickles are related to the time of year and, right now, wet fleeces are problem number one. This is not because a wet fleece is, in itself,  cause for concern. If it were, then sheep would never survive the winter. The problem is that at this time of year, pre shearing, the fleeces are big, fluffy and crammed with wool. When they get wet, they get heavy. Again, this is all fine until… …the sheep decides it’s time to do a rolly polly.

Rolly pollies usually occur when a sheep is lying down, cudding or just generally relaxing, and decides to get up. Instead of just standing, it executes a clever roll straight onto its feet. This works well and is quite impressive –  until the weight of a heavy fleece stops the roll in its tracks. Once on its back and weighed down by said wet fleece, a sheep can become trapped. The proper term is ‘cast’. This is not a good position for any of us, but it’s particularly uncomfortable for a sheep as now, all its insides are pressing in the wrong places. Not to put too fine a point on it, if they are not found within a few hours, they can die.

Our rolly polly commander in chief is Yarr (pictured left). He has a particularly woolly fleece and a penchant for rolly pollies. He much prefers to roll out of a lying position as standing up would not be showy enough. Normally, he gets away with it as he’s pretty strong. But a quick downpour and a wet fleece and he can be in trouble.

So far, this year, he’s only got himself trapped the once and was found pretty quickly. We know this because he showed no signs of distress on being righted, other than a need to blow his nose. In previous years, on being rescued, he has been sometimes been quite shaky. He also displays a remarkable aptitude for looking for the rest of the flock in all the wrong places. In fact, it took me an hour to reunite him and, at one point, involved me running up a hill (to the gate) with a bucket of nuts just in front of his nose. We both had to stop to catch our breath at the top, panting for all we were worth.

For us, this means regular checks throughout the day, usually no more than two hours apart. This is paying off as, so far this year, aside from Yarr only Ynca has managed to get herself cast and she too was found in good time.

We’ll be shearing them soon and that will make the problem go away for another year. But the checks will continue as we move into flystrike and midgie season.