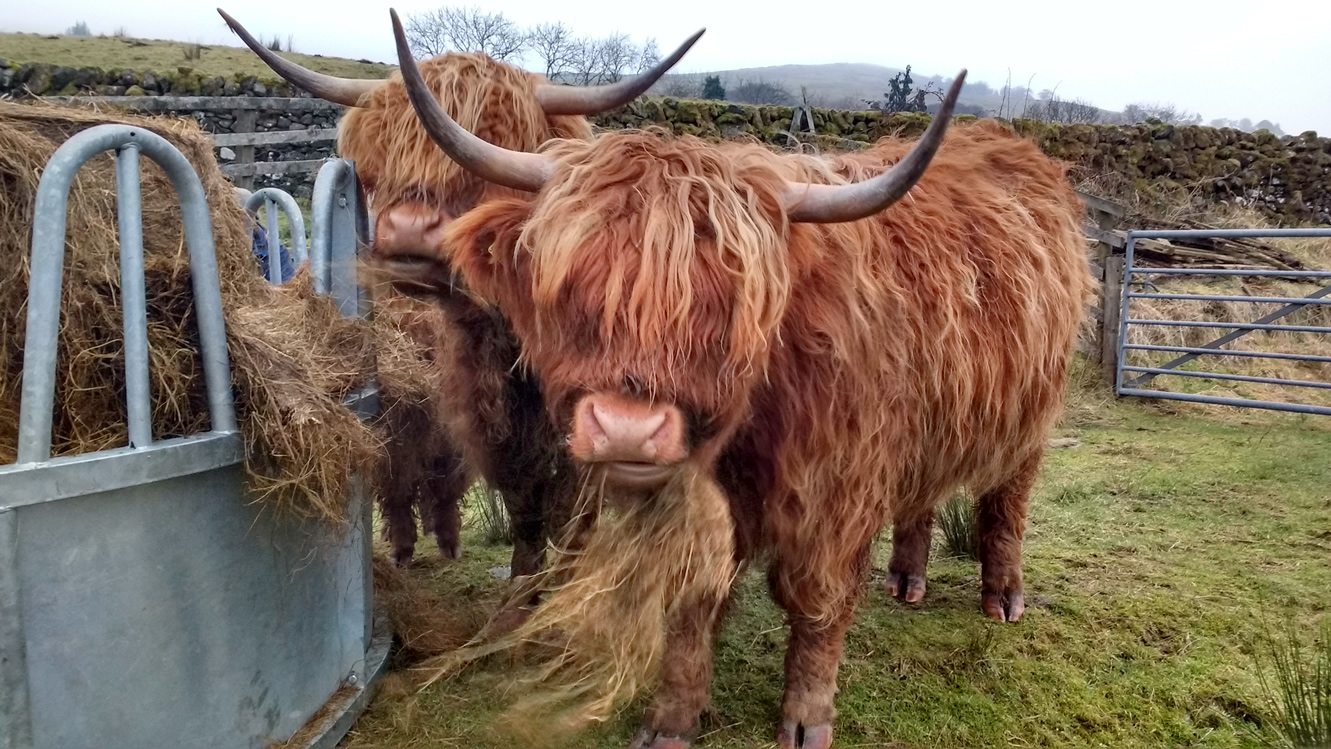 Following on from our Sunday morning “board” meeting and our decisions on where to site our cow management area, today we moved to phase 2.  This was made possible by the speedy delivery of a haylage spike for the tractor that I had ordered on Saturday.  Our original plan had been to roll these bales of haylage to where they are needed.  Ha – ha!  They weigh nearly 500Kg.

I had picked up two bales of haylage on Saturday and they were parked on the ground.  I assembled the spike and fitted it to the tractor.  A practice run moving a bale of straw (a big round one, not a small one) went well.  So, I moved onto the haylage.  My first attempt failed, I hadn’t lined the spike up very well and the tractor couldn’t lift it.  I tried again, got it right and off I went with the large bale down to the cow field.

I put the bale down on an area of track so the cows would have hard standing when they eat.  Much better than standing in six inches of mud.  I took the tractor back and then, with Nicole being back from work, we had lunch.

After lunch, Nicole and I went down to make it all ready.  We stripped the plastic and netting off the bale and tried to tip it onto it’s base.  It seemed so easy on This Farming Life on the TV.  We had a go and, having managed to move it at least 2 inches, we stopped to ponder and then I headed off to get the tractor.  That made life much easier and with a gentle nudge from the front loader, the bale was in place in no time.

Next, we rolled the feeder down the hill, over bumpy frozen ground and icy sheets.  At least it was downhill!

And now it was time for the best bit – we went off to get the cows.  They had, of course, migrated to the top of the field, as far away as possible.  They do like it up there.  Nevertheless, armed with samples of haylage, we soon had their attention and they started to follow us down.  Now, Bluebell and Ivor are calm as you like.  But Texa gets very excited and does an excellent impression of a charging, bucking bronco.  She usually skids to halt beside us looking slightly surprised and also gazing intently at any food we might be carrying.  I dropped a little haylage which kept her happy and we kept going.  After that was eaten, Texa bucked and charged again causing  Nicole to drop all her bundle of haylage.  Texa doesn’t mean to hurt us, she’s just excited and happy, but when you are standing on an icy hill watching her careering towards you, you do worry she might misjudge slightly!

Anyway, we soon had Texa down at the feeding station.  Of course, Bluebell and Ivor had found some tasty grass so off I went to fetch them.  I persuaded Bluebell to follow me without too much trouble.  She loves haylage.  Then, we heard a plaintive “moo” from behind the wall.  Ivor had stayed behind and was wondering where everyone had gone.  Nicole went off and fetched him.

As for the haylage, the cows love it.  The best part is that Nicole will no longer have to lump a bale of hay across the field every morning.  Plus, we should have enough hay left for the sheep now for the rest of winter.  This huge bale should last the cows a week or so.  And of course, they won’t go hungry – they have as much food as they need, on demand.