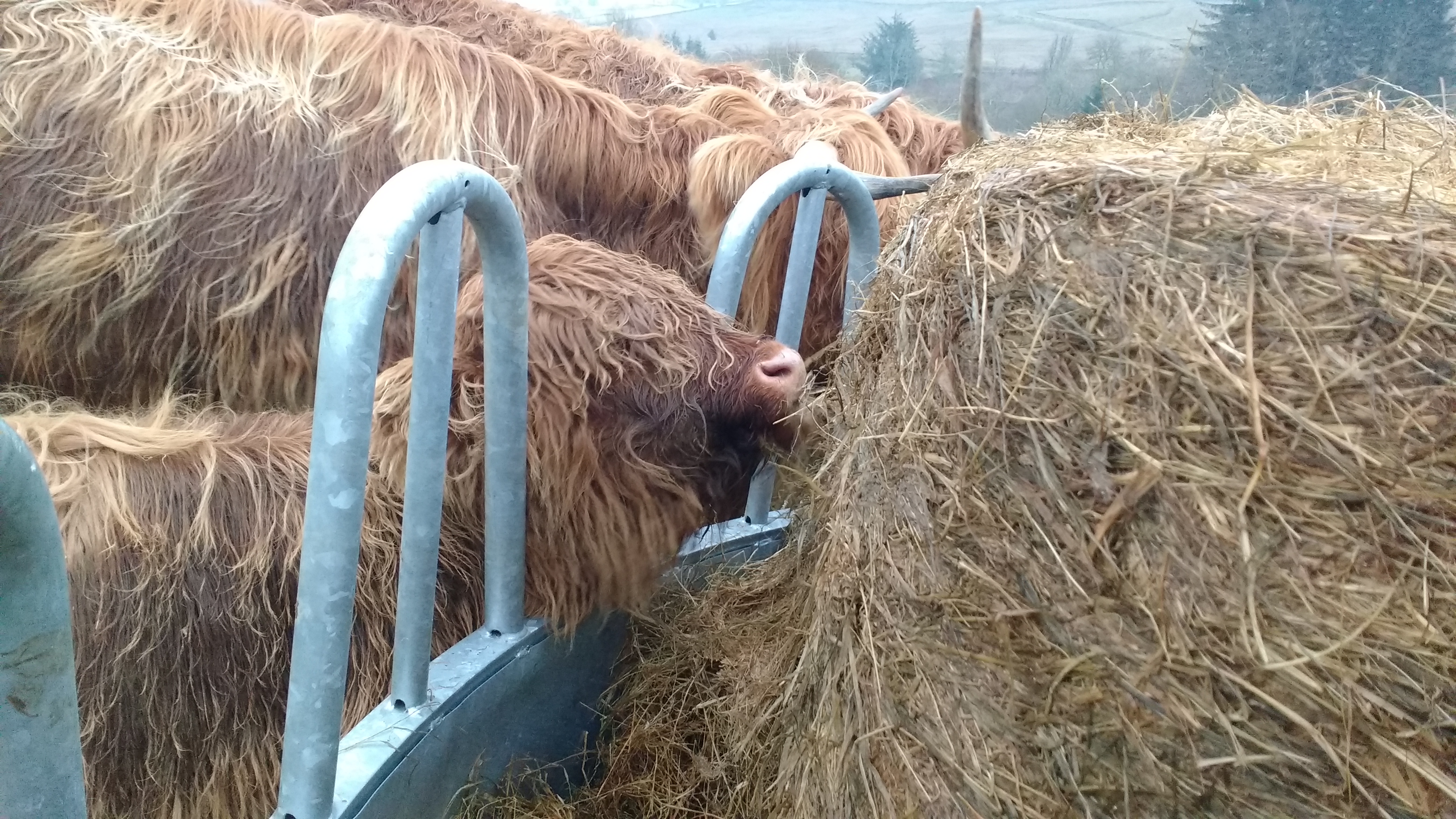 Writing a blog is so much easier when life is rosy and there are good things to report.  Sadly at the end of January our wee highland calf Ivor passed away.  Then a few short weeks later a badger got into our hen coop and helped himself.  It’s at times like these that the “good life” doesn’t seem so good and putting pen to paper to write about this side of “the good life” is hard.  Words become a struggle and do not flow as easily, all the sadness which we do our best to process and work through comes flooding back as we recall each painful memory.

However to quote the farming cliche, “where there is livestock there is deadstock” , life goes on, so I thought I would be brave and put pen to paper and update you on recent events.

As you probably know from previous stories it’s been an unusually cold winter, snow has lain on the ground on and off since November, as soon as a brief thaw occurred, this was followed by yet another load of white stuff.

January 18th was no exception, it had snowed through the night and at 7.30am as I trudged through it feeling like the Michelin man in my 30 layers, slipping and sliding over the uneaven ground covered in ice and snow and compacted mud, I headed over the hill, first to the sheep, to fill up their hay feeders, count them, make sure none had slipped over unable to get up again, smashed the ice in their water troughs and gave the lambs ear rubs.  I then climbed over the gate into the cow field (too muddy and snowy to open gates these days!) to do much the same.  But that day as I walked down the slope towards the big round feeder which the cows have been glued to all winter, I saw a small rust coloured heap on the ground next to it.  My first thought was “Ivor”!!  But as I continued down the slope, I told myself to be sensible, I always think the worst, it’s not a good habit of mine this worrying,  it must be a pile of haylage.  But as I drew nearer my worst fear was confirmed, it was little Ivor, lying on the ground, cold and dead.

I would like to say what happened next was a blur, but the truth is I remember everything vividly and the memory of finding Ivor lying in a heap and the next few hours has etched itself firmly in my mind, coming back to haunt me whenever it  pleases.

Adrian came, the vet came, our neighbours came, Ivor was still a little bit alive it transpired, the vet tried to get a temperature reading but he was so cold that no temperature registered, she tried to find a vein to give him life saving fluids but they had collapsed, I remember Ivor giving a faint moo and Bluebell, his mum, replying, our hearts were full of hope as well as despair.  We were united in our efforts yet broken inside.  At 10am Ivor passed away, in our kitchen by the aga.

Words cannot describe the sadness we felt and huge sense of loss.  The rest of the day felt like a dream, a different reality.  We couldn’t process what had happened and were barely able to function.  If it hadn’t been for our other animals needing our attention we probably wouldn’t have functioned, at all.  The “what ifs” hung over us like dark shadows, could we have done something to prevent this?  Had we missed something?  Why did he die?  Highlands don’t get hypothermia!  Where had we done wrong?  We just couldn’t work it out.  We checked up on our cows twice a day and spent time combing them and talking to them, we knew they were eating, they were motoring through their feed, and Ivor had been scoffing haylage happily.  I was with them for most of the day before, ironically building an area to pen them up should we ever need the vet.

We had long conversations with farmers, I ordered a truck load more books on cow husbandary and tortured myself googling calf ailments.  We didn’t sleep for all the questions hanging over us and the choking sadness clutching at our hearts.  Eventually  though we started to piece things together.  Ivor had been born late in the year to a young mother.  This meant he had entered winter a bit younger than is ideal.  Bluebell wasn’t fully grown herself and didn’t have the ample milk supplies a fully mature cow would have had so when the weather turned unusually cold Ivor was at a disadvantage already.  Added to this, as the temperatures plummeted, at five months old he was at that critical stage between coming off milk and moving onto forage so his rumen wouldn’t have been working at full capacity yet, and it’s the action of the rumen which keeps cows warm.  It’s like a built in central heating system.  So it seems, like many of these things, it was a series of small things which in themeselves seem not too significant, but combined, can be lethal.

Despite these explanations making perfect sense during daylight hours, I still cannot shake off a sense of guilt and regret which haunts me at 4am.  The fact is, we are ultimately responsible for our animals, the buck stops with us, we are the reason for them being alive, and we are responsible for their deaths.  Maybe in time we will harden up, but I don’t think we’re the “hardening up” sort of people.  We might become more philosophical perhaps, but when animals in our care die, whether it is planned or unplanned it never comes without a huge sense of responsibility and ultimately forces us to question the big things, life and death and our role in the lives of our animals.