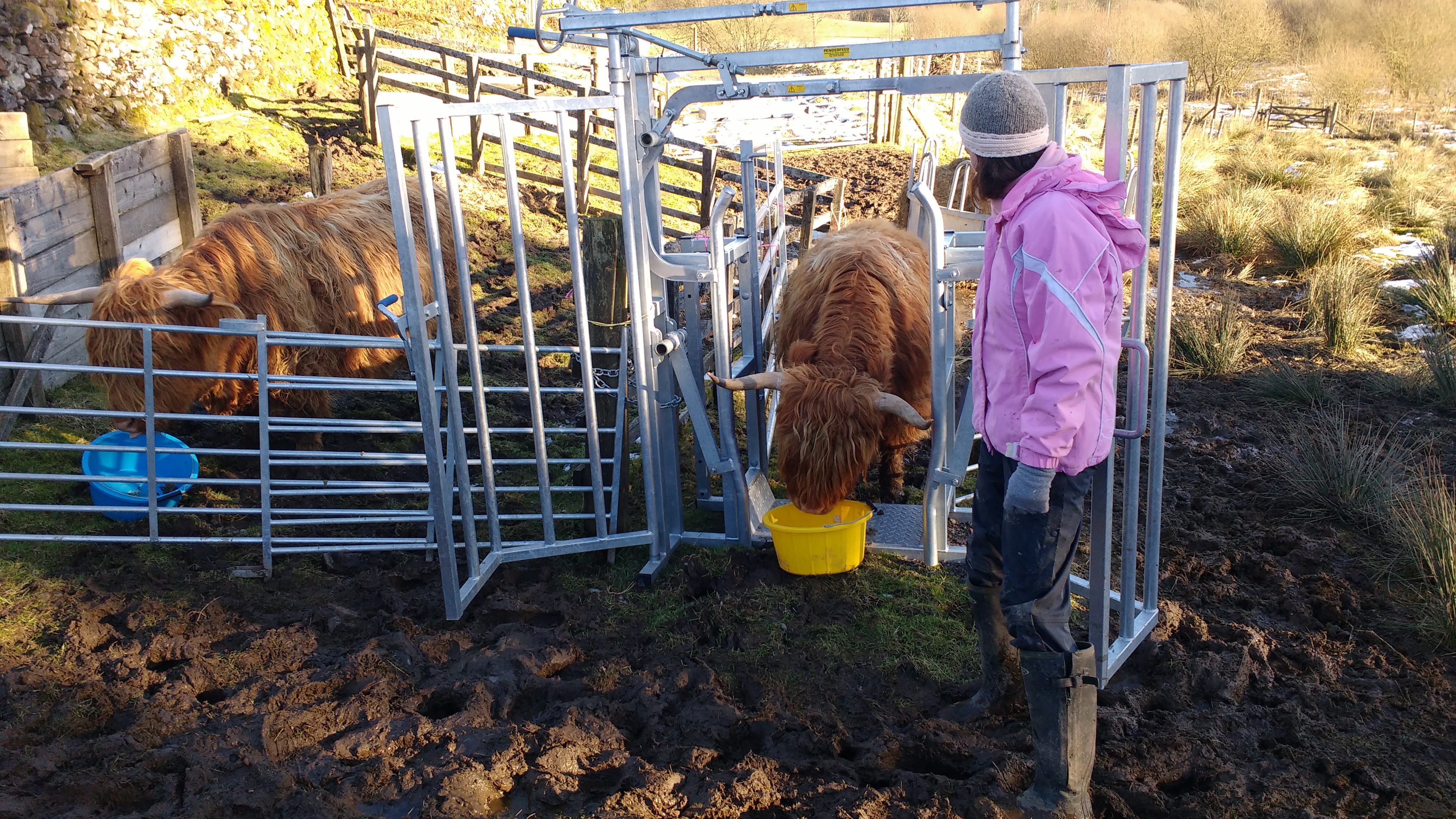 After losing wee Ivor we noticed the dynamics between Bluebell & Texa had shifted slightly, they were skittish and seemed uneasy, they hung around the gate where we had carried Ivor away, and spent a lot of time looking into the distance.  It was heart breaking and we were sure they were pining for him as we were.  However it is easy to put a human spin on things and transfer our own feelings onto animals.  Yes, they must have wondered where Ivor had gone, yes there was undoubtedly a reshuffling of the pecking order, but they were also getting on with the business of scoffing haylage and generally doing what cows do.  Animals tend to live in the moment, unlike us humans, so we tried to remain positive and not be upset or emotional when around them .  As their  “pack leaders” for want of a better word, we had to be calm and strong in their presence and carry on with our day to day care, “business as usual”.  This was easier said than done, and I admit, we found it hard to follow our own advice.  In fact we failed spectacularly in the days following  Ivor’s death,  truth be told, both of us completely lost our confidence.  It’s difficult to explain, but at one very low point, we even considered selling Bluebell and Texa, so convinced were we that we weren’t cut out for it.  We still somehow blamed ourselves and didn’t feel we could give them what they needed.  Thankfully this low point only lasted two days, by Monday we had a plan, we would continue to keep cows, we would continue to do our best to care for them, and we would continue to yoke and crush train them as we’d planned to do a few weeks beforehand.

To do this we would need to take things up a level.  We already had a good rapport with them and we were gaining their trust, they allowed us to comb them (everywhere bar their faces).  We were at a good stage to take the training a step further.  We thought we would use the approach we’d used with our sheep a few years ago.  At this point I should say that there is a serious reason for gaining an animal’s trust, it’s not just for our benefit to be able to pat and stroke them, it’s best for the animal too should they need medical attention. There is nothing more frustrating than trying to round up a sheep for example and then restrain it, all to give it a three second injection.  The whole atmosphere becomes fraught and it is pleasant for neither party.  Our sheep were relatively easy to “train”, (being new to sheep at the time, we were very pleased with our efforts!)  we halter trained them over the winter during our first year of keeping them and now they trot around after us like friendly dogs.  We wanted to adopt the same approach with the cows, but at the same time we were aware that one thing is penning up a sheep, but it is entirely a different matter penning up a huge animal like a cow.  There has to be more psychology involved, particularly with Highlands who are not only big, but have very long horns too!  One thing we noticed when we first got them, was that we had to be careful when using cow nuts as rewards because they get very excited and a few times we’ve had to step away quickly to avoid them careering into us in their eagerness to get a mouthful of the cow equivalent of sweeties.

The reason we wanted to train them to use the yoke and crush was because at some point we knew we’d have to put them in there if they needed injections etc. I have to admit, I had another motive as well; the frustrated hair dresser in me was desperate to comb out their fringes which have got very straggly over the winter.  We also saw the crush training as an opportunity to feed up Bluebell who was still slim after her pregnancy.  So, with this in mind, we came up with a strategy. We’d put some nuts in separate buckets, one for each cow.  Bluebell got a full ration, Texa got a sprinkling.  We’d hide the buckets behind a wall before entering the field to avoid the excited scrum.  We’d then put the girls in position, one would go into a pen, and the other would be positioned by the crush.  Once in place and the atmosphere was calm, each got their bucket.  As they were in separate areas there would be no fighting over buckets.  The cow we were crush training got her bucket in the crush so she started to see the crush and yoke as something positive.  Each day we would alternate so both cows got either penned up or led through the crush.  We hoped that it would take no more than two weeks, and I am pleased to report, that we managed it!  Admittedly the first time we put Bluebell through the crush she somehow ended up coming through back to front, not sure how that happened.   But they seemed to enjoy the “game” and as the days went by we noticed they started waiting in anticipation, either in the pen, or by the crush, clever girls!