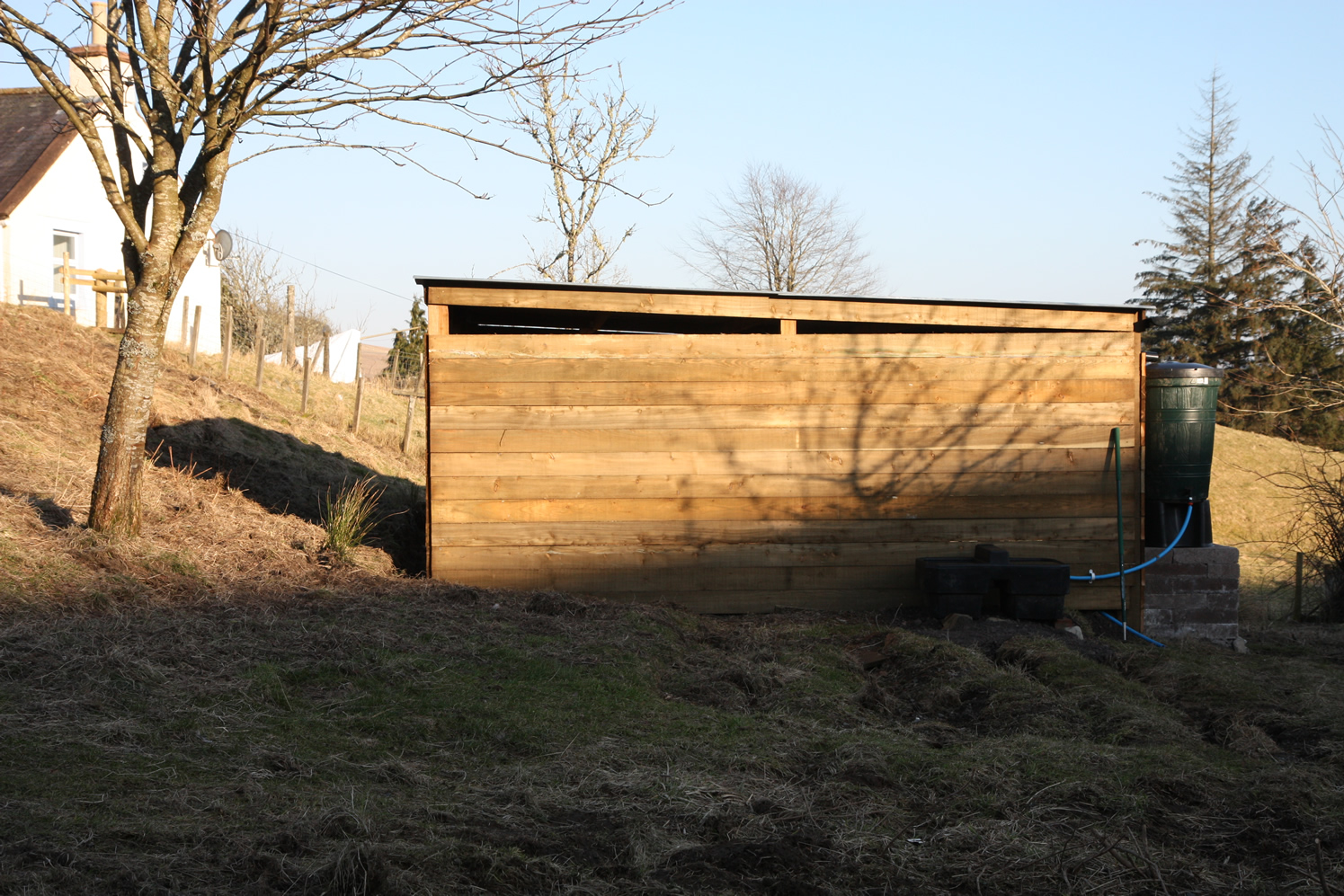 When we moved here to Auchenstroan, we thought there was not much to do.  It seemed like all the fencing was in place and that it was all set up for sheep.  Well, a year later, we cannot believe how busy we have been.  We haven’t helped ourselves by leaping into taking on new animals, namely pigs and cows.  But on top of that, there was no water system for the fields, no decent lambing facilities, no pig facilities and no cow facilities.  What there was, was lots of brambles.  Lots!

On top of that, it seems to have been raining since last July.  Either that or snowing.  To be honest, we are both a bit tired of trudging through the mud delivering feed to our various flock.  The mud does its best to suck of your boots off.  The snow made it hard getting up and down the hills.  That said, on the plus side it’s hilly here so it does dry quickly.  If it would stop raining, or snowing.

It has not been an easy start to the year.  Nicole has described our losses, Ivor and the badger attack on the chickens.  This time last week I was up to my knees (because I was kneeling) in mud constructing an anti badger electric fence.  It was a yet another cold, damp day.

This incessant bad weather hasn’t stopped us.  For example, we have been improving the inter-connectivity of our fields.  This is mainly to keep the cows out of the sheep shelters – they are too big and would probably flatten them.  So, two weekends ago we were out in the snow putting a gateway into a dry stone dyke.  It was a good, if tiring, weekend are we really pleased with the results.

And at last, the weather has changed – we have had a week of sunshine.  A dry week.  It has been freezing cold, but that’s fine, just having the sun shine has really lifted our spirits.

Also, getting to the bottom of why the aga never got very hot has been brilliant.  When we dug up the concrete floor to in the utility room, we found the oil pipe buried and with a huge dent in it.  Given the aga oil flow runs on gravity, that was a very useful find and has now been repaired.

Today, the sun has shone brightly and we have managed to give all the sheep their annual booster.  This was despite the cows coming rushing through their new gate and over to see what we were up to.  We had the sheep treatment pen next to the fence resulting in two big faces with horns attached leaning over the fence trying to get to the sheep nuts.  We had to put move them out and shut the gate – they were not impressed. And an unimpressed highland cow can be quite scary, hats off to Nicole for leading them away while I attached the gate.  We made it up to them later by giving them a fresh bale of haylage.

Best of all, the lambing paddock is starting to look great.  The shed is built, the fencing all done and Nicole has removed all the old chicken wire fencing and all the brambles.  No mean feet.  The electrician is coming this week to add power and next weekend we’ll put the lambing pens together.

I even got a moment to sit on a rock and take in some February sun.  Lovely.

Soon it will be spring – we can’t wait.