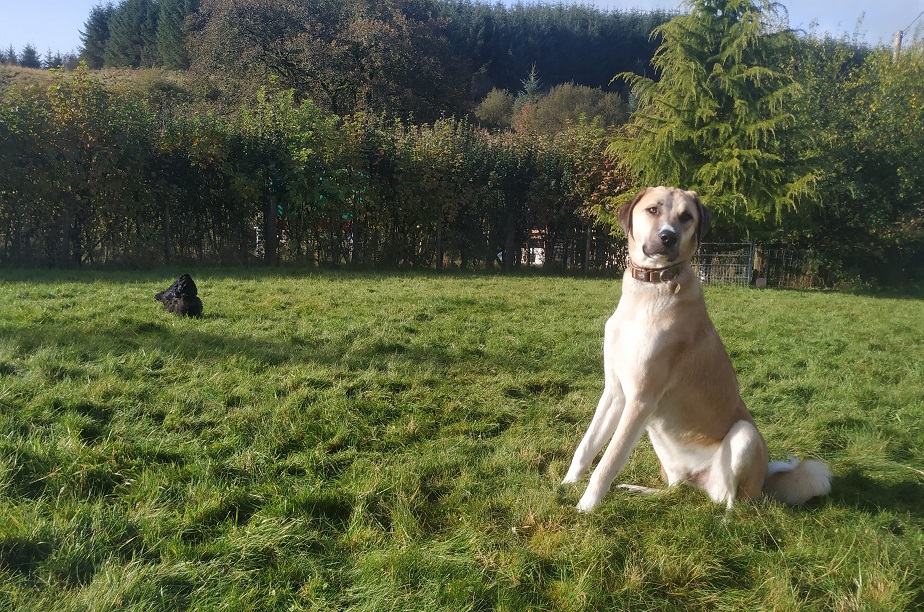 After three months of slowly introducing Elliot to the hens, yesterday was a big day for our Anatolian rescue dog from Turkey.  Elliot was ready to be let off lead amongst the hens!

We took lots of time with the “hen training” because Elliot didn’t get off to a good start with our feathered friends.  He had Clippy in her mouth during his first week here so both the hens and Elliot had to re-learn how to be with each other.  Elliot showed a little too much of the wrong kind of interest in the hens and the hens were nervous and panicky when he was around.  Not handled correctly, the training could go badly wrong.  We knew it would take time but by the same token we were hopeful it would be possible.  The truth was, we didn’t have much choice as with winter approaching we would soon have our hands full with feeding the sheep their daily hay.  The hay feeders are situated in the orchard where the hens are and we wouldn’t be able to have Elliot on his lead whilst sorting out the hay.  There’s too much to do so Elliot would need to be ready to roam free with the flock by the end of October.

The training itself was quite tedious, you can read more about it here.  This said, the hens loved it because they got extra corn.  Most of the time George (our other dog) was visibly bored by our daily trips to the orchard.  He made a point of sitting by the gate so he could make a swift exit when the training was over.  Happily, despite his reluctance to get involved, his presence still had an effect and Elliot learned to relax more and “just be” with the hens with each passing day.  Animals learn best from each other and so far George has been a good teacher to him (even if some of his lessons are not necessarily to our benefit, ie, on hearing the recall command, decide in your own time whether it’s worth going back or not) …

Although Elliot can now be around the hens off lead, we will continue to keep a close eye on him over the next few weeks.  If anything were to trigger either the hens, the sheep or the dogs into an excited state, (ie a cat appearing out of nowhere), then we’d need to make sure he would be able to handle this and not get caught up in the high energy.

We will see how he goes over the next few weeks but so far so good, well done Elliot!