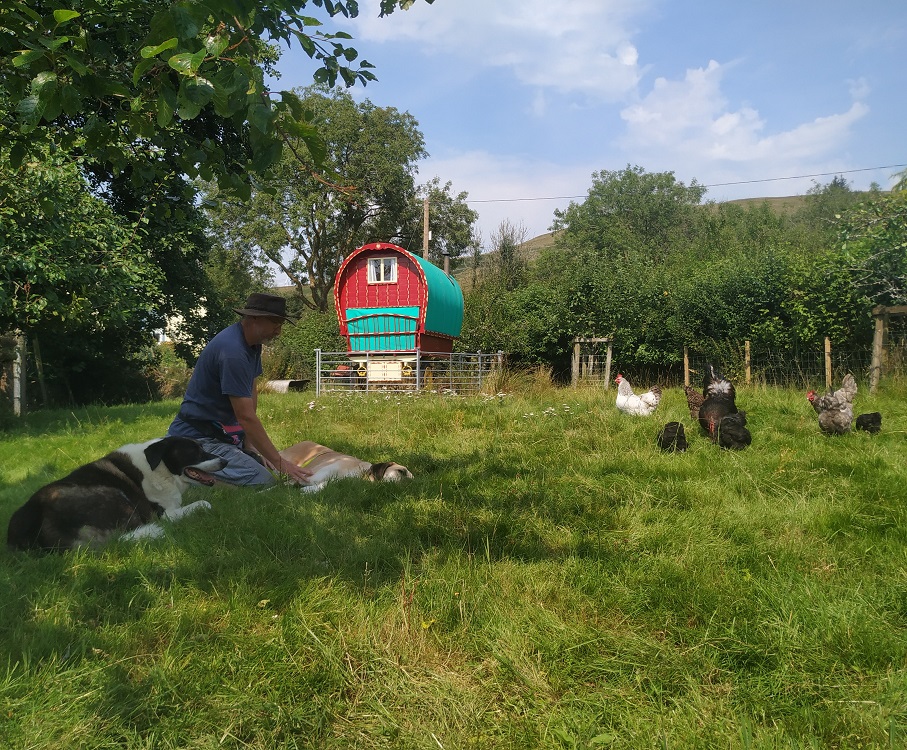 Now that the sheep have accepted Elliot and he can join us off-lead in amongst them, we have turned our attention to teaching him how to be around our hens.  The hens wander around freely in the orchard and up until now Elliot’s not been allowed into the orchard because of this.  The orchard is the hens’ domain but we’d like to be able to extend Elliot’s freedom and allow him into the orchard too, so it’s important he learns how to behave around the hens.  As with the sheep training, George (our other rescue Anatolian) will be the main teacher, we’ll just be there to guide him.

So, a couple of weeks ago or so, we began “Operation Hen Training”.  The training itself is simple but has to be repeated every day and preferably with Elliot in a relaxed mood.  With this in mind we thought a good time to do it would be directly after his mid-morning walk.

The idea is we take Elliot into the orchard, lie him down in the “relax” position and then bring the hens in, not too close, but not too far.  Both the hens and Elliot will need to be aware of each other’s presence but not be spooked by it.

We repeat this for a few minutes every day and bit by bit we bring the hens in a little closer.  Eventually we’d like to have the hens running all around Elliot and both hens and Elliot calm in each other’s presence.

A small side note, we’ve had to approach the hen training cautiously because during Elliot’s first weeks with us, Clippy (top hen), accidentally found herself in Elliot’s play paddock.  We were throwing a ball for Elliot and he was running after it when out of the blue, Clippy popped out from under a hedge.  Elliot thought a hen much more fun than a tennis ball and ran after her at full pelt and Clippy ended up between his jaws.  Fortunately we managed to dive in and rescue her and the story ended well.

However, Clippy remained wary of Elliot and whenever she spotted him walking past she sounded the alarm (very loud squawking).

We’ve not forgotten the incident and nor has Clippy or Elliot, but we’re hoping that with the right approach we can still go ahead and get Elliot to the point where he behaves respectfully around the hens.

So for the last two weeks or so we’ve been going into the orchard every day along with George.  Adrian puts Elliot into his relaxed position and watches his body language and where he looks.  I scatter corn nearby and the hens come in and peck away at the corn, all the while with Elliot lying just a few meters away.

On the first day we did this, Clippy was very cautious and stayed much further away than the other hens.  When we got up to go, the sight of Elliot standing up was too much for her and she squawked for all she was worth.

On the second day Clippy decided Elliot was less of threat and the call of the corn was too strong.  She followed the other hens in, and although she kept her distance, she didn’t sound the alarm and everything remained calm.

The chicks are the bravest, they come in quite close albeit under the watchful eye of their mum.  The chicks haven’t learnt about danger yet so we’re keeping our eye on them too.  There is a lot at stake so we’re taking the hen training slowly and carefully.

We’ve been repeating this daily and each day we’ve been able to bring the hens in a tiny bit closer.

It’s slower progress than the sheep training, but we’re confident we’ll get there.  So far Elliot has been calm and not shown the wrong kind of interest in the hens.  And the hens have been learning that Elliot isn’t a threat.

We’ll write another blog post with a progress update soon.