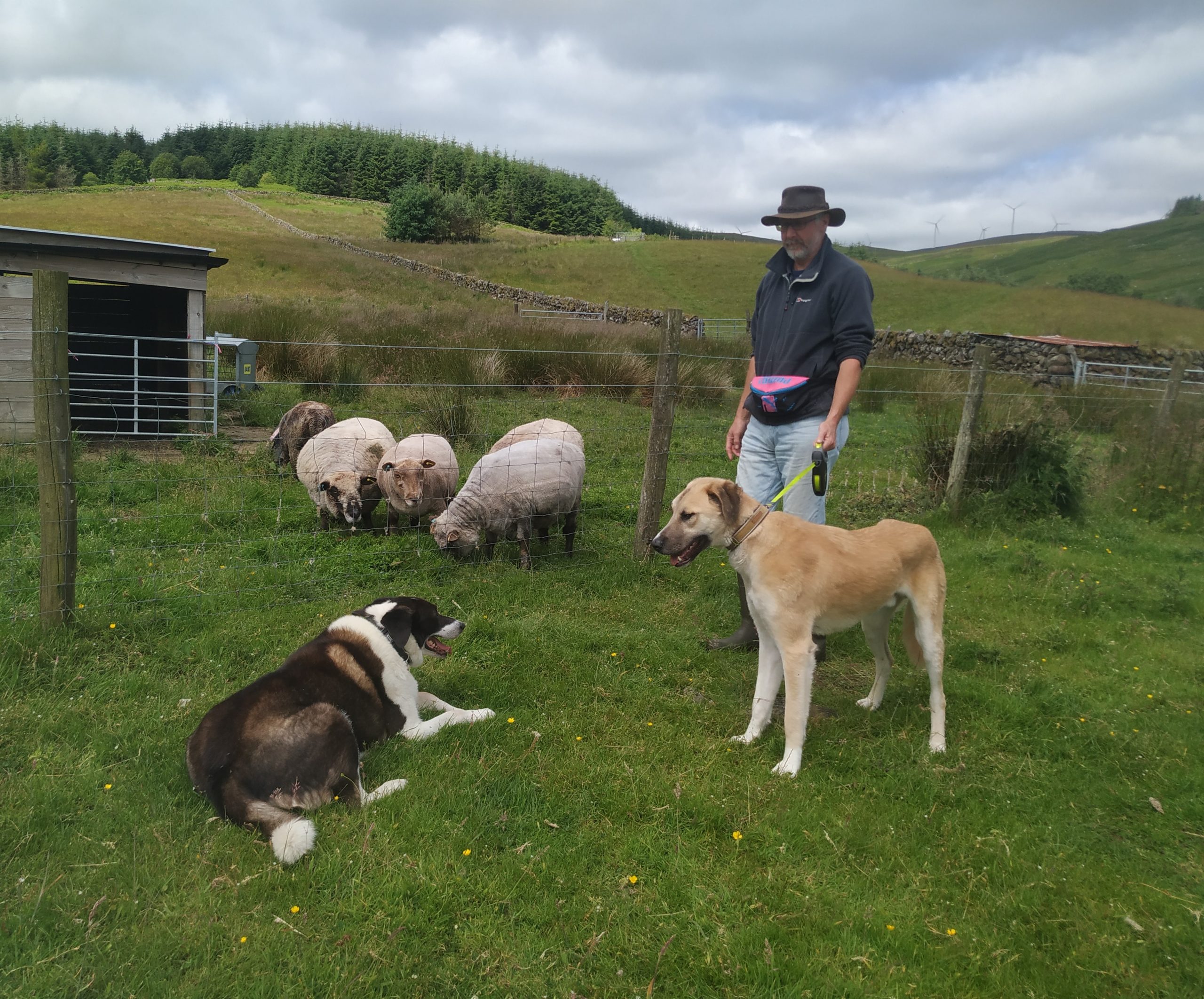 We’ve had our new dog Elliot for just over a month now.  Being a rescue dog and coming from Turkey, up until now we’ve focussed mainly on settling him into his new environment and getting him used to his new “pack”, (us and of course George our resident dog).

Elliot’s young life has seen many changes, first he was rescued from the streets where he faced an uncertain future, then he lived in a rescue centre for a while, then a foster home, and then eventually he moved from Turkey to Scotland where he came to live with us.  At only a year old he has experienced a lot of upheaval so we knew it would be important to take things slowly and help him to feel secure in his new environment.  His training would therefore be approached in a very slow and gentle manner.

Furthermore, although to us humans his past was wobbly and his new home is, from our perspective, all he could ever wish for, this lovely new home wouldn’t necessarily be that great from Elliot’s point of view, at least not at first.  To Elliot, it’s “yet another change”, more sights and smells to get used to and another pack to get to know.  It would all be quite stressful for him to adjust and this would more than likely take a few months.  We know from taking on new livestock that animals never truly settle until about the six month mark.  They might give the appearance of being settled sooner than this, but there are little things about the body language and a look in the eye that lets us know they’re still finding their feet.

So with this in mind we were aware that during Elliot’s adjustment period we’d need to approach his training taking little baby steps.

By the same token, we knew it would be important to start Elliot’s training pretty much from day one.  Being an Anatolian cross, he’s a big, powerful dog with bags of energy and a huge willingness to learn.  We knew he’d need mental stimulation as well as regular walks, so during week one we started to work on his recall.

Anatolians are bred to be independent dogs so doing a speedy recall isn’t their best subject.  They prefer to make their own minds up about things.  Asking them to “come” is the equivalent of sending them an e-mail.  They get the message but they ponder it for a while and then decide in their own time whether it’s worth wandering over.

True to form, Elliot’s first recalls fell on “deaf” ears.  We always practiced it on a long lead so we could guide him in and reward him.  For the first two weeks we had to guide him in all the time.  Then, one day he started to get it.  He now comes over to us and rarely has to be guided, sometimes he bounds over which is very heart warming.  We have a lot of land here on the smallholding so in anticipation of him needing to be reached from further afield we’ve now replaced the vocal command with a whistle.  He’s responding well to this and seems to prefer the whistle to our voices.

As he’s enjoying learning so much, we’ve introduced “sit”, “down” and “relax” to his repertoire.  The “relax” position is really important, it is where Elliot lies on his side.  We included this in anticipation of introducing Elliot to our livestock.  We’d need him to be in the “relax” position when we take him in with the sheep and hens so that his energy would be right and he wouldn’t look threatening.

So, with his basic training ticking along so nicely we thought now would be a good time to introduce some sheep work to his routine.

Over the coming weeks we’ll be taking Elliot to an adjacent field to wherever the sheep might be grazing, and put him in the “relax” position for about ten minutes while the sheep mooch about near him but on the other side of the stock fence.  George has an important job to do here, his job is to lie in a “down” next to Elliot to show him how it’s done.  Elliot will be allowed to look at the sheep but not fixate.  He’ll be on his lead and supervised at all times.

Yesterday was a big day for Elliot, his first day relaxing with the sheep!  We had him in his “relax” right next to the sheep but behind a fence.  Some of the sheep came up to investigate and Elliot stayed relaxed the whole time.  He did brilliantly!  The energy stayed calm, the sheep didn’t seem phased by him and we were more than happy with how it went.

Today we took him over again and repeated the process.  We’ll be doing this every day for the next few weeks now.  Later on we’ll repeat the process but with the hens.

There’s no way of telling how long it will be before we can let Elliot mooch around in amongst the sheep (on his lead), but we’ll know when we know.  You can’t rush things like this, Elliot and the sheep both need to get used to each other’s presence and then start to build a relationship.  We’re very much looking forward to seeing how he progresses over the next few weeks.