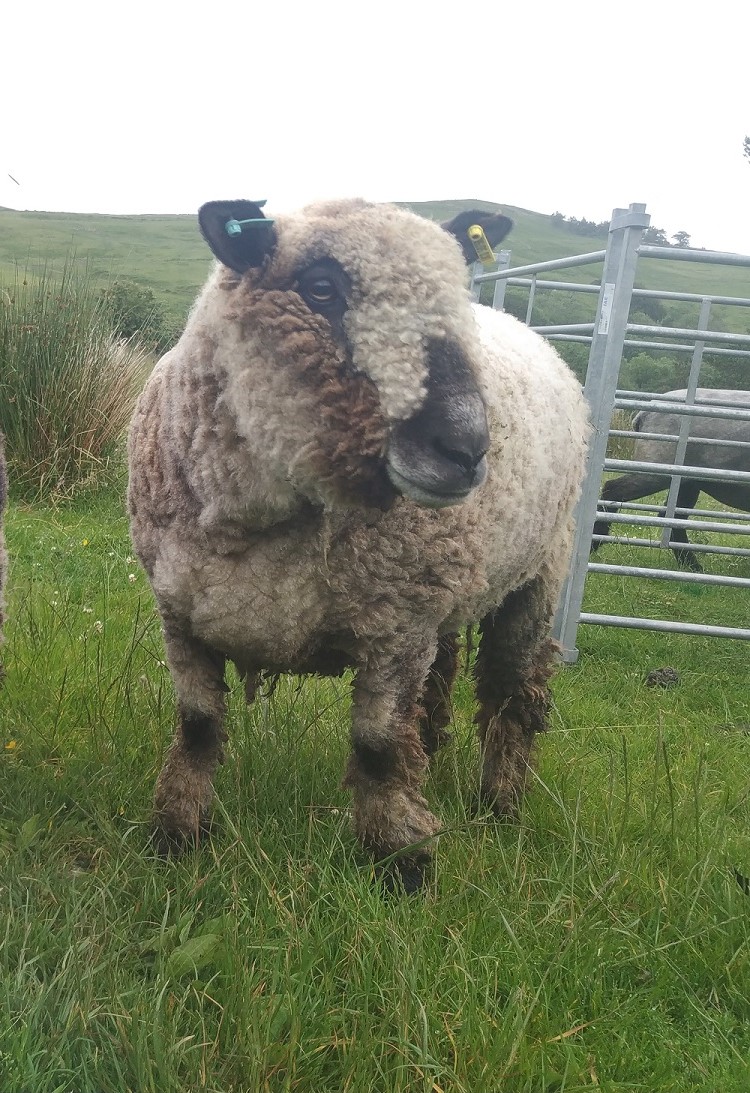 Every so often sheep get sore feet.  This is not too surprising as they spend a lot of time on their hooves as they go about their daily business.  Sore hooves are usually caused by “foot rot” which is a bacterial infection.  Foot rot is really common in warm, wet summers such as the one we’re having this year.  Bacteria loves nothing better than to hang around in warm, damp soil.  There are however lots of other reasons a sheep could be limping so it’s always important to check the hoof carefully and find out what’s wrong before deciding on a course of treatment.

This morning on the early morning animal check Adrian noticed Yarr was limping.  Heavy rain was due later (again!) so I decided to whizz out as soon as I’d finished breakfast and take a look at Yarr’s hoof to see what was wrong.

I grabbed my rucksack and filled it with everyone I’d need:  a bottle of Betamox LA antibiotic, a syringe and needle, gloves, hoof clippers, a can of antibacterial blue spray, some sheep nuts and a bucket.

As the sky got darker I set off across the fields looking for the sheep.  Luckily they were grazing not too far from the house, however I’d need to set up a pen and get Yarr into it in order to have a look at him.  As luck would have it we’d left four hurdles stacked not too far away, so I set off to get these and trudged back, dragging them through the long grass.  Hurdles are quite heavy and I can only manage two at a time so I made this journey twice, all the while hoping the sheep didn’t migrate somewhere else in the meantime!

Luck was on my side and as I set up my little treatment area, the sheep were still grazing nearby.  Yarr was sitting down only a few meters away so he’d not have too far to walk on his sore foot.

I called him over and he made his way straight into the pen for which he got a big fat cuddle as a thank you.  Yarr loves his cuddles, he’s very affectionate and fortunately he’s one of those sheep who doesn’t have an aversion to walking into pens.

With Yarr safely enclosed I took a look at his hoof.  I worked out it was his back right and I had a bit of fun trying to keep him still while I inspected it.  Sheep don’t like you lifting their back legs, it throws them off balance and they kick out, sometimes they can catch your hands so you have to watch you don’t get hurt.  Using my body weight I wedged Yarr up against the hurdles with his head in a corner so he had nowhere to go, and lifted his back hoof as I did this.  His hoof felt hot to the touch so I guessed he probably had an infection.

Just to be sure there was nothing else causing his limp, I cleaned his hoof really carefully.  I removed the dirt and grit from the sole area, then I cleaned up the area between the digits which can sometimes get clogged up with little clumps of mud and all sorts.  Then I trimmed off a bit of excess horn.  This done I gave his hoof a good going over with antibacterial spray.

Then, I disentangled myself and set about preparing a wee injection for him.

As Yarr’s a big boy and I didn’t have Adrian there to hold him still, I went with the “sheep nut solution”.  This is basically a distraction so the sheep doesn’t notice the needle going in and goes like this: “pop sheep’s head in a bucket with a sprinkling of nuts in the bottom to distract sheep whilst needle goes in”.  The last thing I wanted was Yarr careering round the pen with a needle sticking out of his rump, ruining his experience of coming into a pen being a positive thing.

The sheep nut solution made the injection go very smoothly, so much so that I managed to take a photo.  I don’t think Yarr felt anything which is always good when it comes to injections.

This all done and Yarr happy, I let him out and off he trotted to join his pals.  We’ll keep an eye on him over the next few days and if he’s still limping in two days, we’ll give him another wee jag until the infection clears up.