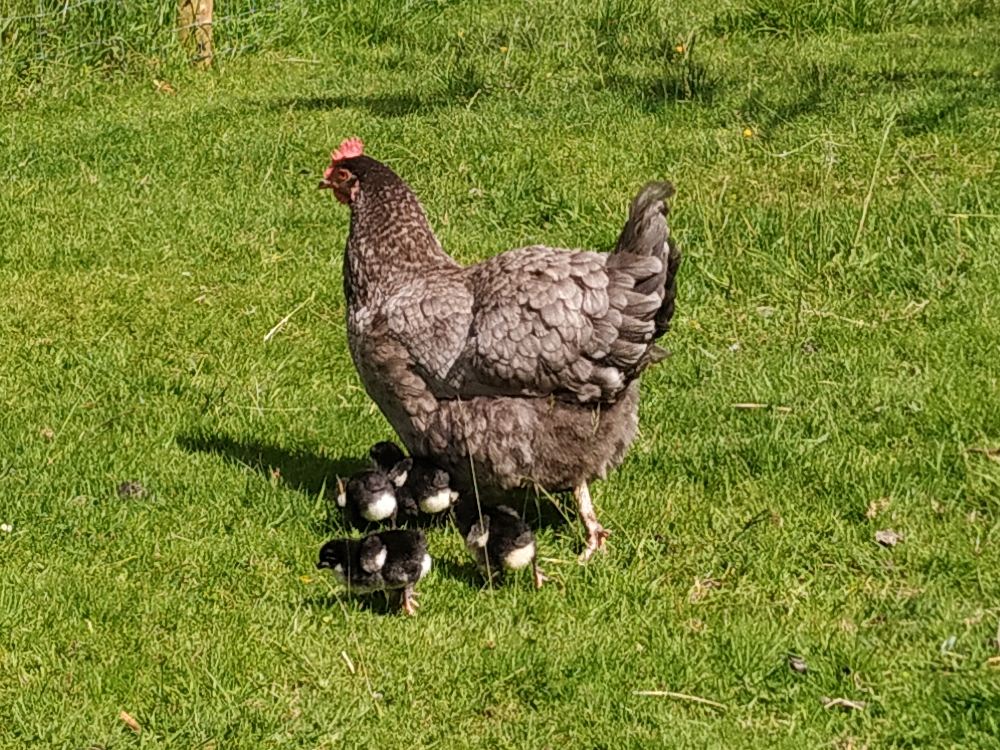 On Saturday, we spent some time watching our newly hatched chicks in their safe and secure run. It soon became clear that they already needed larger premises. Although they were safe where they were, the grass was showing signs of wear and tear plus, they needed to get out and about and get some natural food and exercise. Also, this means their mother, Mrs Mills Junior (MMJ), can teach them what they need to know. Over time, we have learned the best policy is to trust the animals – they know what they’re doing.

Our hens free range, but we do have fences to keep them away from danger, mainly the track (delivery vans) and neighbours’ cats. Though hens can fly, a 90cm high stock fence is enough to keep them contained.

Having, some years back, had chicks happily charge through these fences and all over the place, we installed chicken wire around the perimeter. We also put in a few hedgehog tunnels so the hedgehogs could still roam freely. Tiny curtains were enough to stop the chicks. Over time, the odd gap had appeared. mostly around the gates. So, before we could let these chicks out, the main area needed to be checked and made chick proof.

We also decided to move the sheep out. They have been using the lambing shed to keep out of the sun and rain. This is situated in the orchard where the hens roam. Fortunately, we have a field shelter and a “silvo shelter” so we closed off access to the hen area. The other hens will find their roaming area reduced, but it’s still an acre or so.

Sunday, we set to work. I say ‘we’, but mean ‘me’, Nicole being busy with our new dog Elliot, I raised the ground level under three gates using some of the road scalpings we have for just such occasions. Ten barrow loads or so were duly wheeled in. I also attached chicken netting to the gates and made sure the gaps at either end were covered.

That done, we opened the door at the front of the run. MMJ was initially reluctant to set forth, but eventually wandered through. She was closely followed by four chicks. As she headed slightly further away, chick number five ran up and down inside the run, not quite able to work out how to follow her. Thankfully, she did find the exit and caught up.

Having sat on eggs and chicks for three to four weeks, the first thing MMJ did was have a dust bath. She found a shady corner and got to digging, all the while making contented clucking sounds. The chicks stood around waiting, bored, until having waited long enough, they started jumping all over her. Eventually, MMJ got the hint and took them for a walk. The other hens had seen them by now but, thankfully, seemed completely disinterested. In fact, MMJ took them over to say hello and announced their presence by jumping onto Clippy, the flock matriarch, and giving her a taste of what might happen should she get too close to her precious chicks.

We kept a close eye on them all, but MMJ seemed to know what she was doing so eventually we left her to it. After, of course, we’d tempted them into camera range with a few chopped up strawberries.

Chicks being little cutie pies, we took a few photos and these can be found in the chicks gallery. We may add some as they grow up. In the meantime, it’s loads of stress for us as we worry about cats, kites, buzzards, golden eagles (we have the occasional visit), sparrowhawks, crows, stoats, foxes and so on.