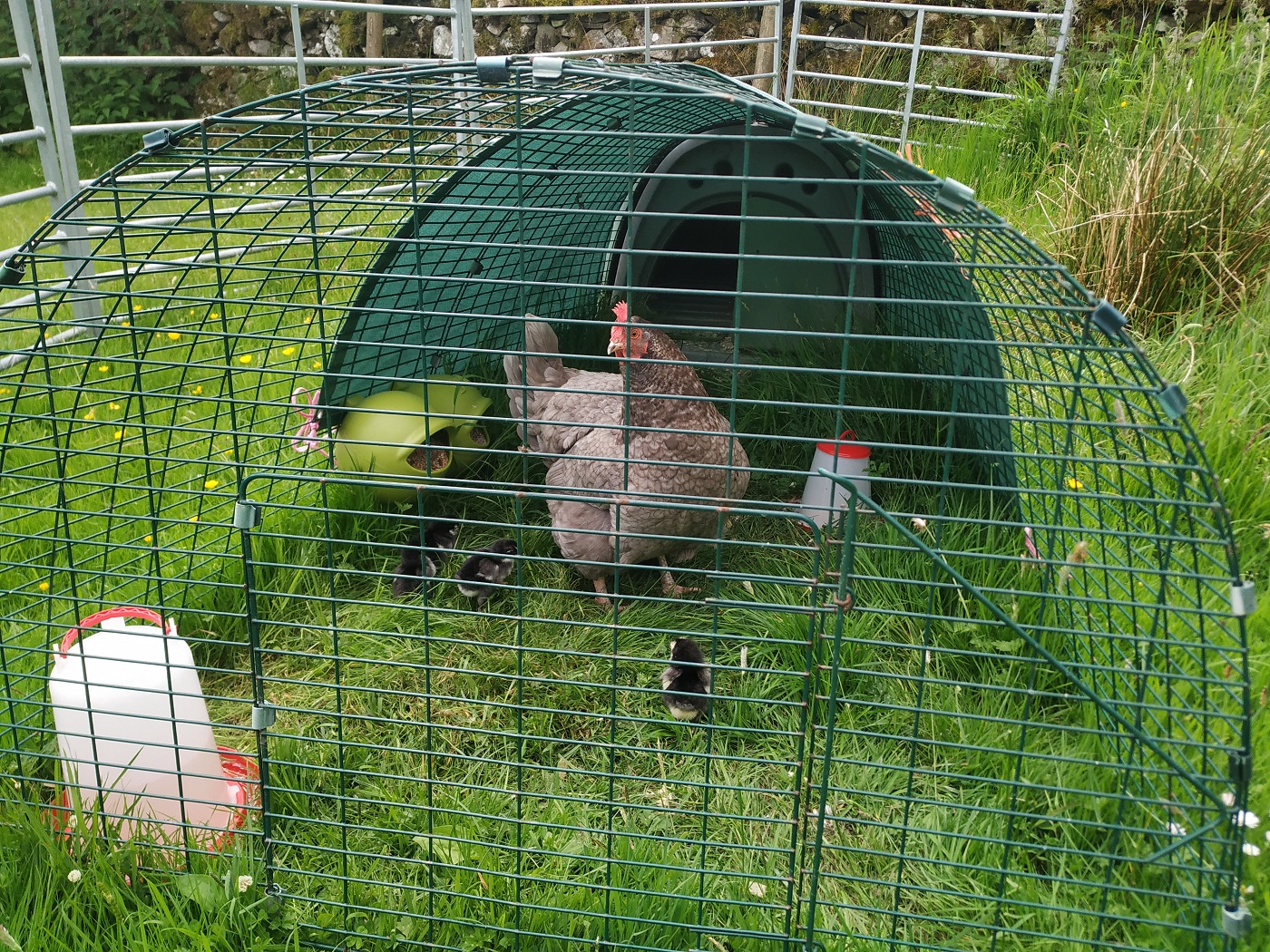 About three weeks ago, we mentioned we had a broody hen (Broody Hens Conundrum); Mrs Mills Junior (MMJ) to be precise. After last year when two hens sat on eggs but none hatched, we decided to source fertilised eggs. It was made easy by the fact that MMJ was broody but not actually sitting on any eggs.

So, we moved her to a secure location, her own personal run safe and secure from the weather, predators and nosey hens. We settled eight eggs underneath her and sat back to wait. 24 days was the time to hatching according to reliable sources.

This week, they hatched, a little early we suspect. First we knew was Friday morning when a tiny ‘seep seep’ could be heard. Peering down the run into the hen house revealed MMJ peering back accompanied by a hatchling stretching its neck to look at us. We had chicks!

We kept our distance, despite much temptation to peek more closely. Today, we were rewarded by the sight of MMJ taking her brood out for a walk in the sunshine. I say walk, what I really meant was nap. MMJ was sitting there happily and one tiny head was poking out from under one of her wings. We both stood and watched, our breath held in anticipation. A few minutes later (long minutes let me tell you), a second head popped out from under her front. Two chicks. Moments later, two more heads. Four chicks.

Eventually, all four squeezed out and started mooching around in the grass under MMJ’s watchful eyes.

At this point, Nicole sneaked round and checked the hen house. Of the eight eggs, five had hatched. We waited and watched, but number 5 never appeared. With things to do, including sheep to shear (Shearing 2022 – hand clipping the woolly Ryelands), we left them to it.

Later on, I made a cuppa for Nicole and took it to her at the shearing pen. On the way back, I checked in on MMJ. She was up and about scratching away happily and was surrounded by five chicks.

This is excellent news. Not only will we have chicks brought up and accepted into the flock, MMJ only had to sit for 3 weeks. Last year, sitting on eggs that turned out not to be fertilised, Clippy and Pepper sat for 9 or 10 weeks, maybe longer, and their condition suffered as a result. MMJ’s comb is bright red, as it should be, and she looks to be in excellent condition. All in all, we are well pleased we decided to give her her own enclosed space.

Next job, check the wider perimeter so the chicks can’t get through the fence onto the track.