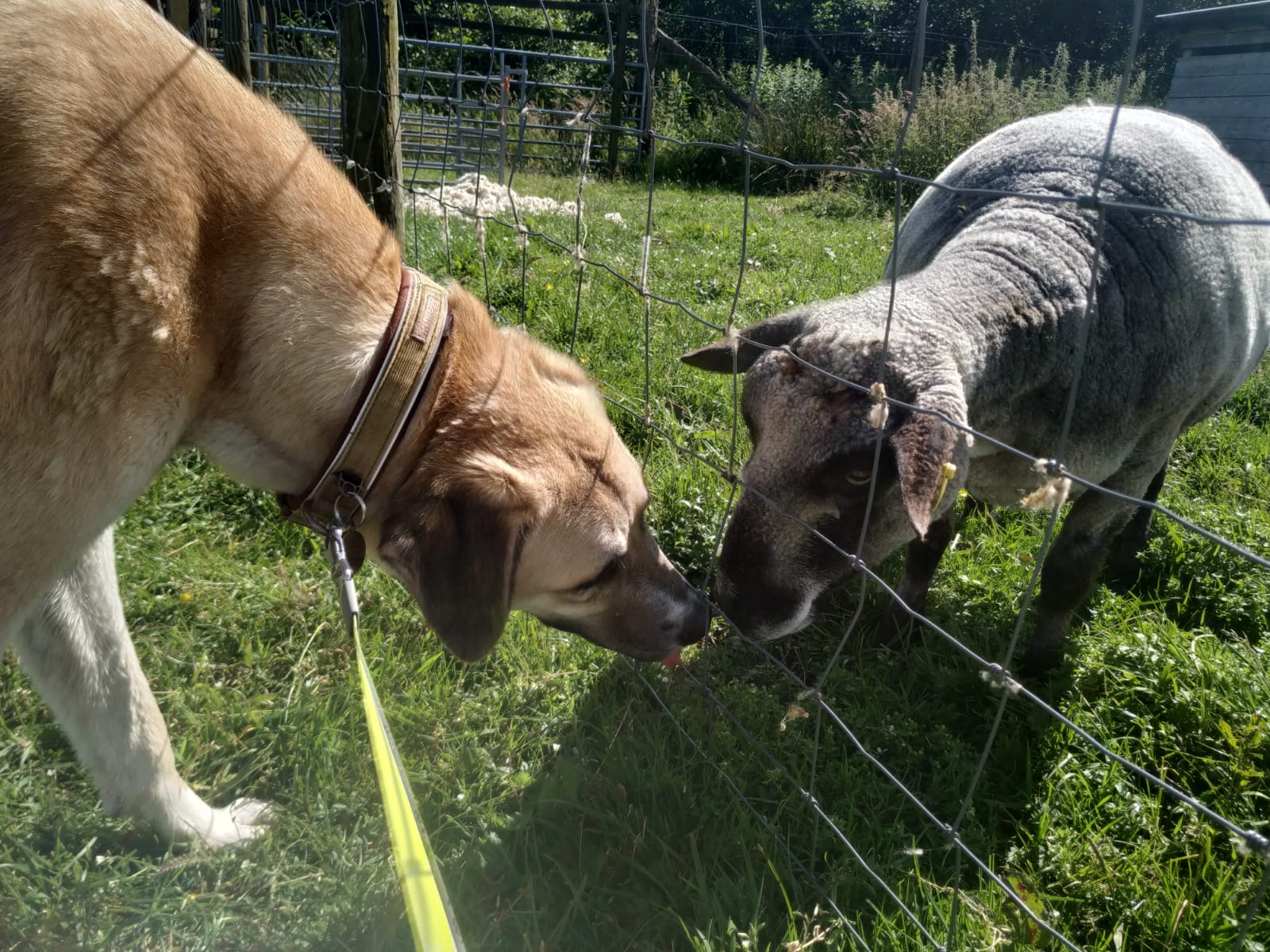 As you may have read in Training our rescue dog Elliot and introducing him to the sheep, Elliot has been with us a few weeks and is slowly being trained in the key commands of sit, down and recall. As a farm, we also have to introduce him to our livestock, our sheep and our hens. Our approach combines dog psychology with a hint of training.

One of the reasons we chose this breed, Anatolian Shepherd (aside from already having one), is that they are bred to guard livestock. This means their instincts should be in all the right places when it comes to sheep. Nevertheless, introductions need to be managed carefully for two reasons; first we need to check that Elliot’s attitude towards sheep is as it should be and second, we need to let the sheep know he’s not a threat.

Early indicators were that Elliot would be just fine. He was interested in the sheep, but not fixated. Also, we heard from his foster carer that he had protected a lamb that had strayed into their dog enclosure. All looked good on that side.

The sheep, however, needed some convincing. While they have accepted George, their first reaction to Elliot was a bit on the panicky side. One in particular, Ymogen, verged on the edge of hysteria. It only takes one to set the rest off.  As with humans, sheep have a fight or flight response. On seeing a predator, they will either gang up on it or run away. We needed to avoid both of these at all costs. The first could spook Elliot leading to an unpredictable reaction. The second could easily trigger his chase instinct. If either of these happened, the time for introductions would lengthen considerably.

The plan was simple. We walked Elliot by the sheep every day, stopping for a while with a fence in between. This gave the sheep time to assess Elliot and us a chance to assess Elliot. The breakthrough was Thursday last week. Elliot had gained my trust so I allowed him to sit at the fence and look at the sheep (hitherto he’d been put in a relax position). About 7 sheep lined up to examine him from a distance of around 3m.

After a few minutes, the flock matriarch, Selene, peeled off and came over. Without ceremony, she stuck her nose through the fence and sniffed him. He sniffed her back. They to’d a fro’d a while until she held position at which point Elliot licked her. At that point, I knew everything was going to be fine.

Later that day, I took Elliot to within 3m of the sheep but with no fence. All but two or three were lying down, chewing the cud. Ymogen was not impressed, but the rest looked at Elliot briefly and carried on. Yssi headed towards us with intent, but 2m away, turned round and flopped down, clearly unworried. Well pleased, I led the dogs away.

Next day, Nicole took Elliot to the fence and once again, Elliot and Selene exchanged a kiss. Later, she walked Elliot in the same field as the sheep but kept a few meters away.  As hoped, 5 or 6 sheep came over. Elliot started to groom Witchy and licked her face all over before moving on to lick Selene’s face. He even licked one of their bottoms, something we encourage (George does this) as clean bottoms reduce the threat of flystrike.

Today (Saturday), Nicole sheared Vera, the last of the sheep to be sheared while Elliot, George and I were in the field next door pulling out thistles. Well, I pulled out thistles while the dogs lolled about, Elliot on his long lead tied to a fence post. The energy was calm and relaxed, perfect (aside from the pesky flies).

After Vera had had her trim and all the thistles were gone, we took Elliot right up to the flock again. All was fine, the best part being that Ymogen was the first sheep to come and say hello.

There is still much work to be done. All of the above is done with Elliot on a lead. Like all Anatolians, his response to recall is very much dependent on what he’s doing at the time. We are working daily on improving that. There are plenty of exciting distractions here including various wildlife trails (deer and badger), pheasants everywhere, hares and small furry animals galore. Last thing we want is Elliot clearing a stone dyke in pursuit of a deer, our recall command relegated to his to do list.

Also, we’ve postponed his introduction to the chickens as we have a brood of chicks (see Chicks Abroad ). We have noticed Elliot is just ever so slightly more interested in birds than we’d like. It may be that, before being rescued, he hunted birds in order to survive. Who knows. Anyway, we’ll go through a similar process once the chicks are a little larger.