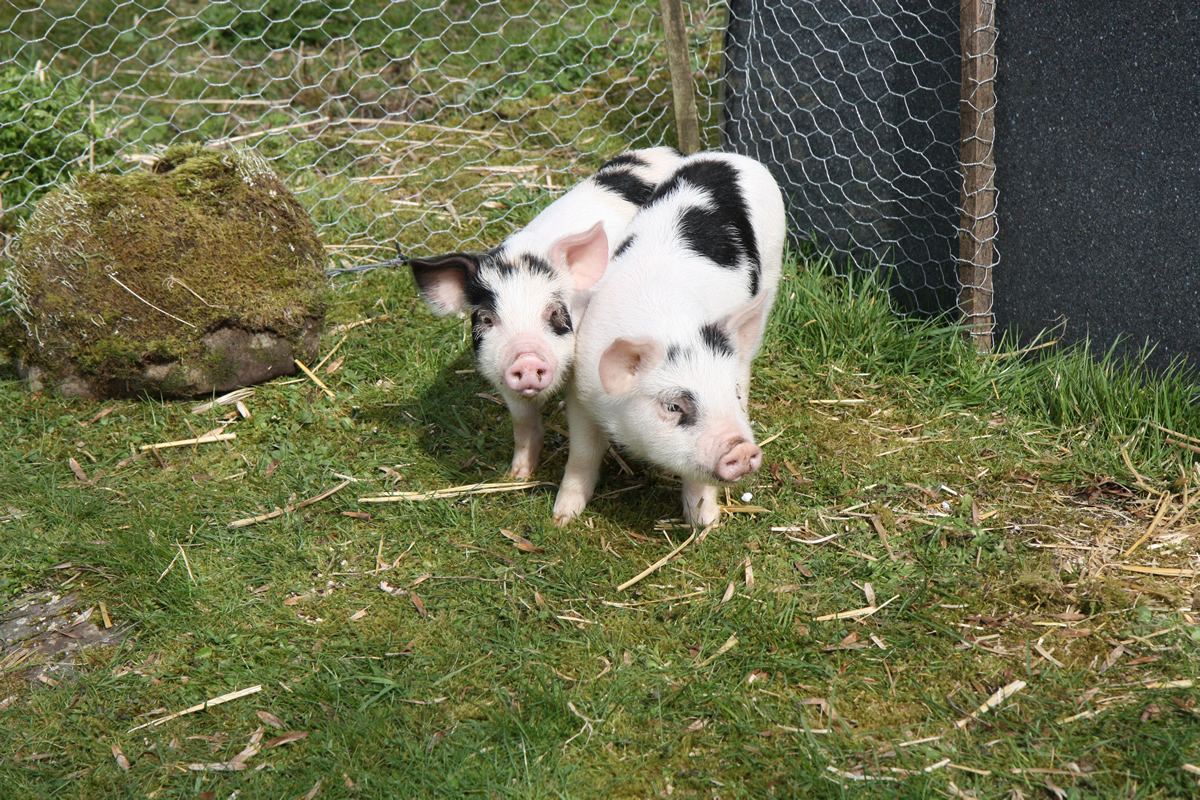 Nicole and I have a habit of coming up with an idea and then just getting on with it.  So it was with our pigs.  That said, I did spend an hour or so with friends of ours who had their first pigs last year.  While it was very useful, it also gave us a false sense of security.

We got our gilts last Friday.  I had prepared the arc and an area surrounded by an electric fence.  Our friends’ pigs had a similar setup and they had no problems so far as we know.

We got our wee piglets and let them loose in their new home.  Now, had we done our reading before, rather than after this event, we’d have been better prepared.  But, we let them loose and we watched them.  They tried out the electric fence a couple of times and retreated from it.  It all seemed good.

Later that day, I left them for a moment to get some food for them.  When I got back a few minutes later, it seemed awfully quiet.  Had they finally gone into the arc I asked myself.  I looked and they were not there.  I looked behind the arc.  No piglets.  Just then I caught a flash of white disappearing behind the greenhouse.

Quickly I ran in and called Nicole – “They’ve escaped” I yelled in a mild panic.  Nicole rushed down, cornered them and caught one with ease and passed it to me.  I stepped back to let her catch the other one.  I looked at my pig, who was struggling and showing surprising strength.  When I had calmed her, I looked up and the second pig and Nicole had disappeared, totally.

I looked round and tried to figure out where they had gone.  A few minutes later, I heard a shout “I’ve got her” as Nicole emerged from the chicken run, pig in arms.  Turned out that piglet number 2 had showed a surprising turn of speed, had charged through 3 stock fences, through various bushes with Nicole in close pursuit (in her slippers).  Finally, she had corned the piglet in a paddock.  Poor Nicole had lost her slippers and cut her hands vaulting barbed wire stock fences, but had shown an amazing determination.

So, we stood there, pigs in arms, pondering what to do.  Nicole wanted to put them in the house.  I wasn’t so sure.  In the end, we put them in the arc (which is what we should have done in the first place) and placed a gate across the opening.  We secured them for the night and retired for a much needed fino.

Next day, we built a smaller run inside the electric fence with chicken wire.  They’ll stay in there for a week or so while I construct a pig proof, stock fenced area.  I started on that today but progress has been slow due to the large number of subterranean rocks.  I also fitted a door on the arc so they can be safe and secure at night.

In the meantime, the piggies have really settled and are more than happy with their arc (which they love) and their small outdoor space – for now.  And Nicole has worked her usual magic such that have gone from snarling at us to eating from our hand and presenting themselves for back scratches.

The lessons we learned?  Well, first, it may be home for us but for the piglets it’s anything but, they need to be shown the arc which can quickly become a safe haven.  Second, while we think they’re cute, to them we are unknown large scary predators and their first instinct will be to run.  And third, electric fences are not, in themselves, enough to keep pigs in.  They actually need to be trained as to what to do, otherwise, if they get a shock, they are as likely to bolt through the fence as back away from it.