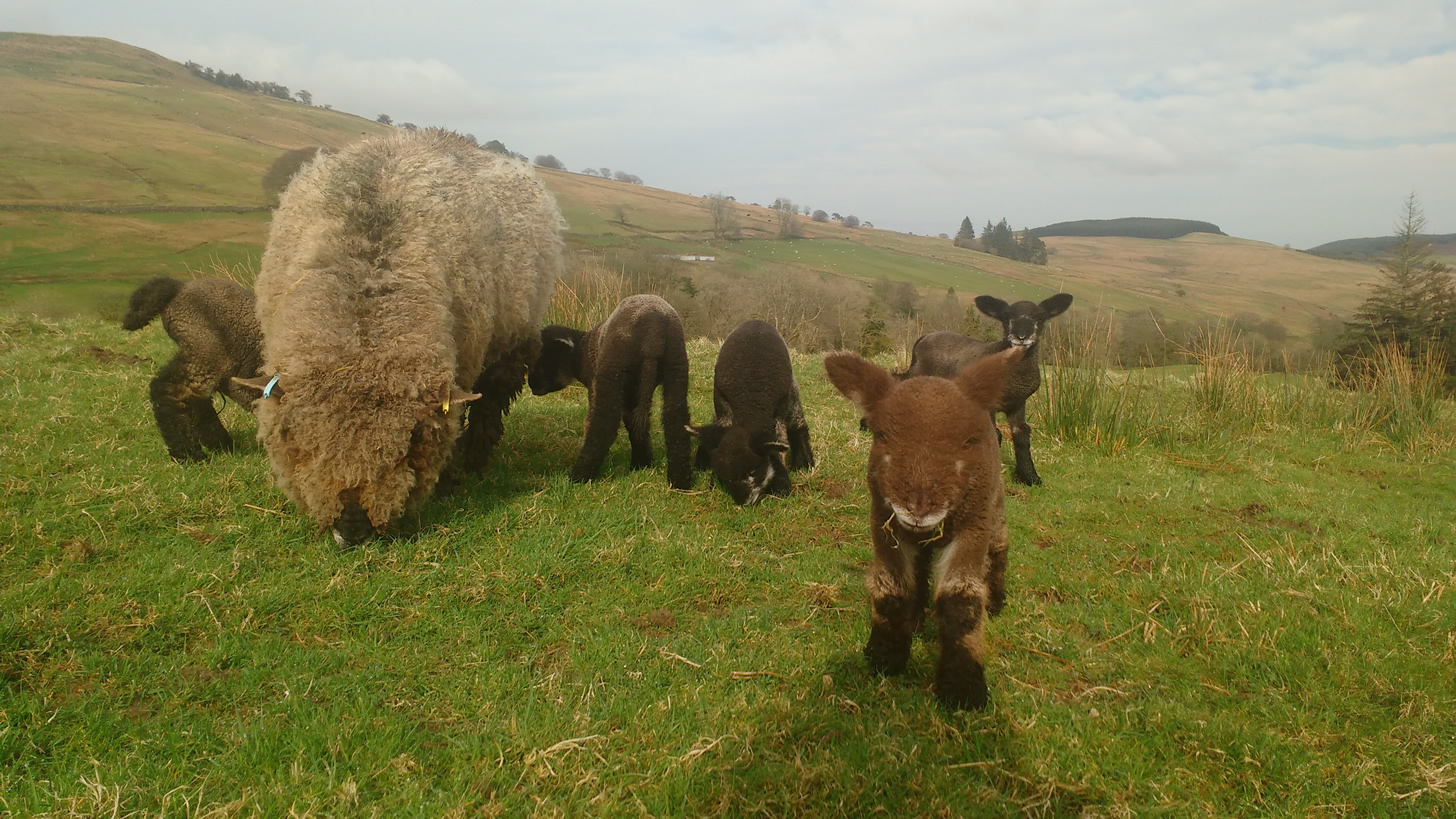 I think it is fair to say that neither of us were really looking forward to lambing this year.  The previous two years had proven tough.  Given our ewes’ propensity for lambing at awkward times, we were planning 2 hourly checks with all the sleepless nights those would entail.

That said, we had worked hard to get the facilities right, so at least there would be no half mile walks in the middle of the night to check up on them.

So, 11 ewes were led into the lambing paddock about 4 days before the first was due.  They settled in really quickly.  The first sign of anything happening was a prolapse.  That was the first of those we’d had and so out came the vet.  Later in the day, it seemed to come out again.  We called the vet but they were all out so the lady on the phone tried to talk us through what to do.  At first they asked if we could push it back in, but that wasn’t possible.  It didn’t look good so out came the vet again.  Only it wasn’t a prolapse this time but a placenta that shouldn’t have been there.

All in all, the vet wasn’t happy and called for a caesarian.  Nicole and the vet led Ursi, the ewe, into the shed while I was dispatched to fetch buckets of hot water.  One thing I will never forget is the smile on the vet’s face when we turned the light on and she saw our facilities.  Our sheep are also very tame and so easy to handle.  I swear the vet smiled all the way through the operation.  As Nicole was holding Ursi, I was handed two rather large wet ewe lambs and quickly gave them a rub down and made sure they were breathing before we put them under Ursi’s nose.

What is truly amazing is how fast Ursi recovered, up and about almost straight away.  The painkillers helped, but even so, it was remarkable.

Now, we had four what we called special cases.  These were all ewes that had lost their lambs in previous years for one reason or another.  The second to lamb was one of those, Vi.  Last year, her lamb died in the womb so she too had experienced a Caesarian but had had no lamb to show for it.  This time, her first lamb was a malpresentation, head and one leg in the right place, but the other one tucked back.  They can’t be delivered like that and we hadn’t dealt with one of these before, so out came the vet.  It was a long wait (half an hour felt like eternity), but he arrived and delivered another two healthy ewe lambs.  We were happy but Vi was ecstatic.  She still is!  There are few things to equal the look an a ewe’s face when she has new lambs.

Witchy followed soon after.  This was her first time but she too had a malpresentation, a breach (when they try to come out backwards).  This was even more complicated so out came the vet.  Not only was it a breach, but it was quite a large lamb.  After a struggle, she got him out and handed him over to me for a quick dry and to get him breathing.  He didn’t respond that quickly, but eventually he seemed OK.  While that was going on, out popped another little ewe lamb – our first ever brown lamb.  Sadly, the ram lamb just suddenly faded away and there was nothing we could do.  Our first casualty, not an easy thing to deal with.

So, three lambings and already four visits from the vet.  Yikes.

The next was somewhat surreal.  I had been up at 4am and there was nothing happening. At 6am, I saw a ewe with lambs out in the paddock.  What was surreal was that all the mums and lambs were penned up in the shed at night.  My first thought was to wonder how they had got out.  But it was Vera.  For the second year running, she had popped out her two lambs with the minimum of fuss.  She had even dried the first off completely.  So, I woke up Nicole and we moved Vera into a pen with her two young boys.

One of the things I should mention is that we have learned how to give the lambs a really good start.  Nicole has become an expert in drying them off with a fan heater and getting them latched on to the teats.  Once dry and warm, they have enough energy to look for the teat.  It only takes a few hours for them to learn where it is and become experts.

So, one poor we lamb aside, things were going OK – not a single sign of watery mouth disease yet.

And then began the wait.

During tupping, we had marked the tups stomachs with yellow paint.  When the ewes were marked, we made a note of the date.  Gestation is usually 150 days give or take.  But 4 of the would be mums passed their dates.  And another day went by.  And another.  Then Bluemli popped out yet another massive single ram lamb (as she did two years ago) capably helped by Nicole.  We called him Yumbo!

And another went by, in fact, 10 days went by with no sign of the 4 ewes getting any closer.  Quite stressful, let me tell you!  Then, finally, Peaches (another of our special cases – lost both two years ago) popped out a little boy and girl followed quickly by Sparkle (another special case having lost one to a breach and one to watery mouth two years ago) popped out two healthy girls.

We’d managed 5 deliveries on our own.  The end was in sight.

Now, we had only had the tups in for two weeks so we knew there had to be a time limit.  We reached that day with three ewes still enjoying the lambing paddock lifestyle.  Sheep nuts and haylage on demand, comfortable quarters and a little grass if they felt like it (it was just beginning to grow).

That day passed.  Surely something had to happen soon.

Luckily, next day, Sky went into labour.  It was a difficult delivery and she was so tight we called in a vet to help.  She delivered a health boy and girl.  Next day, it was Star’s turn and she popped out two healthy boys aided by Nicole.

That left just Selene.  Now, aside from a raddle mark, Selene was showing no sign of pregnancy.  We had booked in the vet for a routine visit to help with castrating the males and we asked her to give us a second opinion.  Selene was not in lamb.  Phew, we were all done with 18 healthy lambs.

Talking of vets, we were lucky this year.  We had to call a vet out for one of the cows and then she came up to see the lambs and spotted that one of them was not quite right – no bottom!  Not uncommon in lambs but we’d missed it.  A quick op and the lamb (Ysabel) was transformed into a little bundle of play.  On the routine visit I mentioned above, we had spotted that 3 lambs had turned in eyelids.  It’s tricky thing to deal with as it requires an injection into the eyelid, but they all recovered really quickly.

And now they are all out in the field with lots of space to play and lots of fresh grass for the mums.  Play time is around 7 and we nip up to watch them bounding about hopping and skipping.  It’s what it’s all about really.