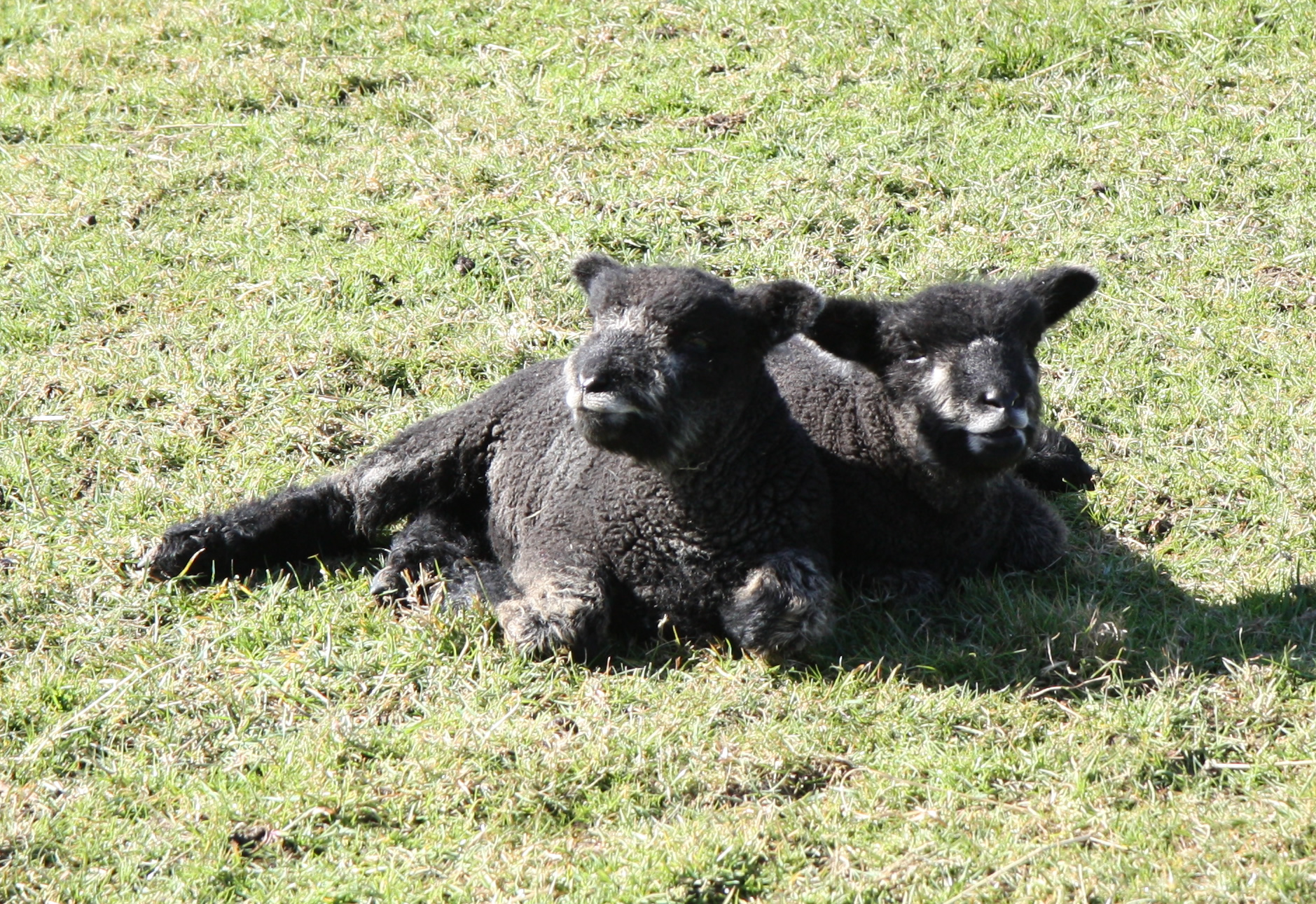 It’s Easter Saturday and I type this in a state of tiredness such that I can hardly think straight. To say I have a new found respect for sheep farmers would be an understatement. There’s a saying in this world that a sheep’s ambition is to die and it spends it’s life looking to do this as fast as possible. It even came up in Terry Pratchett’s Discworld series (Granny Aching). I think Terry Pratchett must have known something about sheep!

Good Friday started with a miracle. For once, it was sunny and warm (you might think so, but that’s not the miracle). I was sitting at my computer and keeping one eye on the paddock with the lambs. I noticed one of the ewes was chasing our dog, George, all round the field. In case you’re wondering, George is a natural at guarding livestock, it’s what his breed are for. And a George in the field will certainly keep foxes away as well as next door’s dogs.

Anyway, I went down to investigate. The sheep all know George and are highly tolerant of him. This was unusual behaviour. What was even more unusual was that Selene was chasing him. Selene is one of the most serene of our sheep. By then Nicole had joined me and we put George out of the field. The energy was not helped by next door’s yappy mutt barking at the sheep, so I chased it away and turned to see what was what.

Now, you have to understand that we believed Selene was not pregnant. There had been no raddle mark, she had not seemed to fatten up and there were no physical signs. So, when we saw a burst water bag hanging from her behind, we were somewhat puzzled. It took quite a few moments for us to realise that not only was Selene pregnant, but that she was about to give birth.

Now, having been “not pregnant”, Selene had been turned out a while back and so had not had the supplement given to pregnant ewes. Overfeeding sheep nuts helps sheep to achieve their life ambition, so you have to be really careful.
Having not had this supplement, Selene popped out two lambs in quick succession. The lambs were smaller due to the lack of extra feed.

This was our miracle and we were elated.

This is just the beginning of the story.  At first all seemed great.  Selene was super attentive and both lambs were showing a good and strong instinct to feed.  The weather was warm.  All was great.  So we sat and took a moment to enjoy our good fortune.  Given the seemingly immaculate conception and it being Easter, we named them Witchy and Warlock.

Later that day, Nicole noticed that Witchy was looking a bit lethargic.  We took her inside.  She would not feed.  In fact, she showed a remarkable lack of will to live (see sheep’s life ambition above).  Well, we had already lost Wicca earlier in the week to an infection (Watery Mouth).  This had affected us both deeply.  We did not want to lose another one.

Nevertheless, despite multiple tube feeds, lamb pick me up and life aid being administered, Witchy continued to remain lethargic.  All through the night Nicole nursed her.  I have to say I am in awe of Nicole.  I was so tired I stayed in bed.  I was awake and ready to help, but Nicole never asked.  I don’t know how she did it.  At 5am, I told her I’d take over and left her to sleep.

Witchy was hanging in there, but at best I was giving here 50/50.

Of course, a storm was approaching so we had decided to bring the lambs into the shed.  That caused something of an uproar in the flock.  Nicole had been halter training them, but they knew was something was up and did all they could not to become ensnared.  However, one by one, Nicole dragged them in from the field while I ran ahead my arms full of wriggling lambs.  One ewe lost the plot and it took ages before we managed to lead her in; by placing her lamb in front of her nose.

Of course, once in the shed, they realised they were out of the crap weather and they were so happy.  In fact, the atmosphere in there today has been really great.

Except in one corner where Selene lay with Warlock (Witchy was still inside with us).  Selene was ill.  Having not fed her up, we had overcompensated and given her too many sheep nuts (they need the nuts to hep milk production).  Now she had tummy ache.  This is life threatening for sheep (see sheep’s life ambition above).  Nicole rang the vet and the vet talked her through a plan of action.  Life aid (basically electrolytes) was administered and painkillers and antibiotics injected.  In the meantime, Warlock was now cold and so he came in for a warm up.  I may not be great at staying up all night, but I can warm a lamb up quickly as I generate a lot of heat (we have an emergency lamb warming box, but I prefer the body heat method).

To our huge relief, Selene recovered quickly and they were soon reunited.

In the meantime, Witchy slowly seems to be improving.  She is still reluctant to feed, but is taking some in.  We keep telling her she must drink or it will be the tube, but she doesn’t listen.  Thankfully, she’s taking in around 50ml a feed and she needs around 100ml every 4 hours, so there’s hope yet.

I never thought lambing could be this hard!