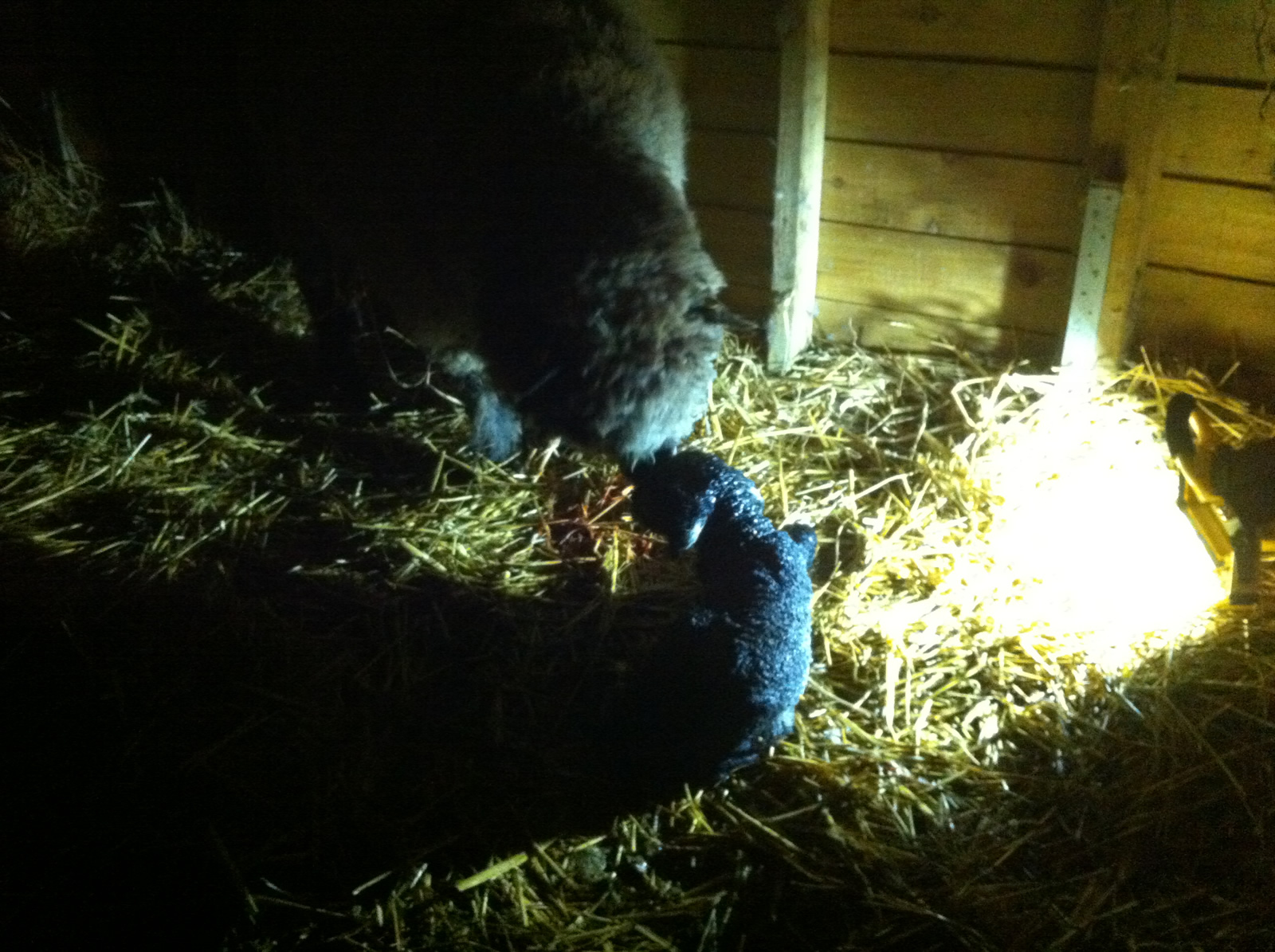 I can’t believe how tough lambing is turning out to be.  We have been doing 4 hourly checks for what seems like forever, but is in fact just 3 or 4 weeks.  On top of that, every ewe that has lambed so far has presented with problems of one sort or another.  Mainly, they just can’t seem to get the poor wee lambs out.

We have had amazing support from our friends who have come over at each birth and helped rescue the situation.  Of the 7 ewes that were expecting, 4 have now produced lambs.

Our best surprise was Bluemli.  She’s our youngest and is a first time mum.  We were expecting problems (you can do just a little too much reading you know).  Well, last night she did have trouble squeezing her lamb out, but with a little help, out popped a very cute ram lamb.  And Bluemli was licking it straight away, the first of our ewes to do so.  In fact, she’s besotted with her little lamb and talks to it constantly.  Having learned that this year, the RFBS deems names to start with ‘W’, we have named him Wart.  And this is not after those annoying little growths we sometimes get.  It’s after the nickname given to the the young King Arthur (before he was king) in T.H. White’s classic novel.

The best part of this is that we had Bluemli’s due date completely wrong, sometime in mid April).  Crafty Ginge, the ram, had obviously managed to have his way without leaving a mark a bit earlier than we had realised.

And then today, around lunchtime, Sky went into labour.  Now, Sky had been behaving a little strangely and truth be told, I had a strange feeling all was not well. She had been headbutting Bluemli while Bluemli was giving birth and then seemed fixated with her lamb – we had to put her in a pen  for a while.  Sadly, my fears turned out to be true.  The first lamb was still born and it seemed he had been dead before she went into labour.  We suspect that Sky was aware of this and hence the odd behaviour.

Thankfully, she was having twins and out popped a beautiful baby ewe lamb.  She has been named Winifred (after Nicole’s aunt) and is already Winnie (for short).

In the meantime we discovered a great device for feeding our orphan lambs.  As they grow, they are getting more and more frantic at feeds.  We now have a rack into which we can put their bottles and they can help themselves as and when they like.  Of course, the first attempt didn’t go too well, not helped by my not hanging it correctly and Larry (or wlarry as must his name must start with ‘W’ :)) kept butting it.  But, this evening they have got the hang of it and are starting to take smaller feeds on demand which is just great.