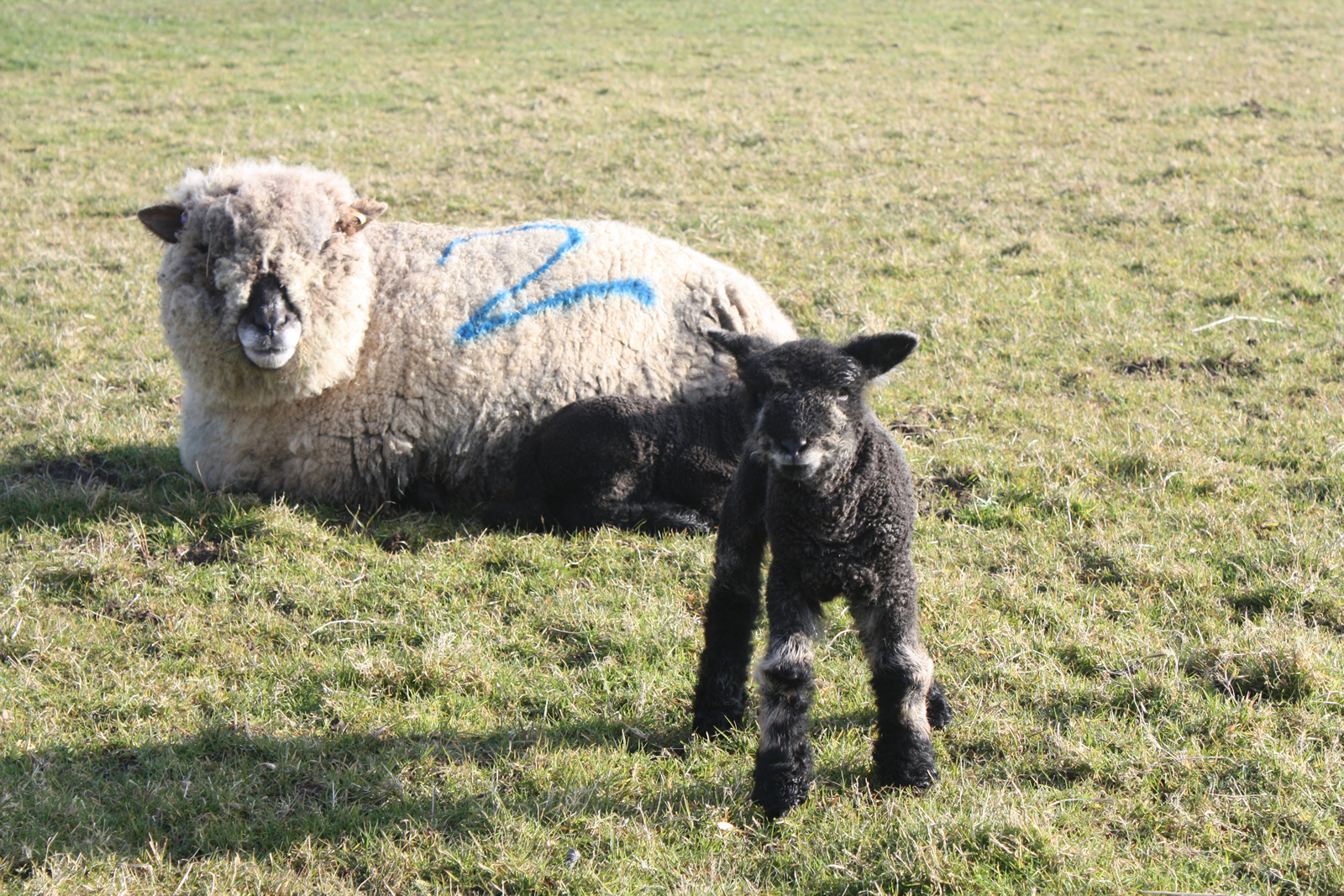 After the introduction to the deep end of lambing on Thursday, we spent Saturday waiting for Shelby to give birth.  We were hopeful it would not be a repeat of Thursday.  I mean, we love hand rearing the first two, but ideally they should be raised by their mother.

Well, around 7pm Nicole spotted that Shelby was in trouble.  We called a friend who also breeds coloured ryelands and asked for advice.  He had been quite “vocal” in telling us not to ring the vet if there was a problem, but to ring him.  Despite having 22 ewes of his own, he and his wife came round to help.  If Scarlett’s experience was traumatic, then I don’t really know what word to use to describe what Shelby went through.  Her cervix was even tighter.

It took some effort to get the first lamb out.  And then, well over an hour, nearer two, to bring out the second.  Working in such a tight, constricted and slippery place, it was proving almost impossible to get both front legs and head lined up correctly.  But he carried on and with the help of Nicole and some baler twine, finally we had number two.

To be honest, I couldn’t believe she was alive, but she was.  The best part of it all was the totally calm atmosphere throughout.  Shelby didn’t struggle, she just lay there as if she knew we were helping.  The other sheep kept a respectful distance.  Both lambs were presented to Shelby and despite being exhausted, and sore I bet, she immediately bonded with them.

But, she was so was so exhausted she just lay down.  We constructed a pen around her and the lambs where she lay so as she would not have to move.  Then we withdrew and left them in peace for an hour.  In the meantime, I drove over to our friend’s house to get some antibiotics and a decent syringe.  We have a huge lambing kit, but we had no antibiotics – typical!  When I got back, we gave Shelby a jab.  I say we, but Nicole actually did the injection, she is much braver than me.

Then we checked the lambs and decided to give them some feed by bottle.  We were able to milk Shelby to get some of her colostrum and then topped it up with some we made up.  Bottle feeding newly born lambs is not that easy, they don’t expect a rubber teat!  One of them just wouldn’t even try.  I popped her under my jacket and Nicole warmed up some towels on the aga.  Soon, she warmed up and began to wriggle and we were able to feed her too.  Then, once again we were up every two hours checking and giving them supplementary feed.  We were also really worried about Shelby.

But, the good news is that all three survived their ordeal and seem in good health.  Nicole has been training the young lambs (Camille and Florence) to use their mother’s teats to feed.  And they are learning, though still getting the odd top up.  And Shelby is proving to be a wonderful mother, she’s a joy to watch.

So today, being a lovely sunny day, we turned them out into the paddock.  The other ewes were curious and Peaches seemed a little put out and tried to head butt one of them (we couldn’t tell which one as they are virtually identical).  Before Shelby could intervene, the young lamb went head to head with Peaches and sent her scurrying backwards.

Checking later, they are all happy in the spring sunshine.

And Larry and Lisa continue to grow stronger every day.  I have taken a bit of time off work so will build them an outdoor pen in the paddock tomorrow so they can be outside among the others but safe.  Of course, we’ll be bringing them in at night into their luxury indoor bed :).