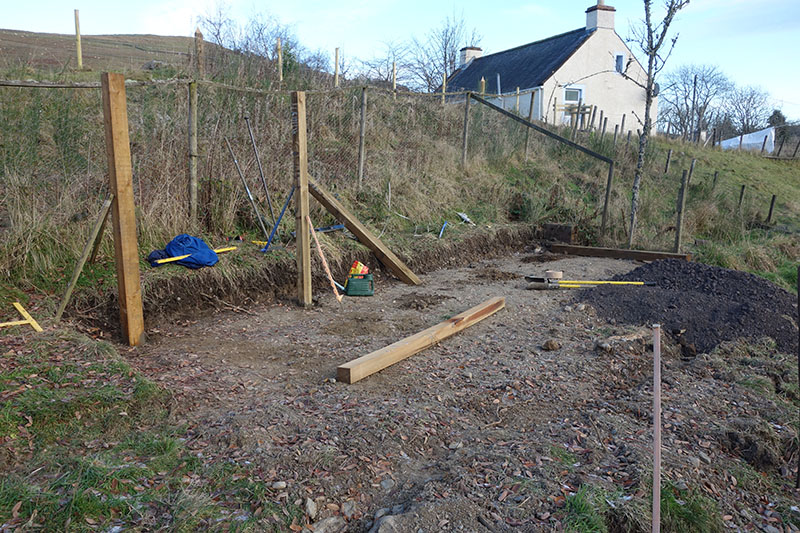 Last year’s lambing was hard.  We used an existing shed but it didn’t really go as planned.  We ended up having to lamb one ewe out in the fields and that meant a longish walk two or three times during the night for nearly two weeks (you can read about that here). Plus, the lambs were out of sight over the hill.

So, we had a think about it and decided to build lambing facilities in front of the house.  There’s a bit of an orchard there and it’s also where the chicken run is.  So, we drew up the plans.  It involves fencing on two sides.  One end already is fenced and the other has a dry stone dyke.  Plus, we need to fence the chicken houses and feeders off so they can get out but the sheep can’t get in.

It has turned out to be a long job.  This is mainly as other jobs suddenly surfaced and distracted me – pig pen extension, helping plumber with the new bathrooms, sorting out the new utility room.  And with winter approaching, all I had managed to get done was the hen area and one fence.

Luckily, my brother in law arranged a visit.  We told him to bring his drill!

The lambing shed is to nestle into a hillside so that it is tucked away out of sight.  This meant there was a bit of a drop, a metre in fact.  That seemed quite a lot, so I did some levelling.  When Matt got here, we got straight into putting the posts is.  This should have been a lot easier than it was.  However, the freezing temperatures meant the fast drying postcrete did not dry in seconds, but more like a couple of hours!  Nevertheless, we pressed on and got all the posts in.  It resembled a woodhenge!

We left them to settle and next day started on the walls.  We put up some of the walls to help stabilise things and then got to work on the roof.  We worked pretty much non-stop and by then of the day, we had all the roof beams in place and half the roof on.

Matt headed off home.  The news announced the imminent arrival of storm Caroline.  Great I thought, just what we need, high winds around a half finished shed.

But with Matt’s help, we’d broken the back of it.  I got the rest of the roof on and three walls up.  I left the fourth so I can dump some hard core in to make a better, and level, floor.  It survived the storm.

Now I am waiting for the ground to freeze this weekend so I can use the tractor to get the hardcore in.  Nearly job done.  And next year, lambing should be so much easier.  The ewes will have access to shelter, hay and fresh grass.  We’ll be able to watch them from our kitchen window.  And everything will be close to the house.