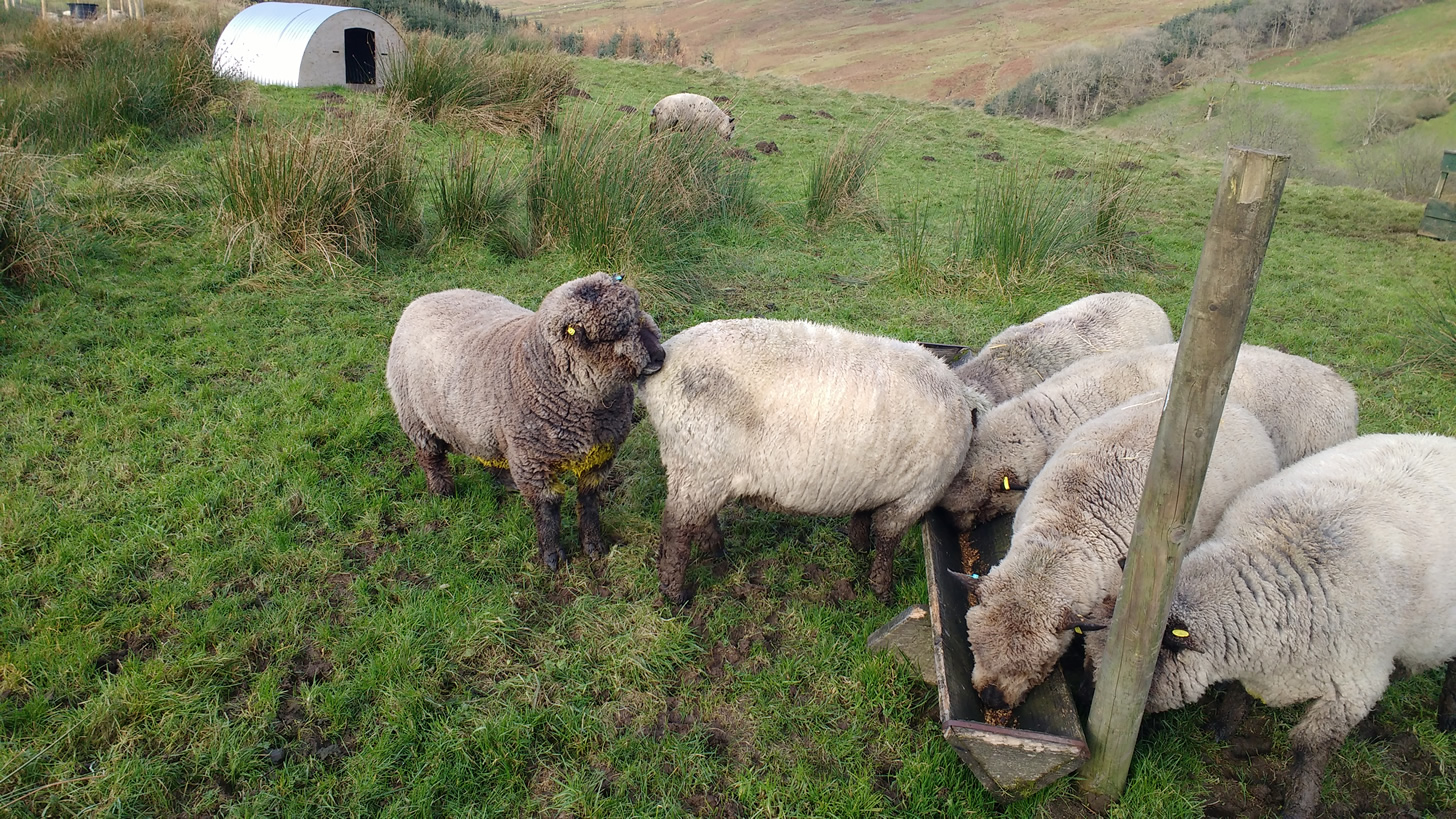 It’s two weeks to the winter solstice and the snow is falling gently outside as the afternoon draws towards night.  Storm Caroline is in the area but fortunately, the really high winds have passed us by.  It’s just a wee bit cold and blowy, so I thought I’d catch up with the blog.  It has been a few weeks!

Well, tupping time has been and gone.  We are targeting lambing for late April, so tupping was timed for mid November onwards.  Our two young tups (who we raised from lambs) remained blissfully unaware of the treat in store.  Over the year, they have matured and calmed down a bit.  This made raddling them easy, both their tummies splashed with bright yellow greasy paint.  It really helps to know when the lambs are due!

So one chilly but bright November Saturday morning, we began the process.  This was not just a case of throwing the two tups in with the ewes.  We had worked out the family trees and each tup was allocated 6 ewes.  All this year’s lambs plus one ewe with ring womb were to be kept apart.

So, first job, separating the ewes into three groups.  Nicole handled this and in next to no time we were ready for phase 2.  We moved the first group of six ewes into a small field.  Then, it was off to fetch Wart (these were his 6).  Nicole led him down with the halter.  Now, Wart and Wallace have never been apart so we had given Wallace some sheep nuts in the hope he wouldn’t notice Wart’s absence.

As we drew close to the six ewes, Wart caught their scents and was transformed from a reluctant foot dragging ball of wool to an eager beaver and was through the gate in a flash.  He couldn’t believe his luck and wasn’t sure which ewe to approach first.  The ewes were not that impressed to be honest and largely ignored him.  But, Wart was happy and we left him to it.

I nipped back up to Wallace’s field and Nicole went off to fetch the second group of six.  Wallace joined me in looking down the hill as they approached.  He remained remarkably calm, even as they came through the gate.  Of course, the first thing the ewes smelt was the sheep nuts and they were straight over to the trough.  This gave Wallace the chance to check them out, which he duly did.

After attempting to mount Peaches, who was not impressed, we noticed Vi and Vera had made a beeline for Wallace.  In fact, they stood either side of him making eyes and leaning into him.  If you can imagine a sheep flirting, well that’s what it looked like.  Wallace was happy.

We left them to it.  Wallace was indeed a busy boy and within 2 days 5 of his ewes had the tell tale yellow splodges on their rears.  In Wart’s field, a couple played hard to get so while most will be born in the first 3-4 days of lambing next year, there will likely be a two week window which we will have to monitor.

Of course, it’s never quite that simple.  A few days in, Nicole rushed back from the morning feed and check to announce that Wallace had taken his gate off and was in with Wart.  Well, we had to get him back because his mum and sister were in there!  Plus, Wart had access to his mother and grandmother.  So, we sorted them all out and reset the gate and tied it to it’s hinges.  And there’s me thinking only pigs could do that.

After around two weeks, the weather crashed and it became wet and cold.  So, we separated them back out so that they all had access to shelters.  Wallace and Wart were not that impressed at first and there was a bit of biffing.

But all is calm now, until April that is…