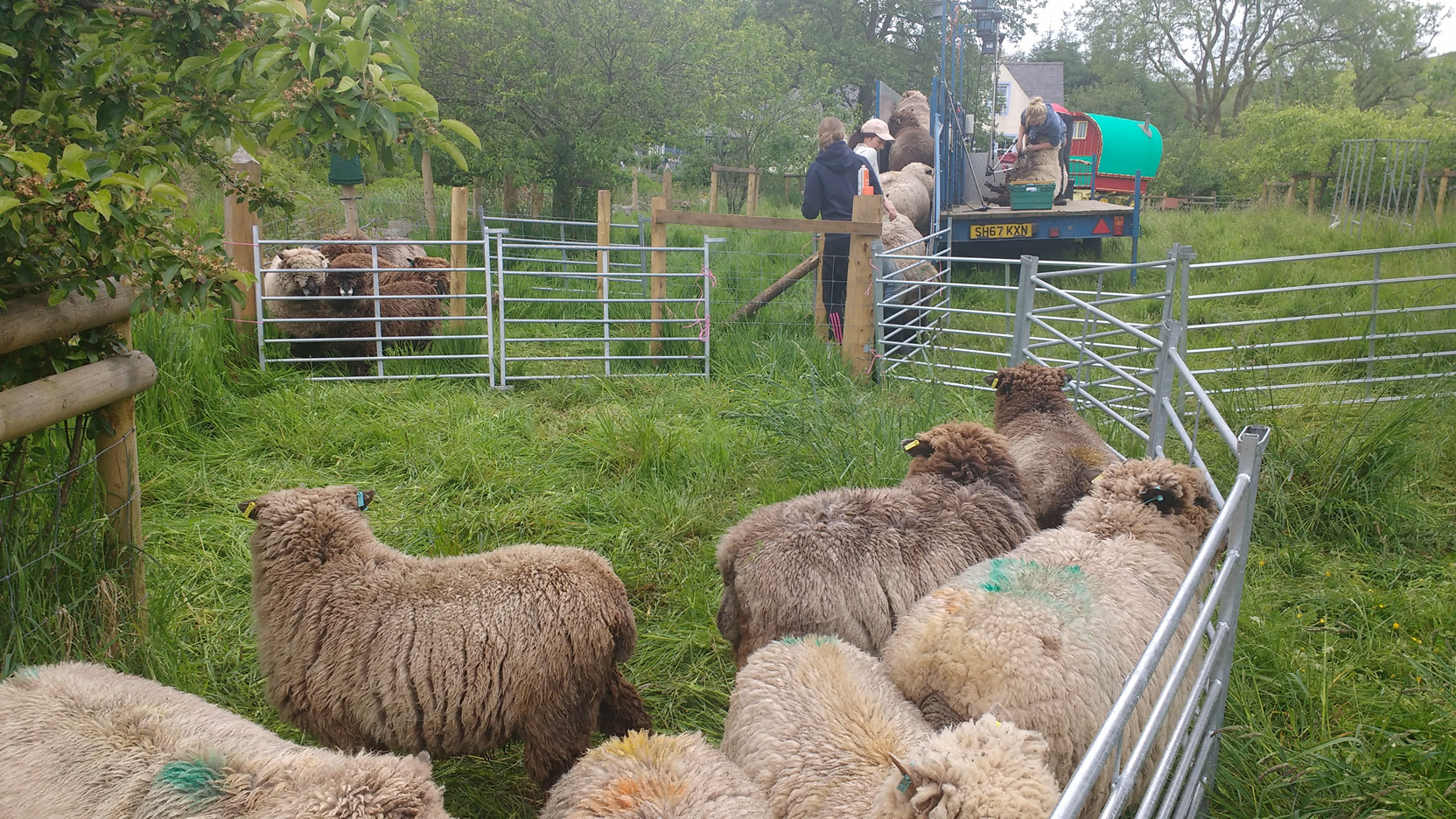 Sheep have to be sheared once a year, it’s vital for their wellbeing.  Here, in SW Scotland, we shear mainly in June.  While Nicole and I have both done the shearing course, we contract out our shearing to professional shearers.  It’s a really hard job and the top shearers shear a sheep in just a few minutes.  So, all in all, it’s better for the sheep as it’s over quickly.

After last year, when we had assumed we’d just call in the sheep as they were needed (wrong!), we had built the sheep handling area.  We were looking forward to using it for the first time.

The shearers had let us know they were coming about lunchtime, so after breakfast we brought the sheep in.  I say we, Nicole just called them and in they trotted.

We let them have a look around the paddock.  For the hogs, this was where they had been born last tear – I wonder if they remembered.  Anyway, the lambing paddock was full of tasty morsels – meadow flowers, tree sprouts, a hedge and low hanging leaves.  They had a lovely time.

We also had to catch Yakozuki as he was limping.  He needed an antibiotic jag.  But, they were all a bit excitable.  So, after an hour or so, we brought them into the handling area and let them settle down a bit.  We caught Yakozuki and gave him his injection.  Then we settled down to wait.

The shearers duly arrived and we had our first problem.  Their trailer only just squeezed through the gate.  Note to self, bigger gate needed.  However, with skillful trailer manouevring (that puts me to shame), the shearing rig was soon in place.  It turns out one of the shearers is from one of our neighbouring farms.  It’s good when that happens.

We gathered the sheep into a smaller waiting pen and started to guide them up the ramp.  Ha ha – they took one look at the ramp and doubled back.  In fact, it was quite a tricky job getting them up the ramp – needed two people.  One to move the sheep towards the ramp and one to catch them as they turned back and keep them moving forward.

Even then, some of the hogs were small enough to turn round and drive them all back down again.  Still, the two shearers were zipping through them so these were but minor hiccups.  We kept the orderly flow of sheep up (we had 27 in total being sheared).  Of course, there’s always one.  Peaches – the matriarch and eldest of our ewes decided that shearing was not for her this year and every time we turned our back, she quickly backed herself down the ramp into the waiting area.  Three times!  I had to stand behind her for a while.  I compensated this loss of freedom with lots of back scratches – Peaches loves her back scratches.

It’s great watching top shearers in action.  What with all the keeping the flow of sheep up, I didn’t get to see much, but Sparkle was enraptured.  You can see her in the picture on the right, head resting on the gate, watching Bluemli being shorn of her locks.

Throughout all this, Nicole was labelling each fleece with the name of the sheep.  Each of these fleeces will be turned into a felted rug.  And so, we’ll know whose fleece each rug is made from.  Each rug will be supplied with a little history of the sheep it comes from.

Soon, all the sheep were shorn.  Nicole had also gathered them back into the holding area so that they would be out of the way of the trailer when it was towed out.

It’s funny how small and dainty they look without their thick woolly coats.

Once the shearers had gone and we’d had a quick cuppa, we took them back out into the main pasture.  There was a nice breeze there and that meant no flies and no midgies.  The sheep settled down and looked quite happy.  We think the shearing helps them regain full fields of vision.  The thick woolly coats can grow round their eyes causing problems.  We do trim them from time to time, but a full haircut means unhindered vision.  Bluemli even came in for pats, something she hasn’t done for a while.

And of course, Ymogem came over to pose for a photo.

It was a tiring day for all of us, sheep and humans.  So, we decamped to the pub for a well earned drink and a dinner we didn’t have to cook.