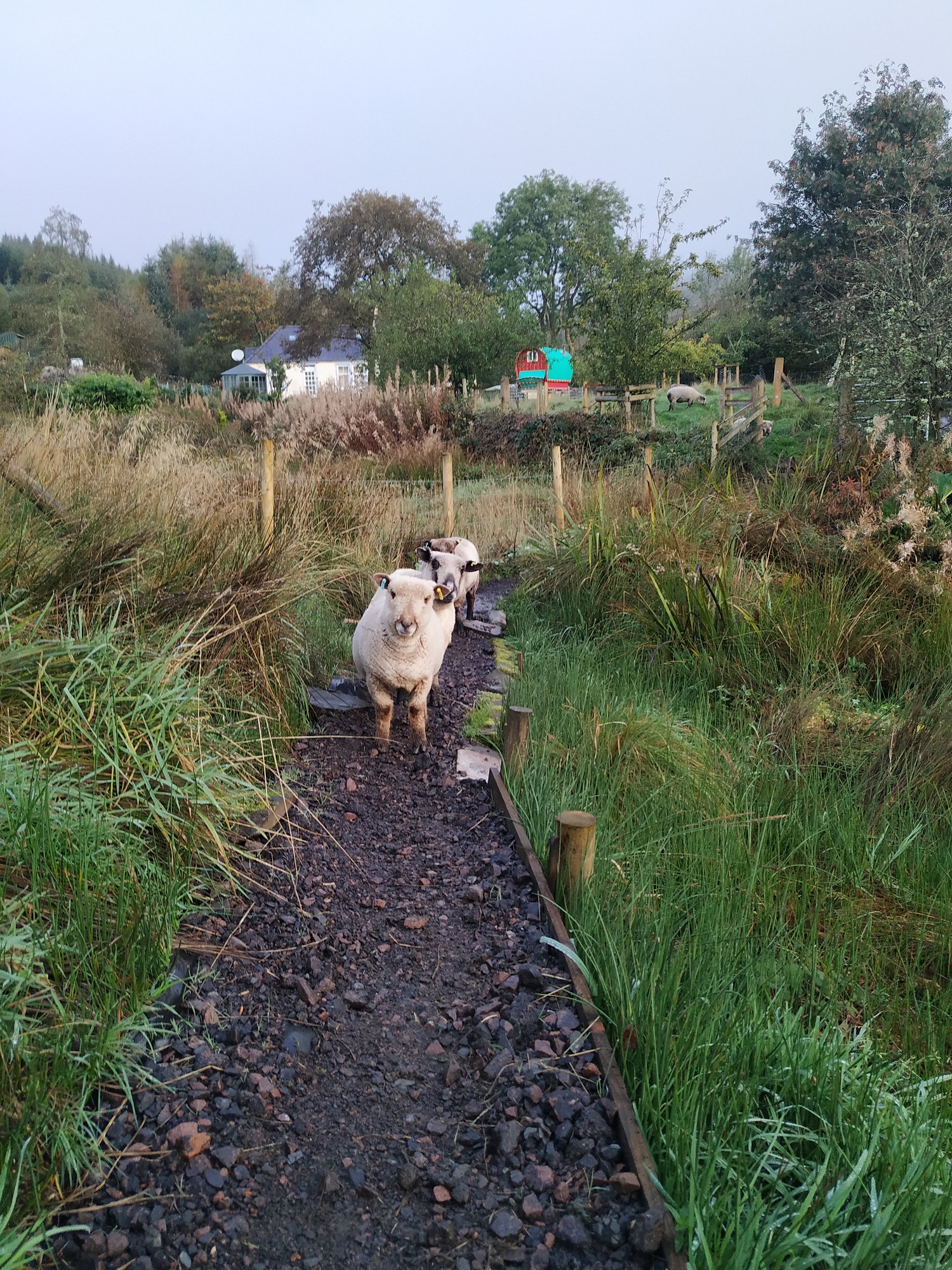 With autumn fast approaching and soggier weather, access to the lambing shed (now known as “general sheep/hen/shelter/meeting room”) in the orchard had become wet and slippery.

Getting to the orchard is a bit of an expedition for the sheep as it’s quite literally off their “beaten track”.  We had to show them the way at first, but they soon learnt how to do it and made it part of their routine.

To get to the orchard they have to come down a slope from the main field, trot along a rock lined path and then pop up through a gate on the other side where, voila, their shed is.  This is all fine in dry weather but it’s not been that dry lately so access has become somewhat challenging.  During the summer the hens would line up along the path dust bathing, not now!

Sheep are sensible creatures and instinctively steer clear of boggy ground.  It is a sheep’s worst nightmare to become stuck in the mud, their small hooves, spindly legs and barrel shaped bodies aren’t a good design for navigating marshy terrain so they’ll avoid it at all costs.  Unfortunately this can be quite hard in South West Scotland as it rains a lot and it’s often muddy.

The path to the lambing shed was not only becoming churned up, it was also getting really slippery due to it being on a slope.  So from one day to the next the sheep pretty much stopped using it.  This was unfortunate as during this time it wasn’t just raining, it was proverbially “chucking it down”.

Now sheep are hardy animals and will put up with whatever the weather throws at them, however, keeping sheep for a number of years and observing their ways has taught us that even they have their limits.  In prolonged rain they’ll actively seek out shelter whether that be huddling under a tree, standing in a long line by a dry stone wall or, stretching out in a custom built field shelter.  I know where I would rather be.

So, we decided the path leading to the shed, (now resembling a slalom slope) had to be made usable again if we wanted happy sheep.

I say “we” but it was all Adrian really.  I just helped bring some wooden poles down to make the edges.  Adrian was the one who brought trailer loads of “scalpings” down and spent hours shovelling it all down to create a walkway.

Once it was all done, we sat back and admired it and then walked up and down it a few times to try it out.  We were really pleased; it had a deep layer of scalpings all held in place by planks of wood to stop it slipping away.  It was not only functional, it looked great!

Now to wait for the sheep to reacquaint themselves with it.  After about half an hour, (truth is we couldn’t wait) we went and got them.  We brought Peaches the matriarch over first.  If she approved, she would lead the others down.

Peaches is a sensible girl, utterly reliable and a great matriarch.  Sure enough, apart from an investigative, bordering on suspicious, sniff prior to hoof placement, she was soon walking along the path, bringing to mind images of a certain wee girl from a certain well known book/film.

By now the others’ interest was piqued and soon all 19 remaining sheep were piling onto the path like a bunch of children playing musical chairs when the music stops.

Which was very amusing to watch!  And led to half the flock veering off and creating a parallel path. Most of them got the idea however and after a few days they started to include a trip along the new path to the orchard on their daily rounds.  They particularly enjoy visiting the orchard at the moment what with there being lots of apples lying around just waiting to be gobbled up.