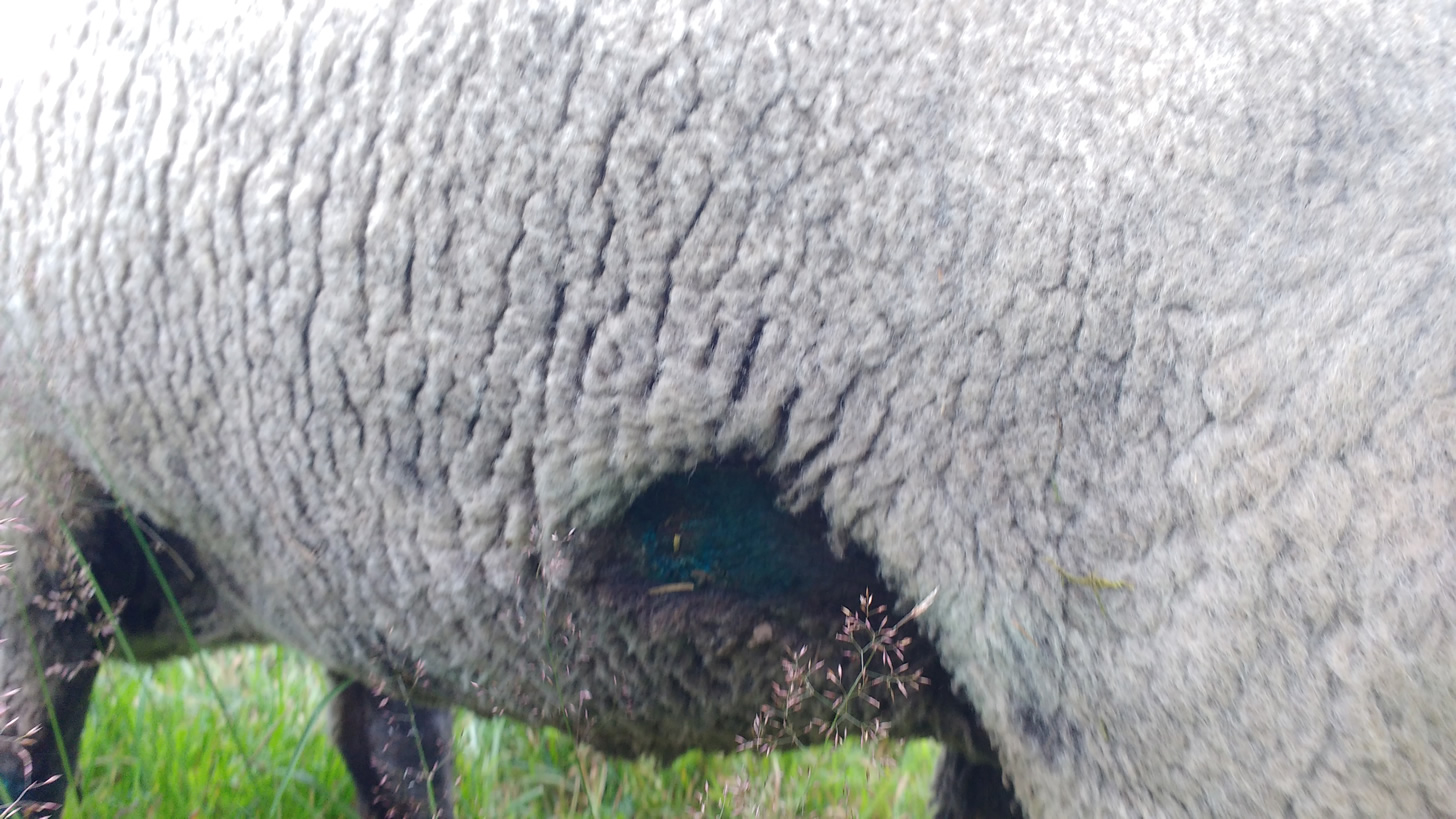 Vera, one of our Yorkshire lassies, has been on our radar for a while.  She’s one of three we brought over from a Yorkshire farm just after moving here and she has thrived, along with the other two Yorkshire lassies, Vi and Ursi.   Anyway, of late she has taken to sitting on her own in one of the shelters provided for them.

Vera has always had a bit of a tendency to do this, so no alarm bells were ringing.  Nevertheless, Nicole had checked her over just to be sure, and had found nothing wrong.  The last time a sheep went off on her own it was Scarlett whose ear tag had become infected.  But Scarlett also stopped eating and hung her head, (a sure sign something is wrong) whereas Vera could be seen chewing the cud and looking quite content as she sat in her shelter.

Yesterday was the year’s hottest day.  Even up here in the hills, it was pretty hot.  I was taking to dogs for their daily walk and I usually come back via the sheep just to give them a quick check and to say hello.  Vera was up and about, grazing with the others and I was about to head off back to the house when  I noticed her stamping her feet quite a lot and looking round.  This is the sort of behaviour that can be seen in early fly-strike, so I checked her.  No flies, eggs or maggots.  Then I noticed she had scratched her front leg raw.  Something wasn’t right.

I went and fetched Nicole and some iodine and we treated her wound.  Then Nicole checked for other wounds as all of a sudden Vera seemed to be very agitated.  We thought there had to be flies or maggots hiding somewhere.  After a careful inspection Nicole found that Vera’s skin, in the bare places where there is no wool, under her arms and the backs of her legs, seemed a bit inflamed and slightly hot to the touch, there were also some small crusty patches.  Our first thought was it might be “scab” however we haven’t had a case of “scab” before so we weren’t really sure.

So we duly called the vet and he came out and had a look.  After a careful examination he scratched his head and said he wasn’t really sure what it was, other than it wasn’t “scab”!  Basically, he said, it was in the wrong places for “scab”  and none of the other sheep were showing any signs, (“scab” is highly contagious).  Good and bad news – it wasn’t serious (good) but we were not sure what to do to treat it (bad)?

The swellings looked like they were a bit cracked and so could be infected so the vet gave her a mixture of steroids, anti-inflammatory and an antibiotic.   We wonder if she had had a bad case of midgie bites after shearing that hadn’t healed.  But we don’t know.  The vet thought it could be an allergic reaction to something she had eaten.  Maybe we will never know for sure.

We are monitoring her closely.  She looks a little better today (Friday), but she’s still a bit agitated and scratching and stamping her feet.  Fingers crossed it will clear up quickly.

And a quick update (Saturday).  She is out and about munching away happily.  There is still a bit of stamping, but nothing like two days ago.  It certainly looks like the really hot day aggravated things.  She is showing some photosensitivity which confirms the vet’s allergic reaction diagnosis.

To be honest, most of the sheep were finding it a bit hot, so it wouldn’t be surprising if it made the itchy parts worse.

Nicole is bathing the affected areas twice a day with chamomile tea.  We’re hoping that helps too.