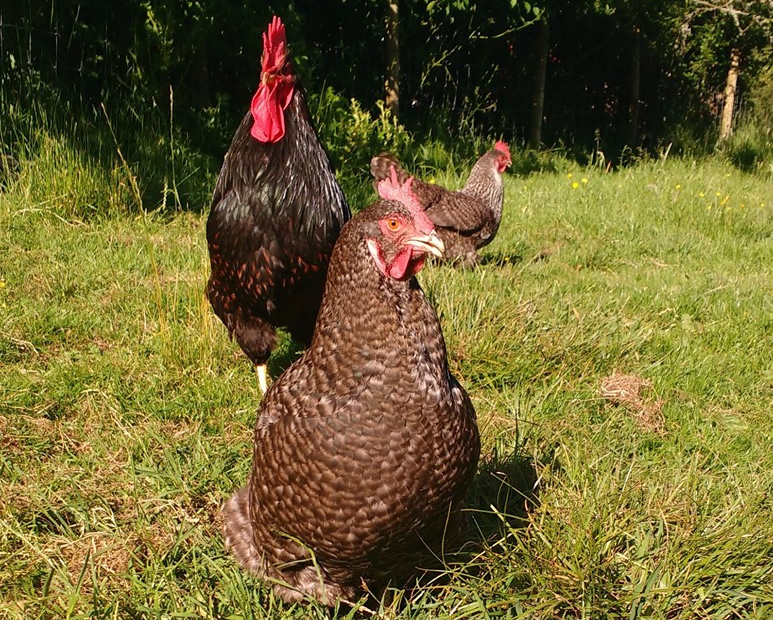 Since June, Bim has been suffering from egg peritonitis (see swollen hen), a common condition in hens of all ages for which the prognosis is usually death.  Given this poor prognosis, we asked the vet (who happened to be here looking at a sheep) to have a look.  We fully expected we’d be putting her down (Bim that is, not the vet).  That said, swelling aside, she looked really healthy and so we all thought it might be worth trying again.

The vet agreed with our plan and left us with a course of anti inflammatories and antibiotics.

Now, the problem is that while the antibiotics can deal with infections, they don’t really deal with the root cause (normally an egg yolk trapped in the abdominal cavity).  Nicole got on the internet to look for alternative approaches.  We also pondered alternatives to antibiotics – well we didn’t want to be giving her a jag every two days for the rest of her life.

We came up with an approach that incorporated a number of ideas.

The above sounds pretty complex, but it’s not really.  All the supplements can be mixed up and put in a bowl.  Bim, being the top hen, is always first to a bowl so, for us, it was fairly easy to make sure Bim got her “medicine”.  I say “us”, but it’s all down to Nicole really.

The net result of this is a that, for a time the swelling went down and Bim got back to being her old self.  When we wandered into the vet some time in July to pick up some sheep meds, the vet who had examined Bim happened to be standing there and asked how Bim was.  When Nicole said she had pretty much recovered, the vet’s jaw nearly hit the floor.  “That’s two miracles this year then” she said (or words to that effect).  I don’t think the vets can quite believe that Ymogen recovered from her broken jaw either (Ymogen’s Story).

Anyway, Bim was doing fine.  As she is about 5 years old, her laying days should be largely in the past.  However, a couple of weeks back, she went in to lay an egg.  Of course, no egg appeared, once again the yolk must have been “laid” internally.  Then she did it again and the swelling returned.  Despite all this, everything else about her was healthy.  You can tell when a hen’s time is close, they just stop.

Bim was starting to show signs of “stopping” in that she would still be in the hen coop at morning corn time.  We decided to give her another course of antibiotics.  At this time of year, laying drops markedly for all the hens.  The shortening days act as a kind of signal to stop laying.  The chances are Bim would stop laying and so might recover once any infection was treated.

The good news is that the swelling has gone again.  Bim has not had any garlic or natural supplements for a couple of weeks because she is now kind of wary of being caught again.  We are hoping that with the days shortening and her age, there will either be no more attempted laying for a while, or just sporadic attempts.  If she leaves enough time between eggs, then she should be able to reabsorb the internally laid yolk.

Nevertheless, she has survived much longer than predicted and we are now hopeful she’ll now make it through the winter.  After that, there’s a good chance she’ll be old enough not to lay any more and then could survive gracefully into old age.  Fingers crossed.