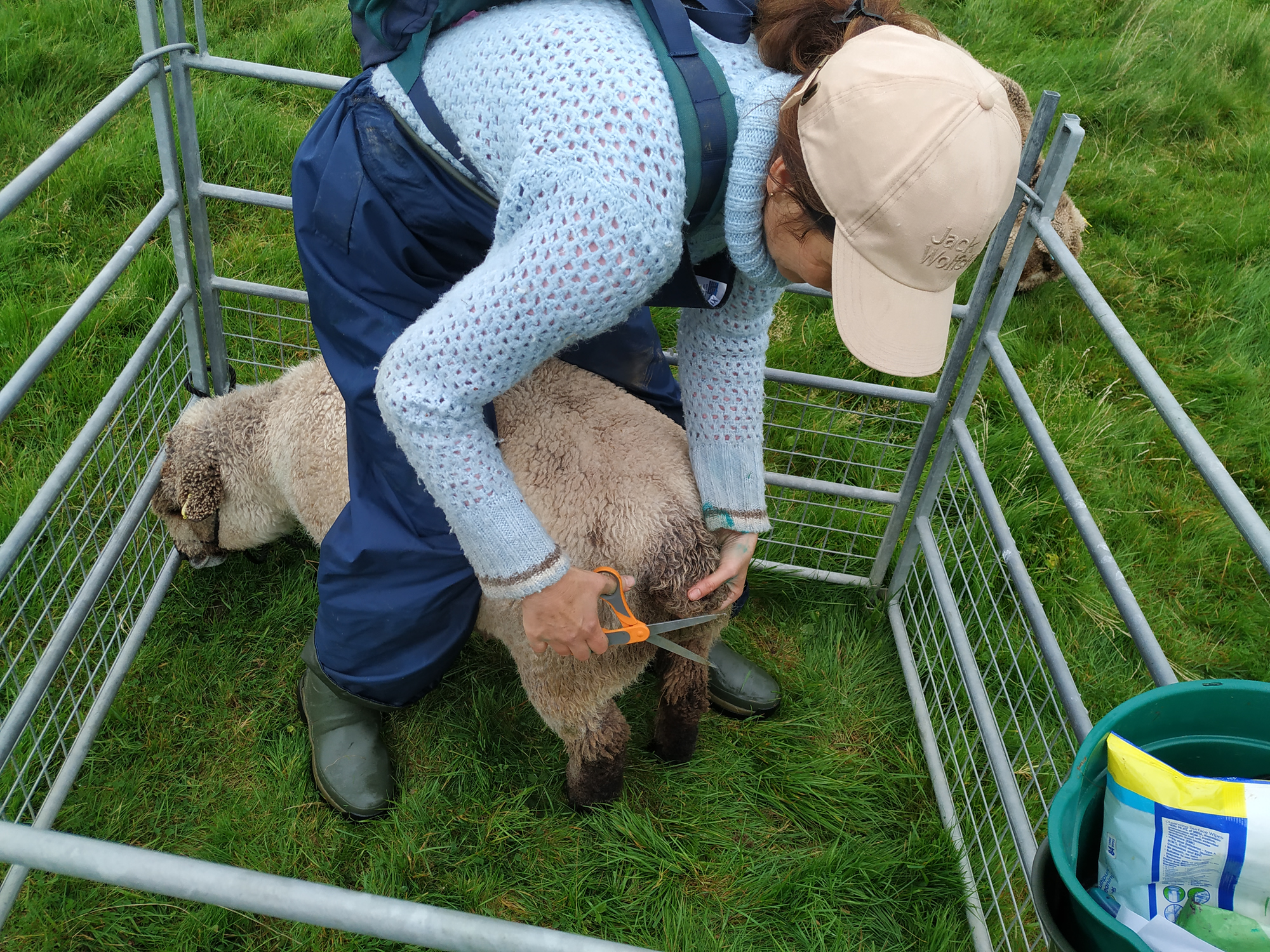 I should mention at this point, back in the olden days when we first had sheep, the days leading up to doing the MOTs would cause me palpitations, (not Adrian, he is the laid back sort rather irritatingly).

Just getting our sheep into a pen, let alone doing all the necessary tasks could be fraught with disaster.  In fact it was due to many mishaps; sheep refusing to be penned up, us chasing sheep around the paddock, our inability to “tip” them once we had got them into a pen, us being stood on by sheep, us ending up flattened by a sheep, the list goes on … but anyway, all these set backs did have a positive outcome, it made us quickly rethink our sheep handling strategy.

One frosty day whilst nursing a squashed toe after being stood on yet again by one of our larger ladies I had a rare light bulb moment.  I remembered how our mentors were always leading their sheep around with halters.  They are great show enthusiasts so had trained their flock to be halter trained.  I wondered if we could do the same and so make life easier for ourselves when it came to doing their health checks.  We weren’t interested in showing our sheep, but the idea of a docile sheep trotting after us on a lead rope seemed very appealing not to mention practical.  I particularly like the idea of not having to “tip” a sheep again (it’s nigh on impossible unless you have cracked the technique and I clearly hadn’t).  The vision I had in my mind was to be able to work on the sheep whilst it was standing up, tied to a railing by a lead rope rather like a horse.

A training plan started to form in my mind based on a mixture of Cesar Millan’s and Monty Robert’s “whispering” approach.  I would use psychology, patience and bribery in the form of sheep nuts.

I ordered some halters and as soon as they arrived I got to work.  I set up a largish pen in the paddock with a smaller pen inside, filled my pockets with nuts and off I went.

It took me a while (about a week) to complete “phase one” for the sheep to start coming to me and letting me put the halter on.  The next thing I did was gently walk them around the pen (phase two).  If they got spooked I let go of the halter.  If they didn’t I led them into the smaller pen.  Several weeks of training later and little by little I managed to get each and every one of our sheep (nine to be precise) used to the halter, and eventually I was able to tie them up in the smaller pen and actually do some work on them, hurrah!!  It was a huge turning point for us in our sheep management because now our sheep were “tame”, they trusted us and so we felt a huge weight had been taken off our shoulders.

If we needed the vet we no longer worried about having to chase a sheep around just to get it into a pen, if we needed to move them to another field we simply haltered them or better still, called them and they followed us.  Rounding up our flock became a pleasant and fun thing to do instead of anxiety provoking and as a result our flock became relaxed whenever we were around them.  We were happier and so were our flock.  And the best part of the “training” programme was that we got to know our sheep as individuals with unique personalities.  We noticed that Sparkle makes funny grunty noises when happy or excited, we noticed that Selene has a particular tickle spot on her back, we noticed that Sarka was very shy and timid and needed extra time to learn to trust us.  We learned so much that winter, and mostly (I personally) learnt the art of patience (something hubs claims he’s yet to witness).

So, fast forward a few years, and after doing hundreds of MOTs, the three monthly ritual is a doddle compared to those early days.  That said, it is physically hard work and very time consuming.  Admittedly not helped by us expanding our flock somewhat.

So sometimes I have a little dream about owning a “Combi clamp”.  This is a gentle device for restraining a sheep and allows you to all those things that you need to do to: dose, inject, trim hooves, dag etc.  Although our sheep are easy as pie to handle, there is one thing I still struggle with; inspecting the back hooves.  I can trim bottoms till the cows come home, I can get stuck into the front hooves, but for some reason the back hooves are really tricky to do.  The sheep go into full on reflex mode when I so much as go near those hooves, to say they are not keen would be an understatement, they make it plain that it is the most irritating thing in the world.  I usually end up half underneath the sheep, resting their knee on my thigh and doing whatever needs doing between the hoof flicking out randomly and usually narrowly missing my nose.  As the sheep is only loosely restrained by the halter it can start to hop around a bit or worse, pull back towards me at which point I end up with a sheep’s bottom on top of my head.  Not a great experience all round and quite frustrating for both of us.  I’ve usually resorted to filling a bucket with carrots and letting them munch away while I quickly work on them but this is not ideal as I don’t always have carrots and I’m not keen on using treats as it makes the sheep hyper and they come to expect it and so become anxious, you have to be careful with how you use treats.

Sadly Combi clamps are over £3,000 so that dream will remain a dream for the time being, meanwhile Adrian has offered to be my Combi clamp.  He makes a good one, he has a patented technique for keeping a sheep in exactly the right position while I can do their back hooves with ease. It is almost a blissful experience for all of us.  Part of the “Adrian technique” is to hug the sheep (so “clamping” it) whilst giving it a back scratch in just the right spot.  At this point they go into a kind of trance and start to gaze off into the distance, stretching their necks out and licking their lips.  I am happy because I can work on their hooves and no longer risk being decapitated, but Adrian is probably happiest of all because he hasn’t got to fork out £3,000 for a Combi clamp, well not for the moment anyway!