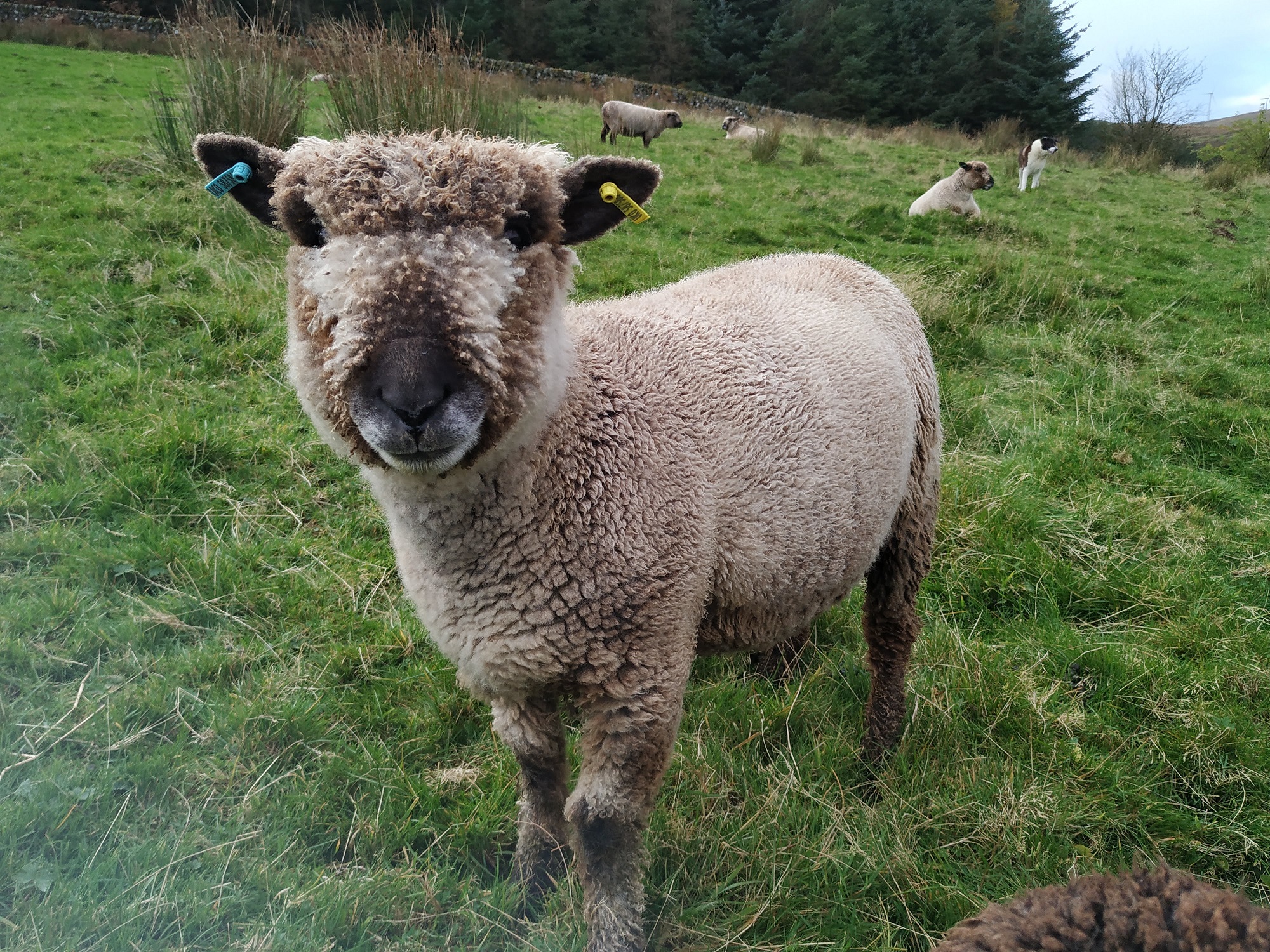 Every so often sheep get into pickles.  In fact, they’re probably more prone to pickles than other farm animals.

We didn’t know this until we became the proud owners of our first three sheep, Blumes, Thelma and Louise, and then the comments started; “where there’s livestock there’s deadstock”, or “did you know that sheep spend their entire lives looking for ways to die”.

“Oh” we thought disappointedly, “why are people not happy for us, proud new sheep parents?  Why the doom and gloom?  What can be so hard about keeping sheep?  Surely you just put them in a field and keep an eye on them from time to time?”  However, as with most (if not all!) our experiences in our smallholder life, we were soon to find out the hard way.

Our first lesson came to us about 18 months in to keeping sheep.  By this time we had 12 woolly friends grazing away happily in our fields.  It was late summer and we were moving the flock into a different field.  As the sheep gambolled into the new paddock to investigate the fresh grass we noticed one of the flock, Sarka, was acting out of character.  She seemed spooked and jittery.  We watched her for a short while and decided we would need to pen her up and inspect her as something was clearly wrong.  So we penned her up and had a good look.  It didn’t take us long to discover to our horror and dismay, that under her tail were hundreds of wriggling and writhing white maggots.  “Flystrike” we both said in unison!  Closely followed by an expletive or two.  It was truly a horrific sight.  It was also something we’d been warned about and we had sprayed our flock earlier in the summer to prevent.  We rushed indoors to get the bottle of “Crovect” which kills maggots and thankfully Sarka was soon grazing away happily, cleaned up and at peace with the world again.

The following year we had three more incidents of flystrike and fortunately we caught each attack in time.  If left for too long the sheep will quickly “fulfil their life’s ambition”.  And “too long” can be only a matter of days – two or three after the maggots hatch and start burrowing into the flesh.  Even using the recommended sprays and checking sheep for the tell-tale signs (agitation, foot stamping etc) it is still possible for a blowfly to slip through the net and lay her eggs in the wool.

“Hmm” we thought, “perhaps these people have a point, sheep are not the easy maintenance creatures we thought they were.”  By now we saw ourselves saying goodbye to ever going on holiday again.

But fate was kind to us and dealt us a lucky hand.  Two years into owning sheep and having outgrown our Somerset smallholding we decided to up sticks and move to South West Scotland to a much bigger place.  This is where we live now, with many more woolly friends than we started out with.

The lucky hand of fate came in the form of hill breezes.  Blowfly like to lurk in warm and sheltered hedgerows.  They cannot abide a hill breeze, least of all a Scottish one which has a freshness about it, and they don’t care much for dry stone walls either which have no lurking potential, and we have plenty of drystone walls here, not a hedgerow in sight.  The result being that life here is blissful, chilly Scottish breezes are absolutely fine as far as I’m concerned and flystrike has happily become a thing of the past.  We don’t even spray our sheep now which is great because we don’t like chemicals.

But don’t rest on your laurels I hear you say and you would be right.  We were soon to be presented with another interesting learning experience.

One summer’s afternoon, during our first year on our Scottish smallholding I was doing the afternoon sheep check which involves counting them and scanning the flock for any unusual behaviour.  It also involves mooching around the flock giving them pats and head scratches.  So there I was happily wandering amongst the woollies when I noticed Sky looking rather strange.  She was lying down, but something seemed wrong.  On closer inspection I could see she was stuck.  “Oh no!” I said out loud, “she’s cast!”  I wondered how long she had been there as I turned her over and helped her to her feet.  Sky seemed none the worse for wear but her wool was quite flattened on the side she’d been lying on so I thought she must have been there a good while.  Sky was lucky I’d found her when I did as a cast sheep soon becomes prey for crows.  I didn’t like to think too much about that, but it was a sobering thought and my heart was heavy as I trudged back to the house to tell Adrian what had happened.

Luckily the incident remained a one off and we found no more sheep lying on their backs with their legs in the air, with the exception of once, close to lambing time, we found Star, heavily pregnant stuck on her side and unable to get up, but that was understandable as she was huge at the time.  Still, it was just as worrying as the first time round, and so we added “cast sheep” to our string of worry beads.

Two years on, and we had no more cast sheep.  “Yippee” we thought, but we knew by this time not to tempt fate and so kept our eyes peeled just in case.

And just as well as Adrian was soon to find out.

One spring morning earlier this year, Adrian was out fixing one of our numerous dry stone walls.  See “Stone Dykes” This particular wall was a boundary wall so it was important to get it fixed.  There was lots of to-ing and fro-ing on the quad bike with rocks and tools etc, and the way up to the wall was through the sheep.  On one of these journeys Adrian happened to spot Yarr, looking a bit funny.  Yarr is one of our boys, he’s a friendly chap always happy to come up for a chat and a pat.  Adrian instinctively knew there was something odd about him, he was lying on his side in amongst the other sheep, but seemed to be in an unnatural position.  He whizzed over, and was shocked to realise that Yarr was stuck, he was lying there helpless, his legs in the air like a beetle.  Adrian quickly turned him over and rubbed his legs to bring back his circulation.  Yarr seemed to be not quite himself for the rest of the day, however by the next day he was fine again.  “Phew” we thought what a stroke of luck that the wall had needed fixing and Adrian had found him when he did.  We check on the sheep three times a day but Adrian had found Yarr in between checks so poor Yarr would have been stuck a while longer if it hadn’t been for the work on the wall.

We thought no more about it, until two days later to be precise, Adrian was once more whizzing up on the quad to continue work on the wall when he spotted Yarr, on his back again! They say bad luck happens in threes so while helping Yarr back on his feet Adrian started wondering what else was going to go wrong.  Meanwhile I was wondering what was wrong with Yarr and why he kept ending up on his back.

It occurred to us later that day over a cup of tea that the sheep had very shaggy fleeces, it was early May and they had a full year’s worth of wool on their backs.   They were due to be sheared later that month so we hoped that once relieved of their heavy fleeces Yarr, or indeed any other sheep wouldn’t end up on their backs for a wee while at least!

And this proved to be so, without their heavy fleeces, Yarr and the rest of the gang stayed out of pickles and we were relieved.

Until last weekend that is.  I was doing the evening check, the flock was grazing contentedly in the lower hay field and all was well with the world.  I counted 20 sheep, all were present and correct.  I then noticed Yarr looked a bit strange.  “Oh no” I thought, “not again!”  I ran over to him as he was very still, he looked like a ragdoll, like sheep who has given up.  On nearing him I was hugely relieved to find him alive, but yes, once again, cast.  I righted him and rubbed his flanks. He stood for a while and did a pee.  I wondered if he’d been holding it in as it seemed to go on for ever.  After a few minutes he shook himself and wandered off to graze with the others.

We hope Yarr has had his run of bad luck now.  He’s been found on his back three times, but on the other hand you could say Yarr was lucky, lucky to be found in time and not left to fulfil his life’s ambition.