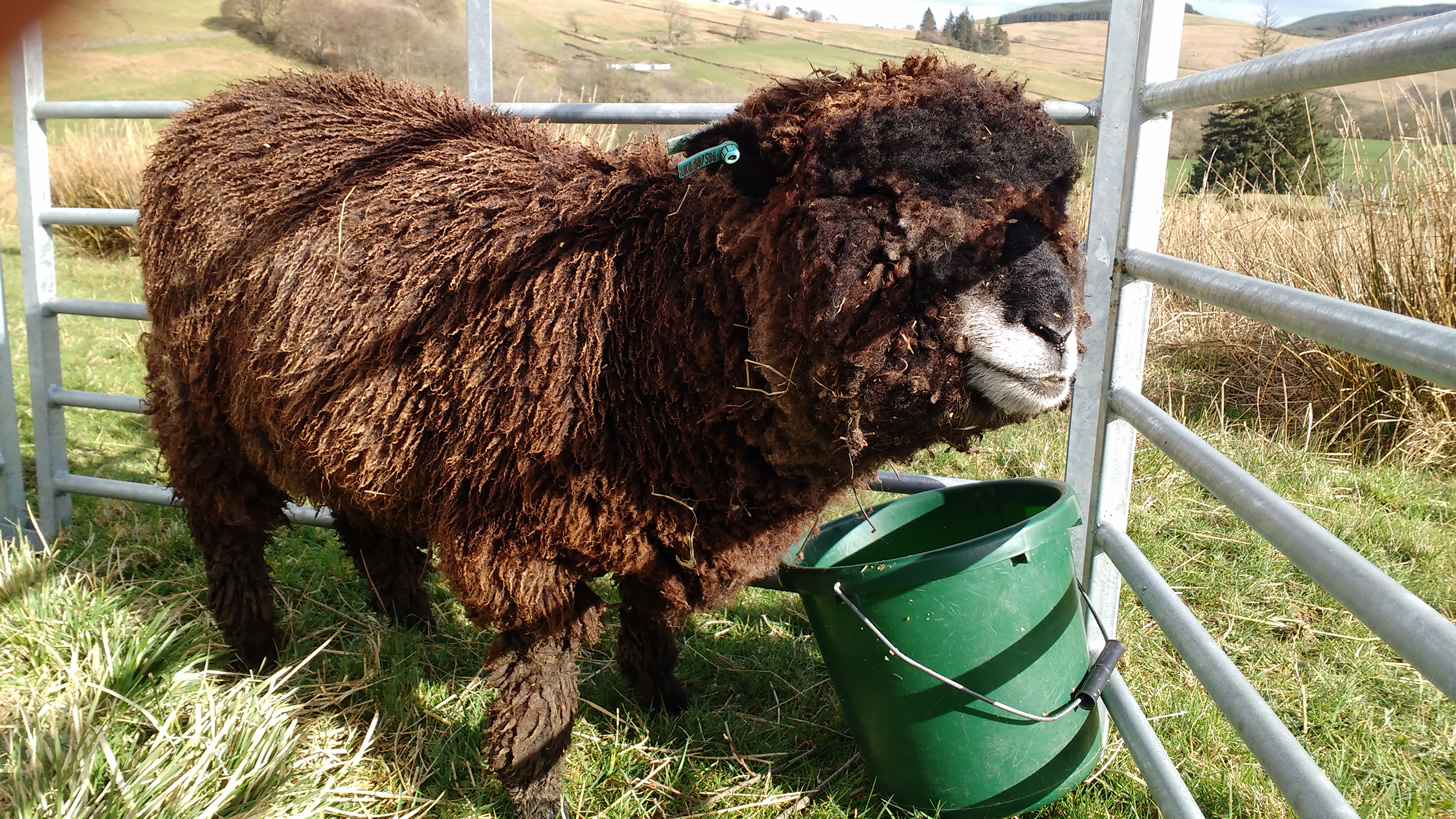 Last Friday morning, Nicole noticed that Ymogen, one of last years lambs, had a problem with her jaw. The lower palette seemed to be all askew. We called out the vet and she confirmed it was a bad break. When an animal is in mortal peril, vets kind of have this look on their face, and our vet had that look. The prognosis was not good.

We are not sure how it happened, but we suspect she had put her head into a gap in the hurdles and then been hit from behind by another sheep. We had been doing routine vaccinations the day before and sometimes had been using sheep nuts to lure them into a pen. She may have been trying to reach the sheep nuts through the hurdles. Sheep nuts are both a blessing and a curse. You can use them to train sheep (like dogs and dog treats). But the possibility of getting sheep nuts can cause a little but too excitement. And for some of the sheep, their way of saying “give us a bit of space” is to jump onto the rear end of the poor sheep that’s in the way.

Anyway, the vet gave her a painkiller and some antibiotics and we retired to ponder what to do.

Inspiration came via one of our neighbours. She keeps guinea pigs and offered us some chopped hay. Well, we have a shed full of the stuff and plenty pairs of scissors, so we got to work. I say “we”, but in reality, Nicole created a masterpiece of a meal for injured lambs, a mix of chopped hay, grass, brussel sprouts, a bit of liquid life aid and the key ingredient, shredded turnip (swedes to non Scots). Luckily for us, we have grown loads more turnips than we can eat.

For the first couple of days, Ymogen licked some of it up. However, she kept trying to eat grass or hay from the feeders and when she couldn’t, she would just go and stand somewhere with her head down. It’s kind of heartbreaking to watch.

Anyway, come Monday, Nicole was off to work. Mid morning, I set off with a few handfuls of “magic mix”. Ymogen was still a bit wary of coming into a pen, so it was not that easy. She needed to be in a pen to keep the other sheep out more than anything. In order to tempt her to eat the mix, we sprinkle some ground sheep nuts on the top. The smell attracts a lot of unwanted attention from the others.

I couldn’t quite get her into the pen, so I started feeding her with her standing half in, half out. I was able to keep the others at bay and they soon lost interest. Amazingly, she scoffed the lot and then looked at me, like Dickens’ Oliver, and asked for more.

So I sent an update to Nicole (with freezing fingers) and trotted back to the house to make a second helping. She scoffed all of that too.

It has now been just under a week. Ymogen is not out of the woods by any means. The injury is to bone and cartilage so could take weeks to heal. At least Ymogen has the advantage of being young (about 10 months old). She is on 5 feeds a day now. She is often waiting by the pen and now trots happily in. She happily eats from a bucket (making a it easier on us). She is cudding which is a great sign.

She is still on her medication, antibiotics and painkiller jags (jabs to non Scots), every 2-3 days.