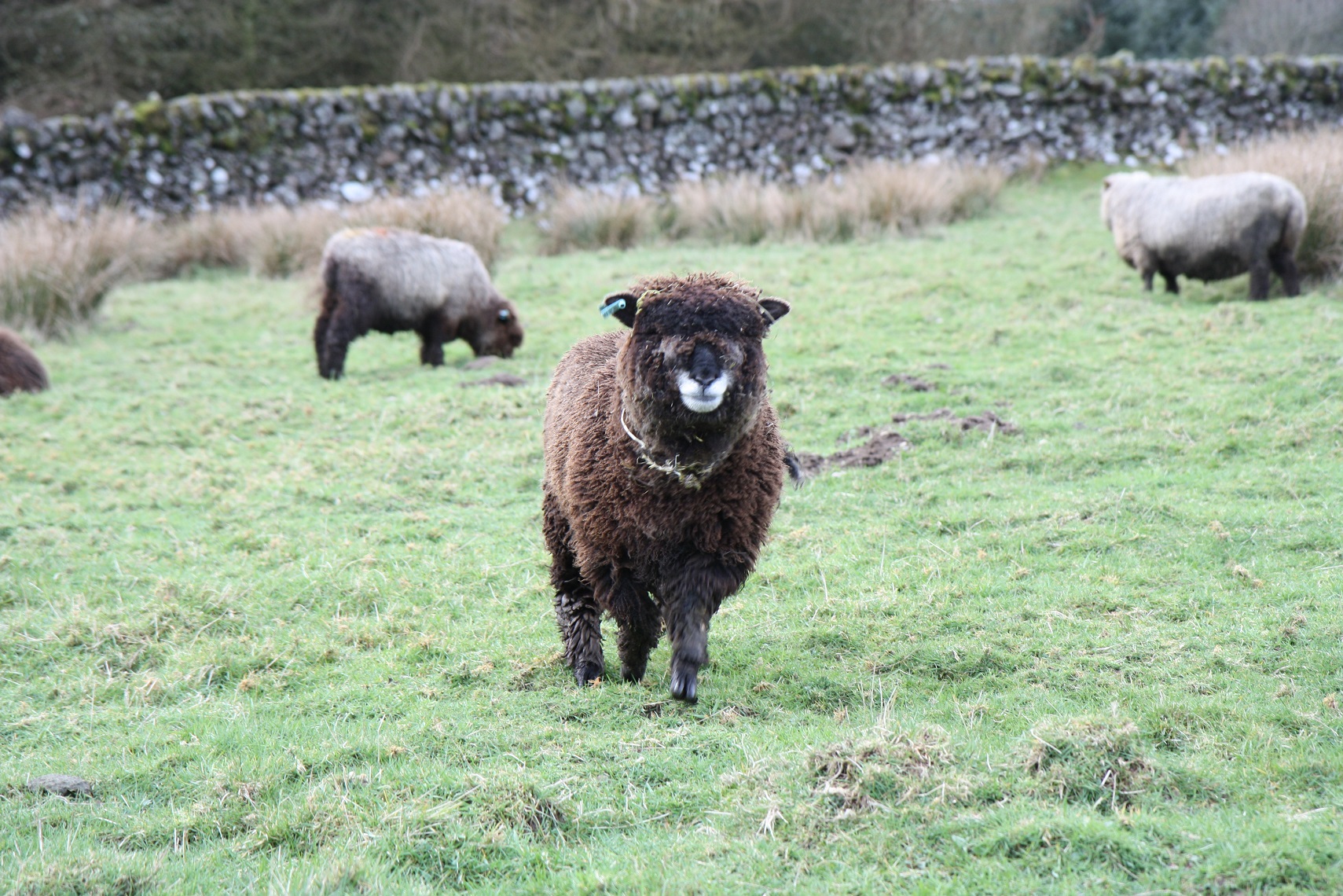 I’m Ymogen. I was born in April last year to Sparkle, along with my sister Yndia. Life here at Auchenstroan has been good. We have plenty to eat, there are lots of handy drinking spots and a nice wee shelter for when the weather gets grim. And it does get pretty grim sometimes.

So life has been great, only about two weeks ago, I had a bad accident. I can’t remember much about it really, all a bit of a blur. But I do know that I really hurt my jaw. In fact, the front bottom bit went all flappy so I couldn’t even eat anything.

I did try, but I couldn’t get hold of hay, even the long bits. And nibbling grass, well that was nigh on impossible.

The humans, bless them, spotted that I was in trouble very quickly. I was given some nuts to eat and I managed to lick those from the she-human’s hand. They were very welcome, let me tell you as I was getting pretty hungry. But she only gave me a few, I couldn’t figure out why.

Then the humans disappeared and I lay down in the shelter. It’s hard when things hurt.

Then the humans re-appeared and had a stranger with them. I kind of recognised her, I think she had been around before, but I wasn’t sure. Turns out she was what the humans call a vet. We’re a bit wary of vets, they have a habit of sticking sharp, prickly things into us. Sure enough, this vet looked all round my mouth (ouch) and then stuck a prickly thing into me. Twice!!

I watched the humans, a bit warily now. The vet had a funny look on her face, it didn’t look very good. She kept looking at me like I was in real danger. Well, I suppose if I can’t eat, I am in in trouble I thought to myself. I had heard that some humans thought that sheep just spent their time looking for ways to die. Not me, I thought, but what am I going to do?

The humans wandered off but then my two re-appeared soon after with a green bucket. Hmm, I thought, green buckets can mean nuts. The she-woman tried to lure me into a pen. I wasn’t too sure about that, I hadn’t forgotten the prickly pains. But the lure of sheep nuts was strong and so in I went. Then the she woman presented me with a handful of something I’d never seen before. I didn’t know what to make of it at all. The human was muttering words like “turnip” and “finely chopped hay” as if us sheep could speak human. What was she on about?

But she sprinkled some nuts on top and I did my best to lick them off. Some of the strange stuff got into my mouth, it was all shredded and felt a bit odd. Tasted all right though. But I wasn’t sure about it, what I wanted was hay and grass.

Anyway, the humans came over lots of times and each time they offered me the same mix. And I licked a tiny bit but I wasn’t really too sure about it.

After a couple of days I was really quite hungry. The humans had given me more prickly things and the the funny thing is, my mouth didn’t seem to hurt so much. The she-woman had vanished, not sure where she had gone, but the he-human came up into the field (we were out and about now) and tried to lure me into the pen. Well, I wasn’t too sure about him, but when I was half in half out, he offered me the same strange mix with some nuts on top.

I was really hungry, so I started to lick it up. It was pretty good actually. It helped that my mouth was not so sore. My back teeth were OK, but I couldn’t seem to get my nibbly teeth at the front to work.

Anyway, I kept licking and the he-man kept adding more in his hand, then he left. I looked at him, how can you leave – I’m starving, I want more. But off he went. These humans, I thought to myself, I wish they spoke sheep.

But, amazingly, he was back soon after and had more food. I licked it all up and he seemed really pleased.

Over the next couple of days, the he-human brought me lots of food and I ate every scrap. I soon realised that the pen was not to imprison me, but to keep my pesky brothers and sisters out of the way. Not to mention some of the wrinklies – they could dive right in, and my mouth was still a bit sensitive. But the he-human kept me safe. I started waiting by the pen.

A couple of days later, the she-human re-appeared and she brought me new food. I heard her say “carrot” and “sprout”. It was an odd colour, the mix, kind of orangy, but it was yummy.

In-between the visits from the humans, I kept trying to grab hay from the feeders and to nibble grass, but I just couldn’t seem to do it. It was so frustrating. I wasn’t hungry though, the humans brought me as much food as I could eat. And I could chew the cud.

Phew, I would say to myself. One day, my meal was spread right over the hill as the others were on a right long walk. The human didn’t seem to mind, he just let me eat a bit, called me, we’d catch up, eat a bit and so on.

Anyway, after a few days of this, maybe about 11, I found I could grab hay from the feeders. That was great. In fact I was so excited I hardly ate anything the humans brought that day. The humans looked a bit non-plussed so I ate the evening meal to keep them happy. My jaw was a bit achy now, though. It occured to me I hadn’t had a prickly experience for a few days. Ha! That didn’t last. Next morning, head in the bucket and ouch, pin-prick. Still, my jaw started to hurt less.

Anyway, the she-human brought some hay into the pen. After I’d scoffed the shreddy stuff, I tucked into the hay. The human seemed very excited by this, can’t think why. But it was a lot easier eating it like this than at the feeders where there was always a bit of argy bargy going. We sheep, we’re always arguing about the same piece of hay.

Next day, I tried nibbling some grass again and you know what, I could do it. The she-woman was so excited that I think she filmed me doing it. Can’t think why, it’s what we sheep do, all day, every day. But it was nice to taste real grass again.

The elders tell me I’m lucky, that there was no grass around this time last year, Apparently, the weather was dodgy last year. Dodgy? The last two weeks have been nothing but snow, hail, torrential rain and high winds.

Anyway, the humans don’t come out with shreddy meals quite so often now. Probably just as well or I could turn into a right porky like my mum. I know I shouldn’t say that, but really, have you ever watched her walking downhill?

Anyway, I just hope my humans have told the vet-stranger that I am still here. I’ll bet she will be well surprised, init.