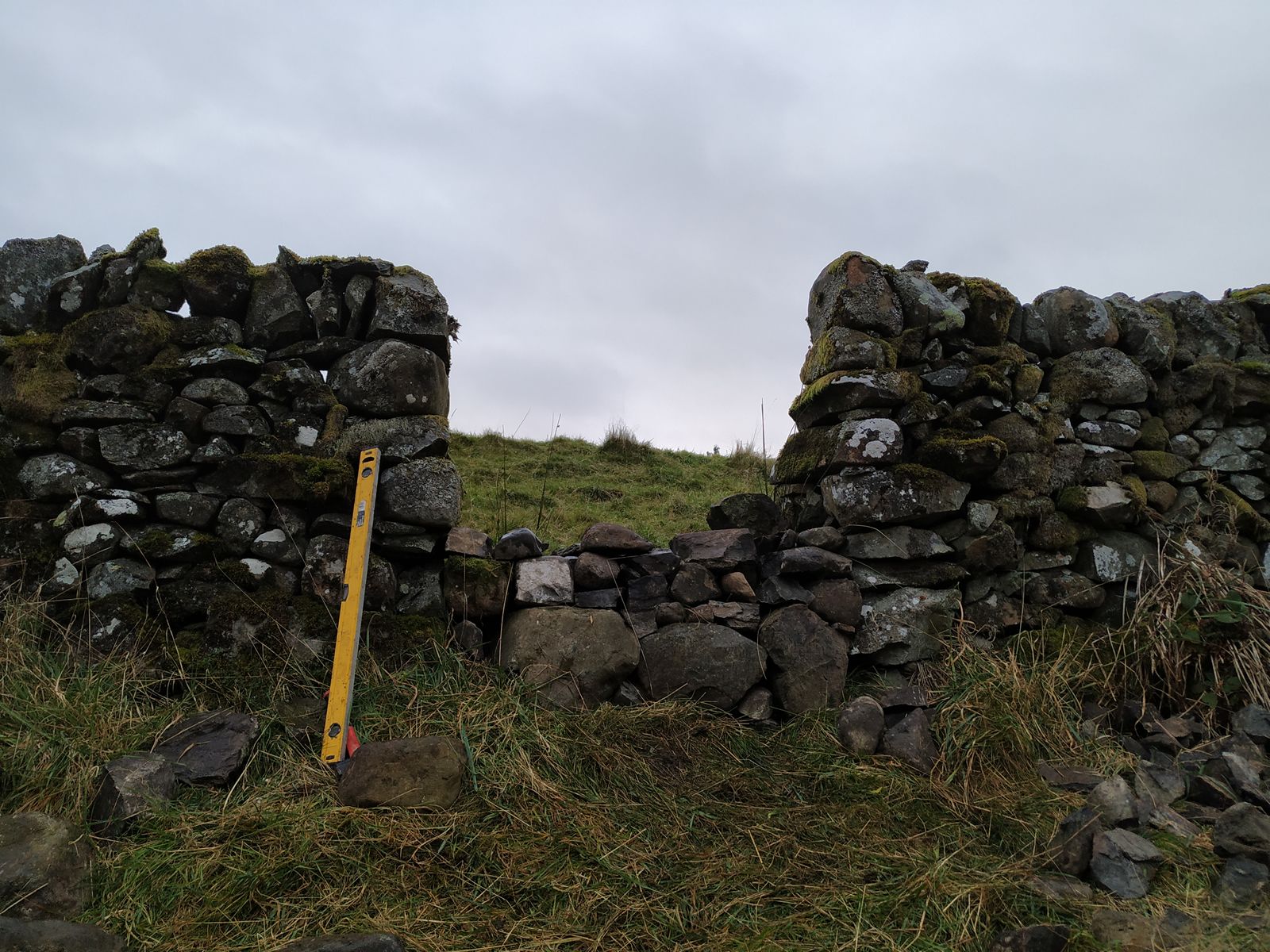 We have a lot of stone dykes here and over the years, some have fallen into disrepair while others have been, shall we say, modified.

One such modification was a gate fitted in between two fields.  While this gate might have made sense when all the fields were part of this farm, over the years bits have been sold off and the gate now sits between ours and a neighbour’s field.  In fact, it had become kind of a gate to nowhere.

The problem is that the gate was rotten and the gentlest of nudges would have pushed it down.  Not a problem until you have rams in one field an ewes next door (see “hello boys“).  We could have replaced the gate, but there was not much point.  There is already a proper farm gate about 50m away, so there is access between the fields.

So, the decision was made to ditch the gate and rebuild the wall.  The only problem was all the stones that had formed this part of the wall had long gone.

We had recently been give a pile of stones from a house in town where they are renovating house and garden.  However, there were not enough even for this small gap.  Also, they were all pretty small, not ideal for dry stone dykes.  Off I went in search of some more, larger stones.  I found a few and ferried them over with the quad bike.  The wall itself was up a bank, probably around 1.5m (5ft) high.  I had to get all the stones I needed up this bank.

It was easy for the small stones, I just lobbed them up.  The larger ones were a bit trickier.  One in particular proved nigh on impossible to get up.  After three attempts had resulted in me losing my grip and having to jump out of the way, I named the stome Sisyphus and sat down to ponder.  I could have gone and got the tractor and lifed it with the front loader, but in the end, I rolled it up the track, got it up onto the bank where it was lower and rolled it back again.  Of course, having done that, I realised I could have just put it on the quad bike and drive in it round to the other side. Doh!

Having got all the stones ready, I retired for a cup of tea and a rest much to the gratitiude of the dogs who were, by now, pretty bored watching me moving stones.

Next morning, under the not so watchful eye of the dogs, I rebuilt the wall.  You can see Sysiphus bottom left (under the very white stone).  They never look quite so big once they are in place.

The small stones turned out to be a pain, so I had to scrounge a few more stones.  Luckily, there are a few just lying around.

We are pretty pleased with that little job.

Still plenty of stone dykes to repair though.