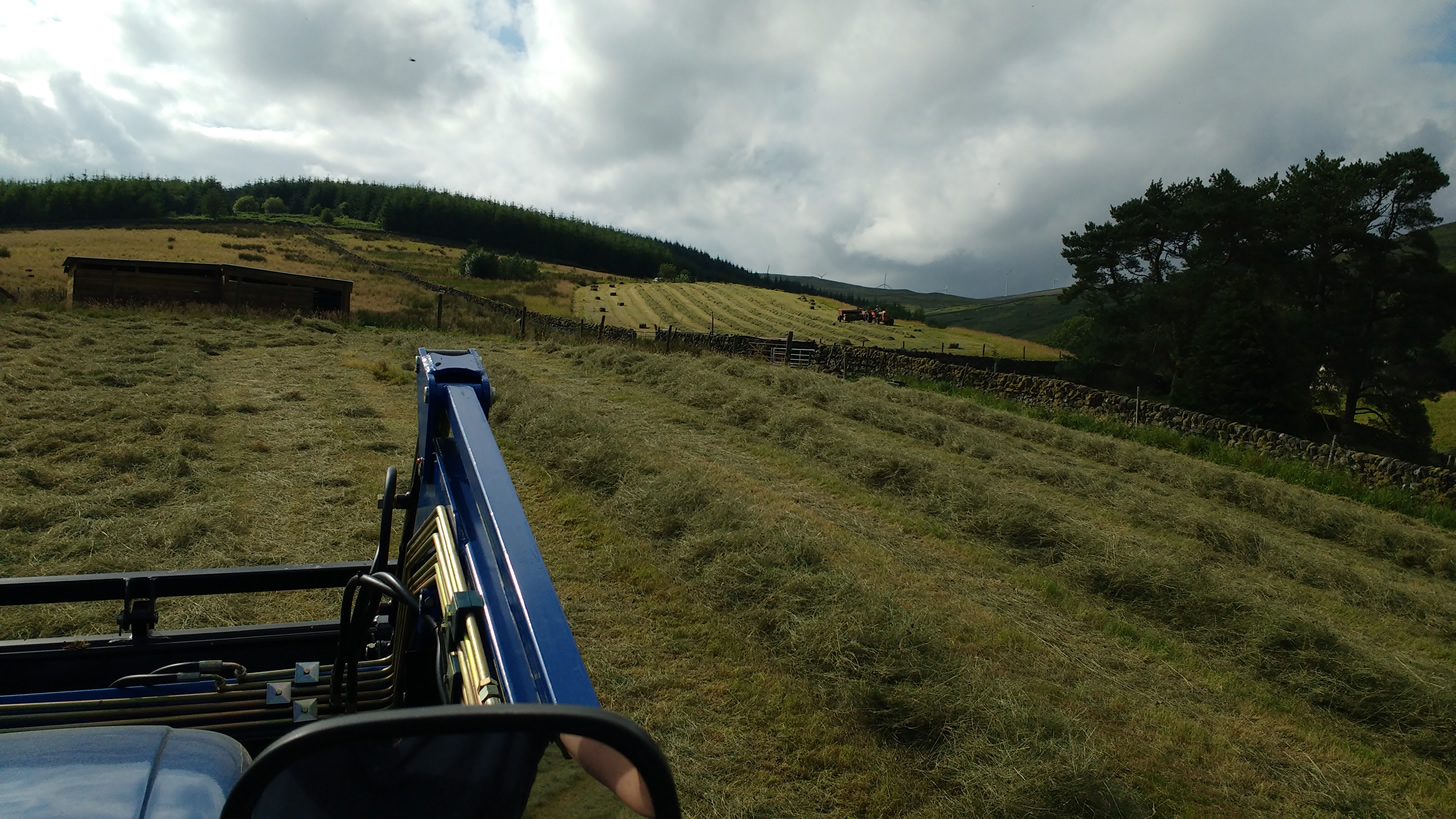 Although much of our land here is woodland and wild, we still have a fair amount of pasture and that means a lot of grass.  Too much for our small band of sheep.  So, we thought we’d make hay this year.  Small bale hay is getting harder to get hold of and is quite expensive round here.  Luckily, one of our neighbours has the correct mower and baler and we have a hay bob.

Planning when to do this in SW Scotland is easier said than done.  Continuous sunny weather is not that common.  Having missed one window, the forecast was looking good for this week with clear days showing from Sunday onwards.  So, we booked him in to cut the hay on Monday.  Of course on Sunday, the forecast changed to show heavy rain on Wednesday.  But we decided to go ahead, the forecast is always changing here.

Monday was a glorious sunny day, perfect for making hay.  Our neighbour with tractor and mower arrived and once everything was set up (our second hand hay bob proving a bit troublesome), off we went.

The rows in the first field were soon cut and I was off, tedding for the first time in my life!  I soon had the knack of getting the hay bob at the right angle – too low and it starts churning up the ground, too high and it misses the grass.  The first time is easy as the rows are clearly delineated.  It gets harder after that as the grass spreads wider.  Also, as the grass gets drier and fluffier and the wind picks up, it can drift all over the place.

Nevertheless, over the course of the rest of the day I managed to turn the hay three times, not helped by a wheel coming off the hay bob mid way through the afternoon.  Not the best second hand purchase I have ever made.

Next day’s forecast was cloudy and sure enough, Tuesday morning was overcast and misty.  The dew didn’t lift till well after eleven.  So, it was not till early afternoon that I could get out and carry on.  With the heavy rain forecast for Wednesday, the clock was ticking.  And now the forecast was saying rain every day till the following Monday.  What happened to the dry week that had been forecast only a few days ago?

Well I got it all turned and then ran into further trouble with the hay bob, moving the hines to rowing up position was really hard.  It took two of us, a large hammer and copious amounts of WD40 but we got there.

There is something very satisfying about rowing up, driving along and turning chaotic areas of grass into tidy rows ready for baling.  And I was quite pleased with my efforts, not bad for an amateur I thought.

It was even more satisfying watching the bales of hay emerge from the baler.  I have seen this before, I even worked on a farm in my teens and stacking bales was one of my jobs.  But when it’s your own crop, it’s special, especially the first time.

By now it was early evening and the next job was to gather all the bales in.  By now, Nicole had joined us after a full day of gardening for her clients.  We got to work, her with landrover and myself with the quad bike and trailer.

Having had only one day in the sun, the bales were quite heavy.  They were probably not quite dry enough, so we had to stack them loosely.  Each bale needed plenty of air.  So while our nice new hay shed and field hay store now have hay, they look a bit untidy.  We’ll probably leave it to dry for a few weeks before stacking it properly.  Can’t have it going mouldy after all that effort!

But around 8pm, we were finished, all the hay was under cover spread amongst various sheds.  We got a couple of cans of Guinness, got the dogs out and went over to inspect our work.  The dogs loved the newly cut area and were soon charging around.  We let the sheep into the other cut field and all 16 ewes were skipping and jumping.  There’s something special about seeing such happy animals.  Then back in for some bacon butties with good old fashioned Scottish rolls.