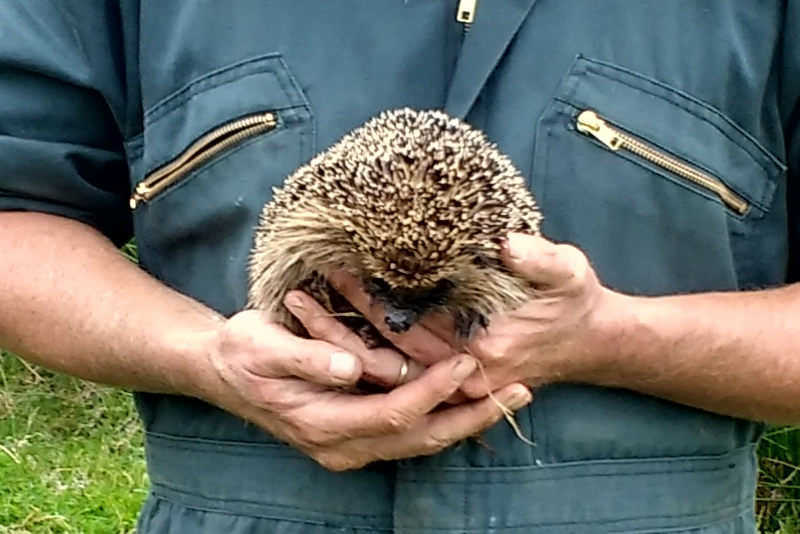 One of the things we have noticed is just how much wildlife we have around here compared to Somerset.  Perhaps that’s because it’s a bit wilder here, perhaps it’s because we have a lot of habitat for them here.  There are certainly more trees here.  Who knows?

The most noticeable difference is hedgehogs.  We have seen hedgehogs here more times in 4 months than in three and a half years in Somerset.  It’s great to see them and the one above wandered into the field in which I was building the sheep shelter.  And it was mid afternoon!

I know how to handle hedgehogs as many years ago, I used to overwinter the babies I found in November, the ones too small to survive.  Maybe I’ll find myself doing that here.

We are also privileged to have sand martins here.  At first I thought they were house martins, but then I saw them flying into their burrows.  That was the first time I had ever seen one.  We also have housemartins, they built their nest on the house and now have young.  Part of the nest crumbled away recently giving us sight of the fledglings.  Of course, we also have swallows nesting in the large shed.

Recently, the ground has been awash with baby frogs.  Some even managed to cross the chicken run, not quite sure how they managed that.  But it was be careful where you step for a few days.

And we have plenty of buzzards and one or two red kites patrolling, especially just after cutting the hay.  There’s lots of long grass here and mice and voles abound.

We see quite a few hares too.  Mildly ironic as Pitney, where we moved from, was supposed to be famous for its hares, but we never saw one there.

Surprisingly, we had a golden eagle in the valley not long ago.  It was around for a couple of days before moving on.  Quite majestic floating on the thermals.

I should also mention there’s a peregrine falcon just up the road, but we haven’t seen it yet.