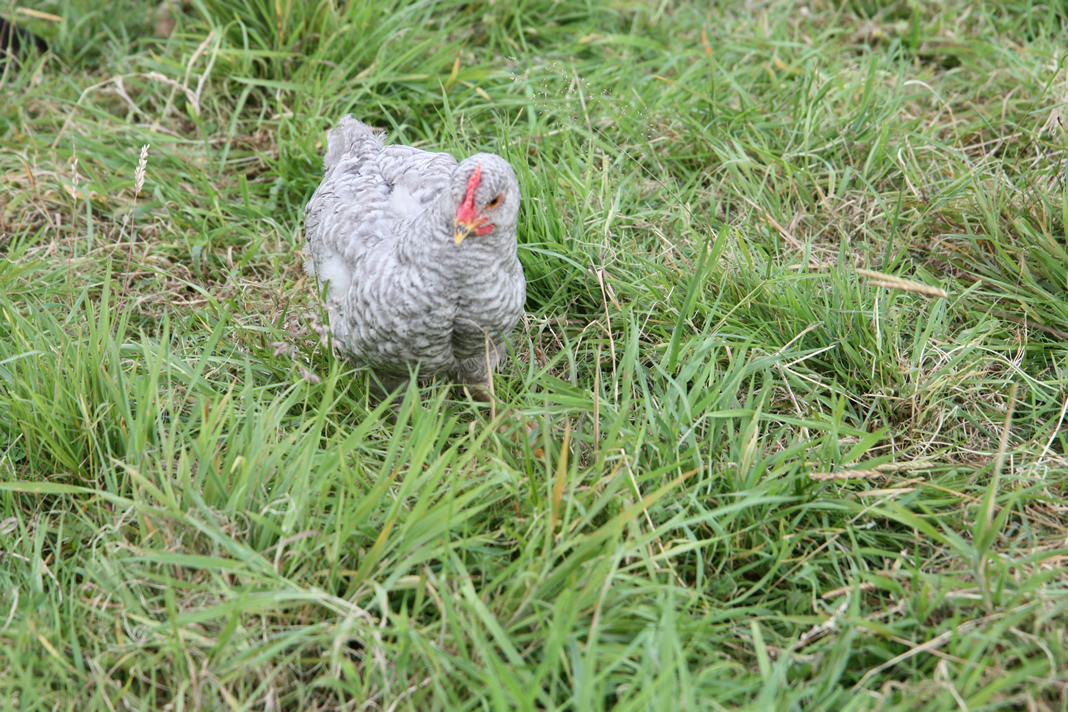 The sun is shining today, though there are plenty clouds around.  One of the things we have found here is that the weather is pretty variable and the forecasts also vary day to day.  This makes haymaking something of a lottery.

The day we chose to cut our hay was the second in what was forecast to be a few days of dry weather.  Of course, it rained two days later.  We got our hay in but it wasn’t quite ready, still a bit green.  It has been stacked loosely so that it can dry a bit more.  One field turned out to be drier and that hay is now stacked away.  However, the other bales soon heat up if stacked, so now they are leaning against each other with plenty of air circulating.

The new hay shed is looking good, though, we are very happy with that.

Our animals have been keeping us busy.  One of the pigs (Ant or Dec) went off her food and looked a little bit out of kilter.  Of course, it was the weekend and a long discussion regarding whether to call the vet ensued.  The pig keeping book, however, was quite adamant – if a pig is not eating, it’s not well.  So, on a rainsoaked Saturday evening under power shower rain, the three of us, in our wellies and waterproofs, tried to corner the afore-mentioned pig in what was now a sea of slippery, watery mud.  Of course, she had seemingly recovered and was equally intent on not being cornered.  Fortunately, she stopped for a breather and we carefully constructed a pen with sheep hurdles around her.  Diagnosis was possibly pneumonia, so a quick shot of antibiotics was administered.

Then the vet dropped his wee bombshell, she needed a five day course.  I say bombshell because, with sheep, it’s just the one injection and also we had never tried giving pigs a jag up till now.  So, next day, we caught her in a pen we constructed outside the pig arc and managed, without too much ado, to giver her second shot.  Day three, she was wise to this and in an instant sent the sheep hurdles flying.  No more jags!  Fortunately, she has recovered well.

Next up was Scarlett, one of our ewes.  She had taken to spending a lot of her time in the shelter.  After this went on for a few days, we started to suspect something was wrong.  We had already checked her over and she was alert, would get up and come over, but she was always in the shed.

So, she too was tempted into a pen (using sheep nuts). The fact that she was eating was a good sign.  We inspected her all over for maggots – nothing.  Not flystrike then.  We were puzzled and about to let her go when Nicole spotted her ear – basically, the area around her ear tag was infected.

So, we had to get the ear tag out.  This proved quite hard.  We wanted her not to suffer, but we couldn’t get cutters in to snip it.  Luckily, following Bluemli’s eye injection, we had purchased a headstock.  So we fetched that and secured Scarlett.  She could still move, but all we now had to do was control the head, not the whole sheep.  Using wire cutters, we snipped the main part of the tag away.  Then, while trying to get into the bit that went through the ear, Scarlett shook her had and out the tag popped.  That was a relief I can tell you.  So we administered iodine to clean the wound and an antibiotic in case the infection had spread.

She’s looking better, but still a bit attached to her shed!

Our 13 chickens are growing. We can’t believe that they have all survived.  Their mother, Mrs Mills, has basically been living rough for three months so they are not inside the safety of a hen house.  Plus, there are cats that live around and plenty of buzzards and kites.  On top of this, the chicks can still get out of the pen and wander far and wide including into cat territory.  We suspect the presence of George, our large dog, is acting as a cat deterrent.

Anyway, with a total of 22 hens now, we needed another hen house so one was duly purchased and erected (yesterday).  We also purchased the automatic door opener (they are really brilliant).  This one required calibration to set the light levels so the door opens and closes at the right times.  So, we were out last night amidst clouds of midges waiting for the light to fade.  We thought we’d calibrate it to close around the same level of light as our existing hen house.  Of course, being Scotland and a bit northerly, we have extended twilight, so it was a bit of a wait.  Midge nets became essential.

Finally at around 9:45, hen house one closed and we then calibrated hen house 2 to close at the same time.  Then, we rounded up Mrs Mills and her brood of 13.  This was fairly easy as Nicole had set up sheep hurdles and netting to surround their camp site.  All were safely transferred to their new home.  Then, it was up at 5 this morning to calibrate the opening light level.

We have bets as to whether Mrs Mills et al will use the hen house this evening or attempt to carry on camping :).

We have also got the new water system in and up and running.  All the fields now have water coming from a tank buried near the top of a hill.  It is fed by a small stream.  It only really fills up after heavy rainfall, but that’s fine.

It’s great not having to take 20 litre water containers over.  Plus, now, the troughs stay full making it easier for the animals to drink from them.

It was a big job, but the plumbing went in surprisingly well, no leaks, well none that I have found anyway. Just have to bury some of the blue pipe to keep it safe from animal hooves.

Our veggie patch and herb gardens are doing well.  Nicole has spent a lot of time keeping the weeds under control and nurturing our crop.  We are enjoying a steady stream of salad and veggies.  We are looking forward to the turnips ripening so we can enjoy them with some local haggis.

And, while all this is going on, we have been having some house renovations done.  Basically, we’re having two new bathrooms installed and the existing (downstairs) bathroom transformed into a large utility room with freezers etc.

We are starting to think we need a holiday.  But with so many animals, holidays are tricky to organise.

And finally, the housemartins have fledged – here they are shortly before they took off.  It’s amazing watching them all swooping and diving in the evenings.