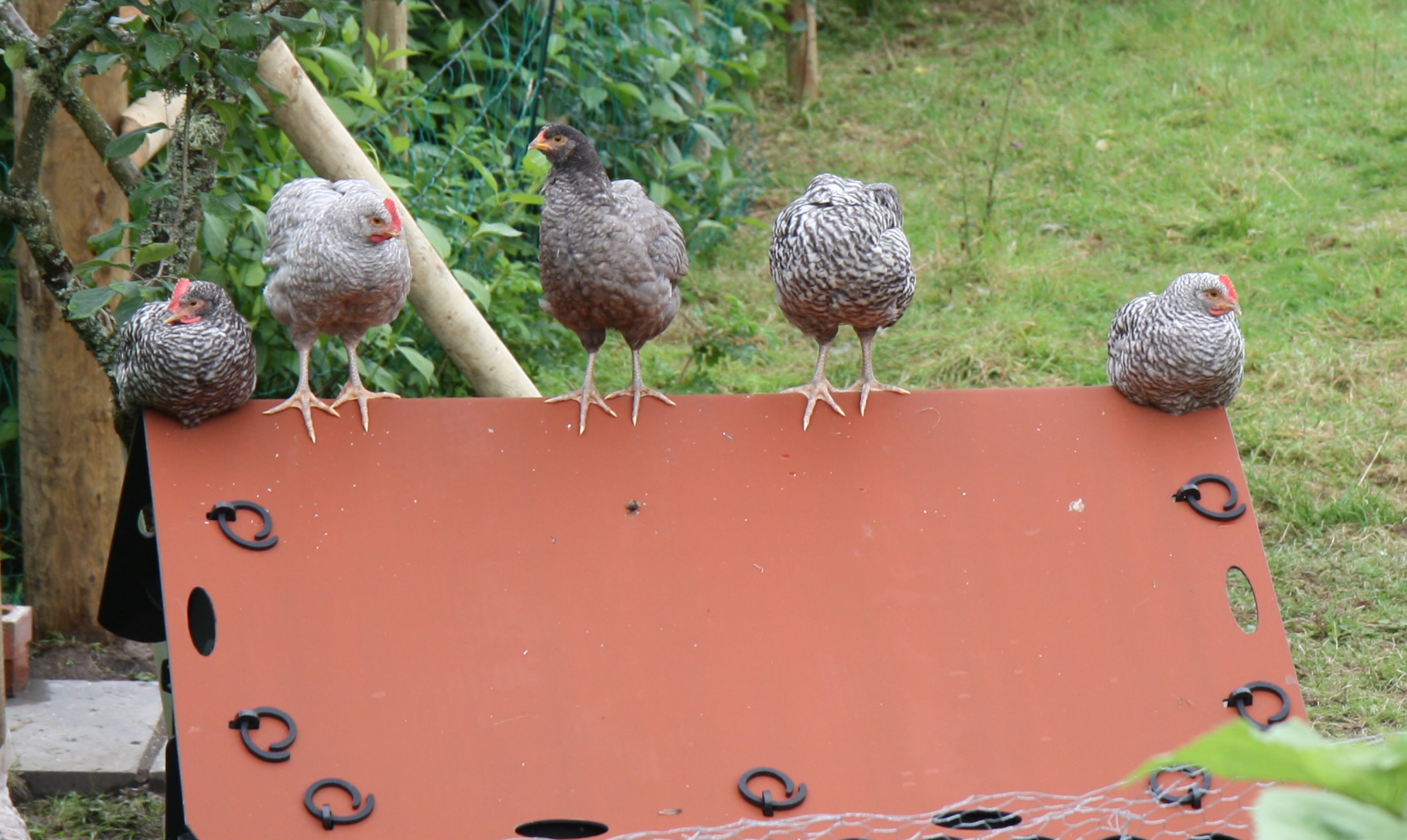 Readers of this blog might remember that a few weeks back, Mrs Mills went missing, turned out to be broody and hatched 13 chickens under a bush in the garden.

Well, miracles of miracles, all 13 are thriving and turning into proper little hens.  They, of course, go everywhere.  The netting around the runs does not contain them, nor does the stone dyke that borders a part of the run.  Truth be told, Mrs Mills is also partial to a bit of wall hopping herself.

The run border is in the process of being upgraded as it will double as a lamb paddock in the future.  But that’s another story.

One of the problems that arose from Mrs Mills and her family was that Mrs Mills had stopped using the hen house.  Now our hen house has a fox guard, namely it automatically opens and closes depending on light levels.  So, the hens are always safe at night.

Given our hen numbers have, thanked to Mrs Mills more than doubled, we purchases another hen house again with automatic door opener and closer.  We set it up close to Mrs Mills’ favourite nest spot.

She basically ignored it.

So, we hatched our plans.  We surrounded her nest area with sheep hurdles using chicken wire to cover any gaps.  We also set up netting above the nest.  We waited till nearly dark.  We stood in the midgie infested evening sun waiting for the old hen house door to close.  Once it did, we then calibrated the new hen house door so it too knew at what level of darkness to close.

We caught Mrs Mills and also her 13 chicks and stuffed the chicks in a box.  We transported them to their new home.

At 5, we were up again to calibrate the opening light levels.

So far so good.

Day 2. Mrs Mills and chicks returned to their old nest under the blackberry bush.  We tried to repeat day one’s exercise of catching the hens but they were not quite sleepy enough and within seconds, 6 chicks were up, gone and scattered around the garden.  We retired, defeated, and left them to it.

Day 3, we chopped down the blackberry bush and other vegetation.  We also netted off an area around the new hen house.  We enticed Mrs Mills with some tasty pasta bits and secured her into the area.  The chicks were able to pass through the net, so they made their way in in their own time.  We put some raspberries inside the hen house.  Mrs Mills went in and nested – yes!  We thought we had it cracked.  We removed the netting so they would be free to wander in the morning.

Day 4.  Mrs Mills, now wise to our plans, nested early in the hedge some way from the new hen house and secure area.  We had to wake her and entice her with more pasta.  Fortunately, tasty bits were more than tempting and we secured her again.  Faced with no choice (her old nest having disappeared), she went into the hen house.

Day 5.  Mrs Mills chose to roost in the hen house with no intervention from us.  We were delighted, now they would be all be safe at night.  And she has slept there ever since.